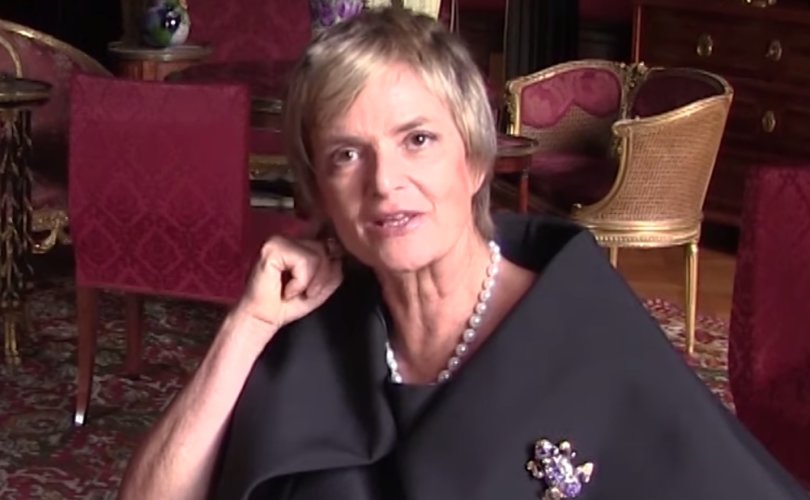 (LifeSiteNews) — Princess Gloria von Thurn und Taxis is a rare example of a wealthy aristocrat who has the courage and moral fortitude to publicly promote Christian values, even when she faces backlash.

The biography of the German princess

Born in Stuttgart in 1960 into an aristocratic family, the princess spent her early childhood years in Togo and Somalia, because her father worked there as a foreign correspondent.

She married Johannes von Thurn und Taxis in 1980 and the couple had two daughters and one son.

In the 1980s, Gloria became known as a high-society princess who partied with the rich and the famous around the world, touting wild hairstyles and outfits. “We never went to bed before 5 a.m. in the morning,” the Princess said in an interview. Vanity Fair dubbed her “Princess TNT” and other media outlets referred to her as the “Punk Princess.”

After her husband died in 1990 in the aftermath of a heart surgery, Princess Gloria took over the family estates and rehabilitated the ailing business with the help of experts. The princess was such a good manager that she made Business Week’s list of best finance managers, coming in at number 10.

Her family’s castle St. Emmeram in Regensburg, Germany, has more than 500 rooms and is known all around the world. The Princess has hosted VIPs from all walks of life there from pop-music giants Michael Jackson, Mick Jagger, and Elton John, to Catholic Cardinals Gerhard Müller and Joachim Meisner.

After her husband’s death, the Princess deepened her Catholic faith and became more outspoken on pro-life and pro-family issues.

Standing up for life, family, and the Catholic faith

Princess Gloria has supported the Catholic Church’s mission with her charity work and with her public promotion of Catholic principles.

In 2008, Pope Benedict XVI appointed her to “Commanderess with Star of the Order of St. Gregory,” one of the highest honors of the Holy See for lay Catholics. Cardinal Müller, who was bishop of Regensburg at the time, said that the honor was justified since the Princess was a courageous Catholic who has been standing up for the Christian faith and the Church for years.

“I am particularly impressed by her great interest in the doctrine and tradition of the Church, as well as her natural loyalty to the Pope and bishop,” Müller said of Gloria.

The Princess has been active in the pro-life movement and publicly called out the “culture of death” and also condemned the sexualization of children by LGBT propaganda. Moreover, she publicly criticized the rampant promiscuity in today’s Western society and spoke out against contraceptives.

In an interview in 2020, the Princess said she “decided early on to fight on the side of the good guys, for the faith in God.”

The princess was never afraid to make controversial statements. In a 2021 interview with LifeSiteNews, she was very critical of Pope Francis and compared the current times in the Church to the Nazi era:

Today, we live in a time where the Pope thinks he can appease the emperor by showing he can be compatible with what they want. That’s an illusion. We know this in Germany because the Church also tried this strategy in Nazi time, and it didn’t work. They all landed in concentration camps.

READ: German Princess warns Catholics not to make same mistake as those who failed to fight the Nazis

The princess loves the Traditional Latin Mass and was highly critical when Catholic bishops closed the Churches during the COVID fiasco. She was not shy in criticizing the draconian COVID-related measures and the powerful people behind them.

“Whoever sits on the steering wheel of power wants more power,” Gloria told LifeSiteNews editor-in-chief John-Henry Westen. “And, therefore, we can see that all of these measures that have been taken during the pandemic come in very handy for governments who seek to have more power over their subjects. And it is our duty to fight that.”

READ: Princess Gloria: Global elites think they do good but actually serve the ‘prince of the world’

A special person with a special sense of humor

Princess Gloria is also known for her unique sense of humor, which makes her an interesting guest for every talk show and interviewer but also gets her in trouble sometimes.

In an interview with German journalist Julian Reichelt, Gloria was asked about the German “Autobahn,” the famous highways that have no speed limit. The Evangelical church in Germany demanded a general speed limit on German highways to “protect the climate.”

Gloria did not agree with the proposal but rather thought that cars are meant to be driven fast sometimes in order to have fun.

“Don’t they know about ‘speed rush?’ We can’t all take cocaine. There must be something there for people who do want to take cocaine, but who only want to get high on speed.”

With her unique personality and sense of humor, Princess Gloria of Thurn and Taxis proves that you don’t have to be boring in order to be a faithful Catholic.