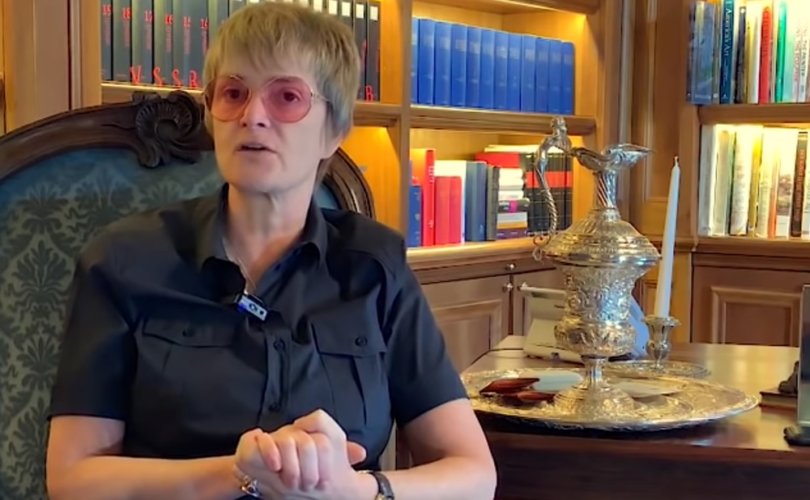 Nov. 14, 2019 update: Princess Gloria has removed her signature from the statement out of respect for her local bishop who distanced himself from the initiative. Read full report here.

November 12, 2019 (LifeSiteNews) – Today, more than 90 priests and lay scholars published a statement rebuking Pope Francis for his participation in and support of different pagan ceremonies and statues during the Amazon Synod in Rome. They reject the “sacrilegious acts” committed by Pope Francis, who publicly called the displayed and venerated pagan idols “Pachamama statues” and apologized for their removal from a Church near the Vatican by some Catholic men. The signatories also ask Pope Francis to “repent publicly and unambiguously of these objectively grave sins and of all the public offences that he has committed against God and the true religion, and to make reparation for these offences.”

One of the signatories is Gloria, Princess of Thurn und Taxis, of Regensburg, Germany. She is a prominent Catholic laywoman in Germany who repeatedly gives witness to her Catholic faith, not only by defending its teachings, but also by practical acts of mercy, such as feeding the poor in her castle in Regensburg.

LifeSiteNews reached out to her and asked her why she signed the new statement of protest. She answered, saying that “the ‘hoolahoola’ dancing in the Vatican gardens and the tasteless, carelessly displayed posters, pictures, sculptures and fabric, at the Traspontina basilica, was to show the world how tolerant and open the church is today towards other religions.”

But not only did she find these pagan ceremonies “tasteless,” at some points Princess Gloria also thought they had “something diabolical.” She comments: “Apart from the fact that the primitive circle dance in the church [in Traspontina], with horrible sounding groans had something diabolical, all of it was just bad taste. Well meant is often the contrary of right, is all I can say and this is the emphatic version of my criticism.”

The church Santa Maria in Traspontina was used by different pro-indigenous groups to display pagan items, practice pagan ceremonies, and also display posters with their messages. Several of the controversial wooden statues of the false goddess Pachamama were displayed, as well.

One of the posters depicted a naked indigenous woman who was holding a little child and at the same time breastfeeding a small mammal.

On another occasion, the organizers of these events would sit in a circle on the floor, some of them with their backs to the Tabernacle, and perform their own rituals.

It was these displays that led Alexander Tschugguel to take action. On October 21, he entered the Traspontina church and removed five Pachamama statues and discarded them into the Tiber River. As Tschugguel told LifeSite’s John-Henry Westen in an interview, he said that it “was really bad” what he saw in this church and that he saw in “these pagan idols really a break [violation] of the First Commandment.”

Thus, on October 21, “I wanted to bring pagan things out of a Catholic church.”

The more than 90 signatories of the new statement of protest against the pagan worship in Rome also say that pagan idols should not be in a Catholic church. They state that “the rendering of worship to anyone or anything other than the one true God, the Blessed Trinity, is a violation of the First Commandment,” and that therefore “absolutely all participation in any form of the veneration of idols is condemned by this Commandment and is an objectively grave sin, independently of the subjective culpability that only God can judge.”

Only recently, LifeSite reported on a statement that has emerged from the indigenous woman who had conducted the October 4 ceremony in the Vatican gardens, Ednamar de Oliveira Viana, of the Maués region in Brazil. She explained that this ceremony was intended to “satisfy the hunger of Mother Earth” and reconnect with “the divinity present in the Amazonian soil,” thus confirming the pagan nature of her ceremony.