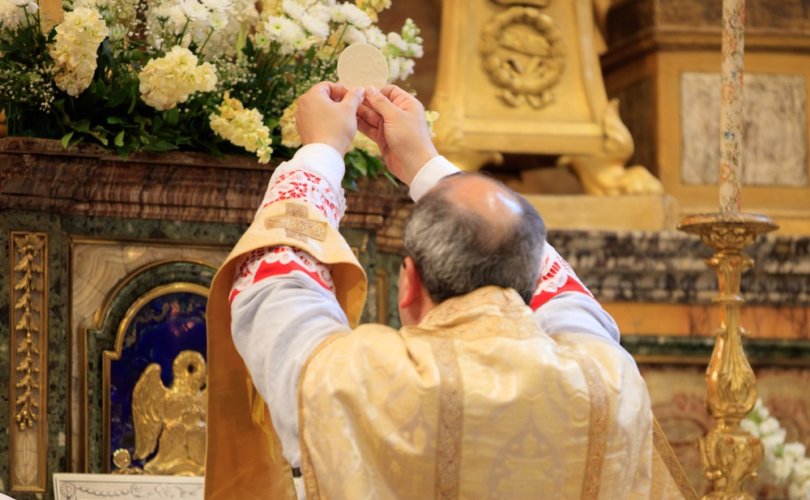 September 10, 2018 (LifeSiteNews) – A German theologian and book author has criticized the current responses of many bishops who, following Pope Francis' lead, claim that “clericalism” is the root problem of the current abuse crisis.

Dr. Markus Büning said in a September 8 article published in Germany that pinning the crisis on clericalism is a “smoke screen” that hides an ulterior motive. The full article is republished below.

“But there is also yet another reason for this diversionary episcopal smoke screen: the episcopal side now blames everything on the lower clergy who are supposedly infected by this self-aggrandizing clericalism. And, herewith, especially those priests are being defamed who have wished to do only one thing for all these years: to be loyal Catholic priests!” said Büning.

Büning sees that most bishops are now helping to set up a leader cult and an unconditional defense of the Pope because they hope to receive a “new Church from Francis: The Church of arbitrariness.”

They hope that he will implement their wished-for reforms in liturgical, moral, and doctrinal matters, he said.

The German theologian further argued that these bishops have for decades omitted exercising their duties with regard to maintaining the Church's traditions when faced with “liturgical abuse, abuse of the pulpit, heretical religious instruction, disfigurement of Church interiors,” and he himself now finds their current “conformist episcopalism” quite “pitiable.”

“Clericalism” is not the problem, but high-ranking diversionary maneuvers are

For days now, we had to listen to a constant repetition on the part of our supreme shepherds that the root problem of the abuse crisis – that is, the sexual abuse of children and youth by clergymen – is clericalism.

Pope Francis made the first charge here in his letter to the faithful.

His episcopal vassals seem to follow him as if in a united front. See here only one example of these many voices in the public statement of Bishop Dr. Genn of Münster.

There are manifold reasons for this now well-established meaningless phrase about the purported clearing up [of the abuse crisis]. For one, it helps us not to talk about the root problem. Bishop Eleganti from Switzerland, however, was the one who put his finger into the wound, in spite of all the obfuscation, when he referred to the root problem of homosexuality in the clergy.

And that is exactly what the Pope and the shepherds who are totally devoted to him do not want to hear. Why? Because they fear to be burned by the media of this world as being homophobic and old-fashioned, or out of date. This is very transparent.

But there is also yet another reason for this diversionary episcopal smoke screen: the episcopal side now blames everything on the lower clergy who are supposedly infected by this self-aggrandizing clericalism. And, herewith, especially those priests are being defamed who have wished to do only one thing for all these years: to be loyal Catholic priests!
Yes, especially these clergymen who wear the cassock and who keep to the rubrics of the missal and who celebrate the Holy Mass in a worthy manner. It is especially they who now come under the assault of the episcopal problem-solvers. It is especially these priests who are now, obviously, to be hit by the slogan “clericalism.” All of this is very dangerous!
And who is guilty of it? The bishop of Rome and all those bishops who, out of nowhere, suddenly discover the importance of loyalty toward the Pope. Why? Because it only fits into their agenda! It is all very transparent! Only suddenly, some bishops demand unconditional loyalty toward the Pope. Under Benedict XVI and John Paul II, I never heard such words from the German episcopacy. Why is it now different?

Because one hopes to receive a new Church from Francis. The Church of arbitrariness, in which anything goes and one can finally, finally please the world; yes, where one may finally expect the praise of nearly everybody. That is by the way also the reason why the secular media currently are mostly quiet about the Church scandals.

The shepherds wish to protect the Pope whom they see as being so wonderfully reformist and they themselves thus participate in the work of a diabolical cover-up. For, omitted reporting is also Fake-News-Reporting!

Intercommunion, Communion for the remarried divorcees, blessing of same-sex partnerships, Masses without clear rubrics, everything ad libitum [at one's pleasure]. That seems to be the Church which these shepherds now expect and eagerly await.

Some of them even go so far that rebellious women are sensing a further change and even imagine themselves already with a chasuble on the altar. In one dean's office of the Diocese of Münster, there takes place already a conference for Church employees concerning the topic of female deacons. The responsible dean invites this, and the responsible bishop is silent.

It is exactly this Church that is now obviously being desired; and for this ideal, Francis seems to be the figurehead who is now being protected with the help of a mentality seeking an episcopally demanded inviolable leader cult, and doing it in a completely uncritical and devoted manner. The whole thing is getting close to a sacrifice of the mind, at any cost. Yes, the head thereby spins!

Such a thing perhaps has never before happened in the Church. This trick seems to be a novelty in the history of the Church, a novelty which now shakes the unity of the Church to her foundations. And all those bishops who now act in this [devotedly uncritical] manner should permit themselves to be asked whether it is not they who are abusing their power.

Yes, they are thus themselves hit by the accusation of an unconstrained clericalism in the form of a bourgeois episcopalism which aims at only one thing: to please the world.

And now I ask these bishops where they ever made use of their power during the last decades, concerning the following themes: liturgical abuse, abuse of the pulpit, heretical religious instruction, disfigurement of Church interiors; and so forth?

The office-drawers of German ordinariates are filled with letters of complaint concerning such matters, and most probably the letters have already been shredded. They did as much as nothing, these bishops; bishop means, by the way, overseer or supervisor [Aufseher], and not someone who averts his glance and looks away [Wegseher]! This whole thing is only anymore pathetic.

These “shepherds” have permitted for the most part, over decades, that this Church turned into a caricature, in which faith and piety have mostly evaporated. Yes, and when there were some fellow bishops who thought differently, then there was only one wish: to get rid of them as soon as possible. Here, we may think of Bishops [Walter] Mixa and [Franz-Peter] Tebartz van Elst. These prelates did not go along with the usual feel-good Catholicism of a West-German character, which by now has also infected the Eastern German diaspora which had mostly been preserved during the time of the Communist persecution in the GDR [German Democratic Republic].

As long as these bishops do not start to exercise their ecclesiastical office as it is given to them by God and as it is exercised according to the Church's tradition, they are facing the accusation of conformist clericalism which is not willing to fight the abuses in this Church. No, on the contrary, these abuses have seemed to give only another platform for a further deformation. All of this is only to be pitied.

Note: Translation from the German by LifeSiteNews’ Maike Hickson. This article is published with permission from the author.