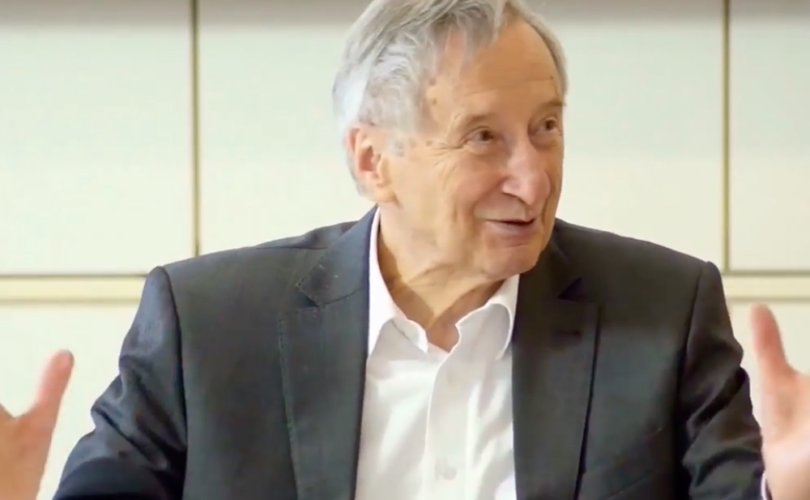 March 13, 2019 (LifeSiteNews) – Professor Peter Hünermann – a German theologian whose work influenced Pope Francis’ Amoris Laetitia and who recommended to the Pope the establishment of a commission on the female diaconate – said in an interview last week that he sees a “sign” that Pope Francis might be open to a female diaconate.

Speaking on March 8 with the German bishops' news website, Katholisch.de, Professor Hünermann – a retired theology professor of the University of Tübingen – related that, according to his own sources, the Vatican commission on the female diaconate did not endorse the idea of female deacons. But he nevertheless thinks that Pope Francis does not agree with the report of this commission.

In 2016, the German professor had personally recommended to Pope Francis that he establish a commission on the history of the female diaconate and on the “admission of women to the diaconate” in the Catholic Church, as Hünermann openly revealed in 2017. Asked about the results of that commission – which Pope Francis indeed established in 2016 – Hünermann explained that the final “statement of the study commission has not yet been published.” (According to one of the commission members, Professor Karl-Heinz Menke, that report had been finished in June of 2018 and handed over to the Pope.) The report, said Hünermann, came to the conclusion that “one cannot decide this question [of the female diaconate].” As another report has it concerning this same commission's report, the historical sources are too scarce to give a fuller picture of the history of the female diaconate.

For Hünermann, however, the fact that the Pope “has withheld the results for months now, is a sign for me that he does not agree with this statement as it stands.”

Further explaining his own position in the matter, the German professor said that for the Eastern churches “the female diaconate was taken for granted. Only recently, the [Orthodox] Eastern churches have reintroduced the female diaconate.” Thus, he added, “I do not understand how one reasonably can claim that participation of women in the ordained office is impossible.”

The German theologian pointed to the discussion about the Amazon region, saying that there, “perhaps once a year, a priest comes by and married couples are leading the parishes.” He asked why it is that only men “are given this responsibility?”

Professor Hünermann, according to a 2016 Commonweal Magazine interview, has worked on this topic for “over forty years.” He said he was “happy” when he heard that Pope Francis established a commission to study the issue of the female diaconate. “I think the women diaconate would be a great step toward integrating women sacramentally into the service that they already do.”

In that same interview, Hünermann revealed that he has known Pope Francis personally since 1968 and that they met together for years “almost once per year” in Buenos Aires, and that he often stayed at then-Jorge Bergoglio's Jesuit seminary residence when visiting and teaching in Argentina. He also recounted how the Pope invited him for a one-hour conversation at the papal residence Santa Marta in May of 2015 in preparation for the apostolic exhortation Amoris Laetitia. He also explained that he prepared a paper ahead of this meeting with the Pope and that he presented to him arguments as to why papal documents such as Casti Cannubii (1930) were “too narrow,” and why at times a marriage can “break down.” “If there are children and so on,” he explained, “one has to deal with the individual situation and attempt to find a pastoral situation.” The German theologian also describes some of his thoughts on the nature of the Sacrament of Penance, at which it is the essential point that the penitent “must manifest his will to be reconciled.” “Satisfaction here is not the application of a law or a decree,” he stated.

Thus, the German professor pointed out that Amoris Laetitia points to a new understanding of “reconciliation,” and of the discussion with a priest which “leads to a possibility of reconciliation with God, and it opens the door to receive the Eucharist.”

In the March 8 Katholisch.de interview, he also discussed the strong criticism that he had repeatedly received from Pope Benedict XVI (as well as from then-Cardinal Ratzinger) because of his liberal views. Then-Cardinal Joseph Ratzinger even once called the German theologian the “President of the Socialist International,” when Hünermann had been elected President of the European Society for Catholic Theology. When meeting with Ratzinger in Rome, explained the German theologian, the then-Prefect of the Congregation for the Faith said to him: “So, Mr. Hünermann, now you are the President of the Socialist International.” In his view, Ratzinger then had a critical “monologue” about the state of moral theology in Germany and about individual German theologians, and “it was terrible,” said Hünermann.

Hünermann had been part of the strong German opposition against Pope Paul VI's encyclical Humanae vitae which forbade the use of contraceptives. He had signed the 1989 Cologne Declaration against – among other things – Humanae Vitae, and this act of resistance was, according to him, “diplomatically defended” by then-Bishop Karl Lehmann, the later President of the German Bishops' Conference which was later told, in 1999, by Pope John Paul II not to participate in the German system of counseling pregnant women, which can provide a counseling certificate for a legal abortion.

It was Professor Hünermann who, in 2018, was the object of the “Lettergate” affair surrounding a set of books written about the “Theology of Pope Francis,” one of which had been written by the same German theologian. Pope Benedict, in a letter that was published in part by Monsignor Dario Viganò (without Benedict's permission), stated that he would not contribute a foreword to a set of books that had Hünermann as one of its authors. The retired Pope explained his own decision with the fact that this German theologian was known for his “anti-papal” initiatives. Benedict wrote:

Only as a footnote, I wish to note my surprise over the fact that Professor Hünermann, who during my pontificate distinguished himself for spearheading anti-papal efforts, is also featured among the authors. He was a key figure in the release of the “Kölner Erklärung,” which in relation to the encyclical Veritatis Splendor, virulently attacked the Pope’s magisterial authority, especially on issues of moral theology. Additionally, the “Europäische Theologengesellschaft,” which he founded, was initially conceived by him as an organization in opposition to the papal magisterium.

In response to this letter, the European Society for Catholic Theology made a statement on its website defending Professor Hünermann, stating: “However, it is with regret that we also note criticism of one of the authors of the collection of books that occasioned the letter, namely, Prof Peter Hünermann, who is a founder, the first president and now the honorary president of our Society.”

LifeSiteNews reached out to Professor Hünermann and asked for comment and more information on the Female Deacon Commission and Pope Francis' possible decision, but did not hear back from him.