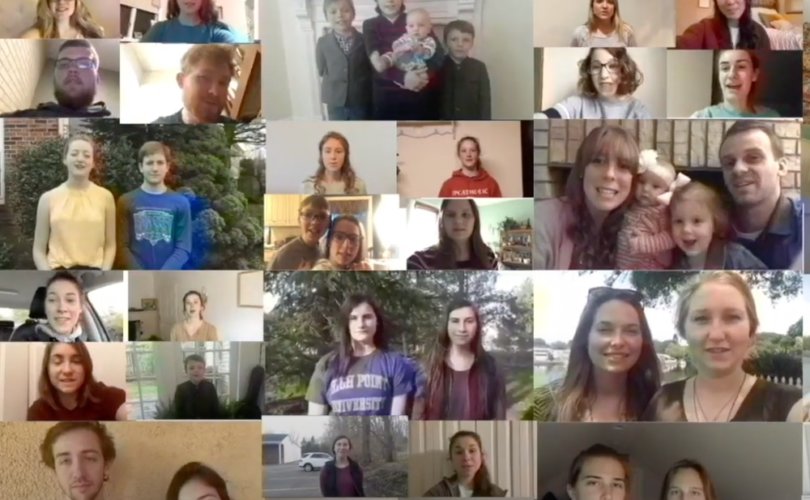 April 27, 2020 (LifeSiteNews) – Over the course of the last couple of days, there have emerged in the world videos made by mostly young Catholics asking their local bishops to “give us back our Mass!” It all started with a video made by Austrian young Catholics. Soon, Catholics in Spain, France, Argentine, Germany, Sweden, England, Wales and Scotland, as well as the United States made similar pleas.

As LifeSite reported, the Austrian youth published a video on April 19. LifeSiteNews has now learned it was a 22-year-old student from Vienna, Austria, who started this project.

Theresa, the 22-year-old organizer, told LifeSite, “I had the idea for the video after small businesses were allowed again to open and I realized that one could also apply the same safety standards in churches, and perhaps even better.” She says that she then spoke with some friends “and all immediately said that they were willing to volunteer for such a service!”

On the one hand, this video by Catholic youth in Austria was meant as “a serious offer on the part of young Catholics to help the bishops and priests to re-introduce the Holy Mass as soon and as safely possible.” In addition, Theresa explains, the video was also meant “as a sign for everybody who sometimes loses hope when seeing the empty churches (even before the times of the coronavirus) or when thinking that young people are not interested in the Faith.”

“We wanted to show the world that we are here, that we yearn for the Holy Mass and that we wish to be at the service of our bishops in these difficult times,” the young student concludes.

In the original Austrian video – which was published also with English, Spanish, and French subtitles, the young Catholics state, “We want to support our shepherds and offer our help” and “we will be there during the Mass to make sure nobody is less than six feet apart.”

Since that first April 19 video, there have been numerous videos made with similarly touching words and scenes. In many of the videos, there can be seen young Catholic families with several small children, asking for the Holy Mass. Little children ask to have back the Mass and tell their bishops, “we are praying for you!”

One young German says: “Dear bishops, you are our shepherds,” and a young woman continues the sentence: “why don't you do something that we may go again to Mass?” Another young woman adds: “We do not need a [live-streamed Jesus], we need His Real Presence!” A young boy offers his services as an altar boy, promising to “make the church corona-free” after each Mass. A little boy, standing before an altar, says with a sweet voice: “Please give us back the Holy Mass.”

The French video shows different kinds of shops (such as grocery stores, post offices, chocolate shops) which are open, while the Mass is not accessible. They quote St. Padre Pio, who once said: “It would be easier for the earth to exist without the sun than without the Holy Mass.”

American youth in their video say that “essential businesses are open,” adding “but what can be more essential to us than the Mass?” They, too, offer their bishops their help, to sanitize the churches, help maintain social distancing standards, and organize lists for limited groups of participants so that they can be opened again. Here, too, little children ask: “Please give us back the Holy Mass!”

These videos are an inspiring example of Catholics who love their faith, and especially the Holy Mass, and who are willing to do extra efforts to be able to have it back again.

Other initiatives have now been taken, as well. An Irish petition with so far 1,400 signatures addresses Archbishop Eamon Martin, the Primate of All Ireland, and ask him to “restore the sacramental life of the People of God,” and some 130 French priests have written an open letter to the French President Emmanuel Macron asking for the reinstatement of public Masses on May 11. A French priest – whose Mass was recently interrupted by policemen carrying weapons – calls for the reopening of public Masses by May 11, as well.