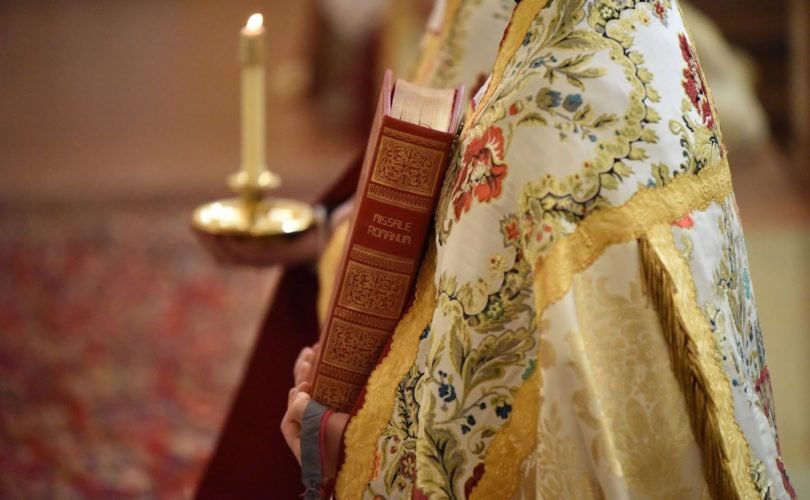 Server holding the Roman Missal during a Pontifical High Mass

July 27, 2021 (LifeSiteNews) — In the “bad old days” that Vatican II cheerleaders have to exaggerate in order to make their lame duck council look like something other than a disaster, it is said that the laity were passive, disconnected from the liturgy, lacking in a personal prayer life, and unaware of their dignity as “the People of God.”

Over the years, I have been blessed to know many friends and acquaintances who were children, youths, and young adults in the years before the Council, and whose memories — as one might more realistically expect — run the gamut from positive to negative. It does no good to deny that some people had particular bad experiences of the “old Church,” but it is no more honest to disregard the numerous stories of selfless sisters, dedicated priests, exemplary liturgies, and rich Catholic customs sustained by a laity who were engaged in a varied prayer life that centered on the Holy Mass, Confession, and devotions to the saints.

One hobby I’ve always enjoyed is visiting used book stores — I wouldn’t be able to count the number I’ve visited over the decades, all across the country. And one thing that has impressed me is how often I stumble upon old hand missals and devotional books for Catholics, sometimes with multiple names written in the front, with prayer cards at various pages, and with all the evidence of careful long-term use (such as smudges where fingers held open the Order of Mass thousands of times). These were not books to buy and put on the shelf as status symbols or decorations; they were practical books, companions along the way to heaven, uniting the faithful to the court of saints, the Queen of Heaven, and Christ the King. Recently an American bishop shared a photo of his mother’s old missal, where you could see a bit of her lipstick: As the priest would consecrate the host, she would kiss the words. Prompted by this photo, Fr. John Zuhlsdorf wrote an eloquent description of what actual participation in the Mass is, and what obstacles to it look like.

I have learned a lot over the years from such preconciliar books, stumbled upon at random. Some I have kept for actual use, now that the traditional liturgy has come back and the old has become new again (in spite of vain efforts to derail or even deep-six it); others are retained for study purposes (this is especially the case with transitional books from the 60s and 70s, or much older volumes in poor condition); still others are given away to those who may benefit from them.

One thing that emerges clearly from the “old days”: Catholics had so many and such rich prayer books available to them! And they used them till their bindings wore out and the ribbons frayed. Many people I’ve talked to from that generation had their own daily missal, their favorite devotional book, their “My Daily (This-and-That)” — solid stuff, and very often directly connected to the liturgy.

It is an irony that bears emphasis: In many ways Catholics before the Council were vastly more liturgical than they are now, after heaven and earth were shifted to make liturgy “easy to access.” The easier it became, the less Catholics cared to be liturgical. The more the Mass was put forward as the be-all-and-end-all, the less Catholic prayer life could be nourished by all the devotions, customs, and rituals that crowd around the Mass, prepare for it, and show forth its prominence. The irony is that the moment liturgy was “opened up” in the vernacular and with abbreviated simplicity, it ceased to exercise a dominating power, because what made it special and different had evaporated. We transitioned from a dense and slightly intimidating forest with occasional clearings where one could rest, to a flat grassy field with bleachers, all exposed, all ready for crowd participation. No wonder the cult of sports and pop music outperformed the Church’s mode of engagement. Her leaders gave up the one strange thing of maximum difference she had to offer over against the modern world.

Let’s have a look at an exhibit. Here is an excerpt from My Daily Prayer, published in 1955 by the Confraternity of the Precious Blood in Brooklyn, New York. The title page boasts of the content: “Daily Prayers, Seasonal Thoughts, Lives of the Saints.” Inside, we find a short life of each saint on the old liturgical calendar — the one still used wherever the traditional Latin Mass is found — that draws some practical lesson from that saint. They do this even for the “obscure” saints that the reformers of the sixties purged as “irrelevant” from the 1969 calendar of the Novus Ordo.

On July 28, for example, we have the feast of Saints Nazarius and Celsus, martyrs; Pope Victor I, also a martyr; and Pope Innocent I. It’s a bit of a hodge-podge, like certain other days in the year, but that’s no matter: We rejoice in the victory of these martyrs and the heroic witness of these saintly popes, which offer us a providential occasion for confessing our Faith in spite of persecution and of confirming our communion with the See of Peter that officially teaches only the true Faith and stands in judgment over anyone — including popes themselves — who fail to uphold it.

Here is how the meditation for July 28 runs in My Daily Prayer. Note the vigor, the toughness, the earnestness, the proper pride in it, and the way it expands on the Collect of the day:

Nazarius and Celsus were martyred at Milan about the year 68. Victor I, born in Africa, suffered martyrdom about 198. Innocent I died in 417. These Saints, each eminent in his own time, are links in the glorious chain of Martyrs and Confessors which stretches from the days of our Lord to our own, and will continue its unceasing witness to the truth of the Catholic Faith and the vitality of the Catholic Church, even to the end of time. Conscious of our inability to do anything without divine help, we pray today that the glorious examples of these champions of God may be our defense and the strength of our weakness. In this life our profession of the Faith will entail many trials and griefs. While, probably, these will not require the shedding of our blood, they will cause us a certain amount of suffering. But we know that God, if we persevere in loyalty to Him, will glorify sorrow, transforming it into joy everlasting.

(To read more about the great Mass on their feast day and what lessons it teaches us, have a look at this article: “‘The heathens have defiled Thy holy temple… Revenge the blood of Thy saints!’: On the Thymotic Realism of the Traditional Latin Mass”)

After decades of praying with a daily missal, I have come to love the more obscure saints because they remind me of what a far-flung, extravagant, civilization-straddling, centuries-old religion we belong to. That is the religion I intend to practice, in all its traditional glory, to my dying day, and it gives me joy to see that the number of those who are of like mind and heart is growing apace.