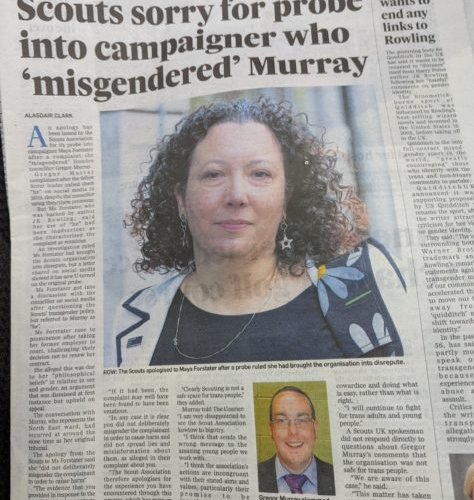 (LifeSiteNews) — On the heels of my depressing Tuesday column on how we are losing the war against gender ideology in the courts in the United States, my cynicism has been rebuked by two good news stories out of the United Kingdom.

The first is the victory of Maya Forstater, an assistant Cub Scout leader from St. Albans who became the center of a firestorm of controversy in 2019 after objecting to the transgender policy of the Scout Association, which allowed boys identifying as girls to sleep, change, and shower with the girls. Forstater argued that this policy would lead to the elimination of female-only spaces.

Forstater immediately acquired a target on her back, and when, during a debate on Twitter, she referred to bearded Scout leader Gregor Murray as a “he” rather than his preferred pronoun “they,” she was reported to the Scout Association. Despite the fact that Murray had used foul and misogynist language on social media himself (and had been suspended as a local councilor for doing so), Forstater became the subject of an investigation by the Scouts.

It was at this point that J.K. Rowling famously made her first foray into the transgender wars, tweeting her support of Forstater: “Dress however you please. Call yourself whatever you like. Sleep with any consenting adult who’ll have you. Live your best life in peace and security. But force women out of their jobs for stating that sex is real? #IStandWithMaya #ThisIsNotADrill.”

After a ludicrous two-year investigation, Forstater has now received an apology letter from the Scout Association. As feminist Julie Bindel noted in Unherd: “Trans activists are in retreat. With a number of high-profile victories won by feminists refusing to be silenced by the deafening chants of ‘trans women are women,’ momentum against the trans lobby is picking up speed.”

Bindel must be very gruntled about another recent victory, as well. Regular readers of this column may remember the story of Harry Miller, the docker from Humberside who ended up getting investigated by the police for tweeting out a limerick about men claiming to be women. Miller was told by the police that his tweet was “the kind of thing that upsets the transgender community.” In fact, Miller was one of thousands of people reported to the police under the category of a “non-crime hate incident.”

Miller challenged the police designation of “non-crime hate incident,” and on December 20, he won. From Dan Hitchens in Unherd:

This morning the Court of Appeal ruled that the official guidance, drawn up by the College of Policing, unlawfully contravenes the right to free expression.

The legal challenge was brought by a Lincolnshire businessman called Harry Miller, who was visited by police in January 2019 and told that his tweets on the trans debate constituted an NCHI. They had picked on the wrong man. When I spoke to Miller earlier this year, he observed that, as an ex-copper, “the mystique of the police just doesn’t exist for me.” Being an independent businessman also helped: “One of the things the police said to me was, ‘Well, if your place of work knew what you were doing, you could be in trouble with your HR department.’ I said, ‘I am my ****ing HR department!’” He and a friend founded an organisation, Fair Cop, which brought the legal action and has now seen it through to a significant victory.

Trans activists have been using everything at their disposal to enforce the tenets of their ideology on everyday people. Over the past several years, everyday people are pushing back — ordinary people who volunteer with the Scouts Association or run their own businesses. It appears that the common people are finally winning.