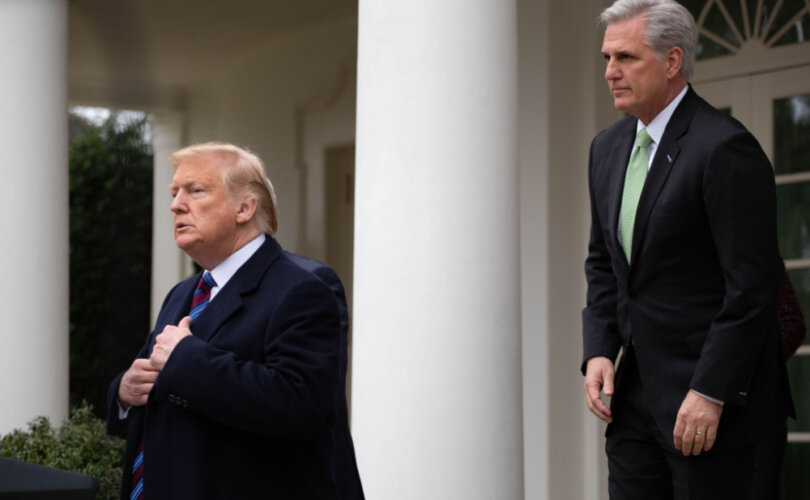 (LifeSiteNews) — The Republicans will take control of the House of Representatives and have a chance to control the Senate.

Yet the anti-MAGA media, assisted by RINOs like Karl Rove and has-been Paul Ryan, are braying as loudly as they can that it’s all Trump’s fault Republicans did not win more races.

I suppose this shouldn’t surprise us, since many of these same characters have been playing “get Trump” since the day in 2015 that he announced he was running for president.  The pro-life, MAGA base of the Republican Party has largely come to see these attacks for what they are: an effort to cover up the failures of both the Democrat and Republican establishment by reflexively blaming the people’s champion.

And now, as we wait for the final outcome of dozens of races to trickle in — almost all in Democrat-controlled states, curiously enough — the Never-Trumpers are following this same playbook. Every Republican win is passed by in silence and every loss is immediately blamed on Donald Trump.

The truth is exactly the opposite. As the former president himself noted, smiling broadly, “I deserve full credit for every win, and no blame for any loss.”

The mainstream media mocked him for saying this, but it is in fact true. Consider all the ways in which President Trump helped over the past 18 months to get Republican candidates over the finish line:

While the media may be willfully ignorant of the contribution that President Trump made in close races across the country, longtime Republican Party insiders like Rove and Ryan are well aware of his impressive record. But they also know that most of the Senate and House Republican campaigns were directed by operatives whose primary allegiance was to the McLeadership: Mitch McConnell, Kevin McCarthy, and Ronna Romney McDaniel.

How this works is straightforward. If you want campaign cash from the House and Senate PACs, controlled by McCarthy and McConnell, respectively, then you have to take advice from them on how to run your campaign. In some cases, you will even be asked to cede day-to-day control of your campaign to operatives from Washington, D.C.  It is understood that, if elected, you will vote for your benefactors to continue as party leaders.

All such machinations occur behind the scenes, of course. Did you ever see McConnell on the campaign trail in the last election cycle? Of course not. He is deeply unpopular with the Republican base, who understand that he represents the Wall Street wing of the Republican Party, is disdainful of much of the Party’s base, and has proved unable or unwilling to check the excesses of the Biden administration over the past two years.

Republican senatorial candidates in battleground states were often outspent five- or 10-to-1 by their Democrat opponents this election cycle. The disparities are staggering:

But McConnell has not only failed to support Republican candidates in key Senate races, he has actively worked against them. The clearest evidence of betrayal comes from Alaska, where the local Republican Party in 2021 censured Senator Lisa Murkowski and instead endorsed Kelly Tsibaka as their candidate.

Instead of respecting the will of the voters in Alaska, McConnell is supporting his longtime ally. He has given $9 million to Murkowski’s campaign, a huge amount of money for a state with a population of only 733,000. Had even a portion of this money been given to other Republican candidates in tight races, the Senate might now be securely in Republican hands.

But it gets worse. In the closing months of the campaign, McConnell took money previously committed to the campaigns of Masters and Bolduc and sent some to his hand-picked Senate candidate in Colorado, Joe O’Dea. That is to say, he sacrificed two MAGA candidates in close races to a self-declared Anti-Trump Republican Establishment candidate who had no chance of winning.

McConnell’s chief purpose in life is continuing as Republican leader in the Senate, and it seems he doesn’t much care whether his party is in the majority or the minority as long as this happens. So if you are looking for the cause of our electoral disappointments, especially in the Senate, you need to focus on Mitch, not President Trump, who did everything he could to get good candidates across the finish line. In fact, it is McConnell’s allies who seem to be behind the Blame Trump campaign.

A final word on the Florida election and Gov. Ron DeSantis, whom I campaigned and voted for. He won big because he’s a good man and has done a good job as governor. He did not fall for the Covid hysteria, has signed pro-life, pro-family legislation, and has coped well with the natural disasters that periodically strike the state. In addition, Republican Party activists cleaned up the voter rolls and kept a close eye on the voting machines throughout the election.

It is also true that Ron was, far and away, the best funded of the Republican candidates. He raised some $200 million, with almost all coming in the form of large donations from the Republican establishment and Wall Street, far more than he needed for the governor’s race. He was further helped by the fact that the Democrats pulled a “McConnell” in the months before the election, pulling out their funding and effectively bankrupting the campaigns of their own candidates for governor and senator.

With its virtual celebration of DeSantis’ victory, the Left has made clear that it would much rather face DeSantis in 2024 than Donald Trump. The left-wing propaganda outfit formerly known as The New York Times, for example, has declared that the Florida governor is now the front-runner in 2024.

It is worth asking ourselves why the Left is so eager for DeSantis to run that it is virtually endorsing him.

The answer is that it fears the Donald Trump-led MAGA movement, which has brought millions of blue-collar workers of all races across party lines into the voting booths in the last three elections.

This, and only this, is the reason that there is so much orchestrated hate being directed at Trump by both Democrats and establishment Republicans.

They see him, quite rightly, as the primary threat to their continued uni-party rule. They see us, on the other hand, as rubes and hicks who can once again be easily manipulated once Trump is out of the picture.

Are we done being gaslighted yet?

Steven W. Mosher is the president of the Population Research Institute and the author of The Politically Incorrect Guide to Pandemics.