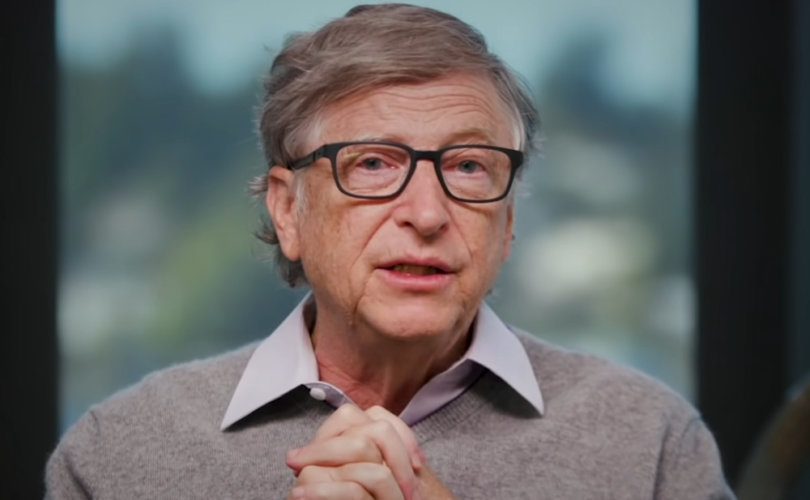 January 22, 2021 (LifeSiteNews) — One of the most wealthy, influential, and controversial men in the world, Bill Gates, is the leading owner of private farmland in the U.S., now holding 242,000 acres.

Gates “has built up a massive farmland portfolio spanning 18 states,” Forbes reported, noting that his largest holdings are in Louisiana (69,071 acres), Arkansas (47,927 acres), and Nebraska (20,588 acres). He holds the land directly and through third-party entities by Cascade Investments, revealed The Land Report.

While the report did not specify what he is doing with the land, Gates has been quite vocal about his vision of the future of food and farming — and he puts his money where his mouth is.

Gates’ food-related investments support initiatives that dovetail with the World Economic Forum’s “plans for the ‘reset’ of food and agriculture,” which “include projects and strategic partnerships that favor genetically modified organisms (GMO’s), lab-made proteins” and chemicals “as sustainable solutions to food and health issues,” according to Children’s Health Defense.

Gates has championed and invested in GMOs, pesticides, and plant-based meat alternatives for the same reasons the World Economic Forum does: It is all in the name of sustainability, alleviating hunger, and fighting climate change.

Gates shares his enthusiastic support of GMO seeds in one of his own YouTube videos, “The Future of Farming.” He goes so far as to describe a “Green Revolution” that is “based on new seeds,” calling it “one of the great breakthroughs of all time.”

In 2016, Gates explained to the Wall Street Journal’s Rebecca Blumenstein at the World Economic Forum in Davos that such “new seeds” — in other words, genetically modified seeds — are an “incredible” innovation because of their “resilient” and “yield-enhancing” traits.

Gates explains that it is these qualities which make GMO crops a useful tool to help combat starvation in places like Africa. As an example of the power of GMOs to fight hunger, Gates has lauded the development of “more than 150 new maize varieties that could withstand drought conditions” by CGIAR, “the world’s largest global agricultural research organization.”

Just last year, Gates launched an initiative that aims to expand the use of such GMO seeds. In January 2020, the Gates Foundation founded “The Bill & Melinda Gates Agricultural Innovations LLC”, known as “Gates Ag One,” headquartered in St. Louis, Missouri.

Gates Ag One will create partnerships to “enable the advancement of resilient, yield-enhancing seeds and traits globally,” and help bring these “breakthroughs into specific crops essential to smallholder farmers,” the Gates Foundation said in its release.

The CEO of Gates Ag One is Joe Cornelius, who was formerly the food, nutrition and technology development executive at Bayer Crop Science, and “in the 1990s was Director for International Development at Monsanto.” The drug and biotech behemoth Bayer acquired Monsanto in 2016 for $66 billion dollars.

A former Monsanto employee is a natural pick for Gates’ pro-GMO agriculture strategy, as Monsanto, which was founded as a chemical company, has been known as the leading producer of genetically modified and patented crop seeds since its scientists were among the first in history to genetically modify plants in the early 1980s.

Gates appears to back the mission of Monsanto at least enough to invest millions of dollars in it. When the Gates Foundation’s annual investment portfolio was published in 2010, it revealed that Gates had bought 500,000 Monsanto shares at around $23 million.

Prior to being acquired by Bayer, Monsanto held patents on crops making up enormous swaths of the U.S. food supply. Monsanto — almost a monopoly — sells approximately 90% of the genetically modified seeds used in the United States, and has been reported to control “roughly 95 percent of all soybeans and 80 percent of all corn grown in the U.S.” through their patented genes.

Monsanto has gained notoriety in the eyes of many as one of the world’s most evil corporations, in large part for peddling poison, with disastrous effects on human health, and lying and falsifying data about those effects numerous times.

Among the dangerous chemicals manufactured by Monsanto were PCBs, which were banned after fifty years for causing a spectrum of health issues; the insecticide DDT, which Dr. Morton Biskind argued destroys the central nervous system; and Agent Orange, which Vietnam has said contributed to the birth defects of half a million Vietnamese babies, and illnesses like cancer in as many as 2 million people after being used in chemical warfare.

In the early 1980’s, Monsanto began to develop genetically modified seeds with immunity to its own herbicide, RoundUp. Like many of Monsanto’s products, glyphosate-based RoundUp was reported to cause illness — in this case, cancer. Just last year, Bayer, after “inheriting” Monsanto’s lawsuits, paid out $10 billion dollars to settle an estimated 95,000 cases of cancer reportedly linked to the weedkiller.

While some chalk up the harmful effects of GMOs to the poisonous pesticides that often go hand-in-hand with them, a number of physicians consider genetic changes alone to be harmful to human health.

In 2009, the Academy of Environmental Medicine issued a call for an “immediate moratorium on genetically modified foods.” It cited animal studies showing that GM food could cause infertility, accelerated aging, and dysregulation of insulin, the immune system, and protein formation, among other harmful effects.

It is noteworthy that Klaus Schwab, executive chairman of the World Economic Forum, which proposes a global “Great Reset,” sees genetically modified crops as not only safe, but necessary to “global food security.”

In his book “Shaping the Future of the Fourth Industrial Revolution: A Guide to Building a Better World,” Schwab writes, “Global food security will only be achieved if regulations on genetically modified foods are adapted to reflect the reality that gene editing offers a precise, efficient and safe method of improving crops.”

Gates also believes in the power of science to “improve” livestock. For example, he has invested money into helping farmers produce “higher-yielding dairy cows and chickens which lay better quality eggs.”

However, Gates’ belief that “raising animals can take a big toll on the environment” suggests that livestock would take a backseat for any potential farmland development of his.

“How can we make enough meat without destroying the planet?” he asked in a blog post he wrote in 2015. “One solution would be to ask the biggest carnivores (Americans and others) to cut back, by as much as half.”

“I’m also hopeful about the future of meat substitutes,” Gates added, noting that he has invested in meat-alternative companies in order to further a more “sustainable future.” One of these companies is Impossible Foods, which was initially co-funded by Google and Jeff Bezos, in addition to Gates. The stated mission of Impossible Foods is to make meat obsolete in 15 years.

“I think people are increasingly aware plant-based products are going to completely replace the animal-based products in the food world within the next 15 years. That’s our mission. That transformation is inevitable,” Impossible Foods founder and CEO Patrick Brown told “Mad Money” host Jim Cramer in June 2020.

Meatless alternatives are a key part of a sustainable food future from the perspective of not only Bill Gates, but of the EAT Foundation, which describes itself as a “Davos for food” — Davos being the location of the yearly World Economic Forum meeting.

“According to Federic Leroy, a food science and biotechnology professor at University of Brussels, EAT network interacts closely with some of the biggest imitation meat companies, including Impossible Foods,” reported Children’s Health Defense.

“They frame it as healthy and sustainable, which of course it is neither,” Leroy told The Defender.