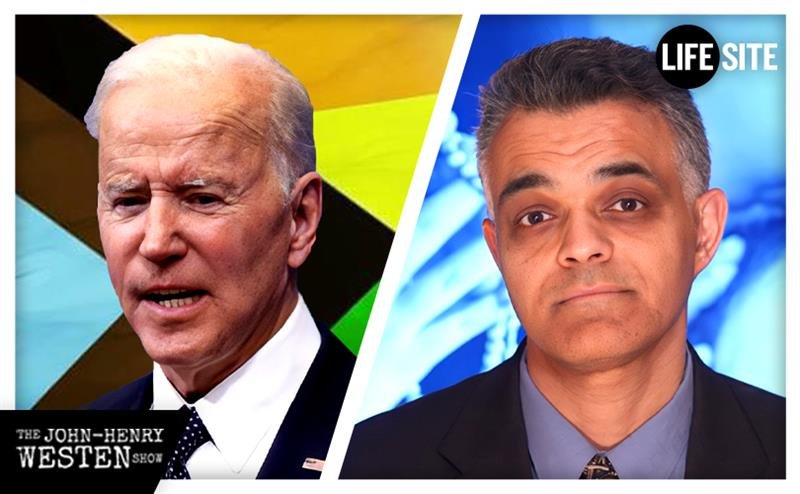 NOTE: In my video I mistakenly referred to St. Gemma when I meant St. Maria Goretti. I apologize for the error.

(LifeSiteNews) — On March 30, 2022, Joe Biden released a presidential proclamation for the so-called “Transgender Day of Visibility”:

The First Lady, the Vice President, the Second Gentleman, and my entire Administration see you for who you are — made in the image of God and deserving of dignity, respect, and support. On this day and every day, we recognize the resilience, strength, and joy of transgender, nonbinary, and gender nonconforming people. We celebrate the activism and determination that have fueled the fight for transgender equality. We acknowledge the adversity and discrimination that the transgender community continues to face across our Nation and around the world.

Yes, it is true that each of us are made in the image and likeness of God. The concept of imago Dei is central to our faith. But the transgender movement proposes a complete destruction of the way God made us. Scripture clearly teaches us, “And God created man in his own image: in the image of God he created him: male and female he created them…” (Genesis 1:27).

This same transgender movement tells our children to mutilate their beautiful God-given bodies and destroy who they are based on what they feel like at any given point in time. Surgeries that involve slicing off healthy breasts and penises and removing testicles are regularly referred to as “life-saving”; puberty blockers are presented as “essential healthcare” even though they cause irreversible injury; warning bells sounded by physicians and research illustrating devastating long-term effects are written off as “transphobic” propaganda.

LifeSite blogger Jonathan Van Maren has written about the scary graphic advice that is being given to kids with step-by-step guides on how to alter their body. The Doernbecher Children’s Hospital — take note, children’s hospital — in Portland, Oregon, has now produced a detailed guide on “tucking,” as well as advice on where transgender products can be purchased. This information is directed at children on how to disguise themselves as the opposite gender. If a boy is uncomfortable with his genitals or is experiencing gender dysphoria, the advice here is to tuck his male sex organ and his testicles between his legs to hide them rather than get comfortable in his own body. There is much more horrific information in the guide complete with diagrams which you can look up yourself.

Some kids as young as 13 are even crowdfunding their hormone “treatments” and “sex-change” surgeries. Children order binders and packers with credit cards and get them mailed in disguised packages after being told how to do so by transgender YouTube influencers they’ve been watching without parental knowledge. This information is unfortunately relevant to many parents who do not realize it yet.

Could there be a greater insult to God than to take the very body that He created for us, as He made us in His image and likeness, and to mutilate and destroy it? This madness is being aimed specially at our children who are being groomed by LGBTQ activists. It has entered our schools and our media.

A school teacher in Austin, Texas, said that of the 32 fourth-grade students in her class, 20 have “come out” to her as “LGBTQIA+,” according to a leaked internal school message. The Austin ISD (Independent School District) was under fire last week after guidelines for “PRIDE Community Circles” issued by Doss Elementary School were leaked, showing students as young as four years old were instructed to keep their LGBT class discussions confidential.

Earlier this month, a photo of a sign posted at a Wisconsin high school went viral showing a Mama Bear surrounded by three cubs — one rainbow-colored, one striped like the transgender flag, and the third colored blue and shades of purple. It read: “If your parents aren’t accepting of your identity, I’m your mom now #freemomhugs.”

Abigail Shrier examines in detail how families have been ruptured by the transgender movement in her book Irreversible Damage: The Transgender Craze Seducing Our Daughters. Children are encouraged to reject their natural families in favor of “glitter families,” consisting only of those who affirm every impulse.

The Genderbread Person was a concept developed to sell gender ideology to kids. The Genderbread Person is a teaching tool to inculcate kids into a worldview that tells them they can choose whatever gender they want to be (and there are scores of options); that these genders are functionally irrelevant to their bodies; and that both their “gender” and their body are irrelevant to their sexuality. This is being taught to very young children in schools from the United Kingdom to Canada, from the Royal Marines to the civil service, from Australia to the United States.

In lockstep with the LGBTQ agenda, Pixar’s new Toy Story spinoff film “Lightyear” is set to feature a “same-sex” kissing scene. LifeSite reporter Calvin Freiburger reported earlier this week that any lingering doubts about Disney’s social agenda were settled Tuesday with the release of leaked excerpts from a private “all hands meeting.” You should watch for yourself what they have to say:

Disney has also removed “Ladies and Gentlemen, boys and girls” from its Happily Ever After pre-show announcement:

Disney removes ”Ladies and Gentlemen, boys and girls” from Happily Ever After pre show announcement.

When we write about homosexuality and the trans agenda that’s poisoning our societies and corrupting our children, people often misunderstand and think that we’re bigots because we’re against people of the same sex indulging in sexual relations. Yes, sodomy is sinful, it is one of the four sins crying out to God for vengeance, and it is also contrary to natural law. We do not oppose just same sex acts; we condemn every act that is outside the marital union. Why do we do so?

Because we realize that chastity and purity of heart are crucial to our existence. Jesus taught us in the Sermon on the Mount, “Blessed are the pure in heart, for they will see God” (Matthew 5:8). We’re not hating on those that promote homosexuality or just condemning all the horrifying things you just heard about. We’re more equality minded in the sense that we don’t want any kind of impurity corrupting our children, be it homosexual or otherwise.

Saint John Bosco, the wonderful saint who spent his life on earth mentoring young boys and leading them on the way of virtue said, “Holy Purity, the queen of virtues, the angelic virtue, is a jewel so precious that those who possess it become like the angels of God in heaven, even though clothed in mortal flesh.” Indeed, chastity is the queen of virtues, and it’s a virtue we’re all called to imbue if we want to see God and enjoy eternal bliss. Chastity and purity of heart are indeed extremely difficult virtues especially in this world of ours which is so plagues by promiscuity and lust. Our Lady of Fatima warned us that more souls go to hell for sins of the flesh than any other sin. We must take this warning to heart and care not just for our own souls, but also those of our brothers and sisters.

St. Maria Goretti, famed for her purity and chastity, was taught by her mother to kneel devoutly every day and pray three Hail Marys to the Queen of Heaven in honor of her Immaculate Conception. In fact, a few days before her death, finding herself alone, although she had lost all strength and could not stand, she rose, and taken by surprise by a visitor, she was found kneeling, reciting her usual three Hail Marys for purity. I encourage you to begin this devotion to the Immaculata for ourselves and our loved ones, for unless we are pure in heart, we cannot see God.

For LifeSiteNews, this is John-Henry Westen, and may God bless you all.