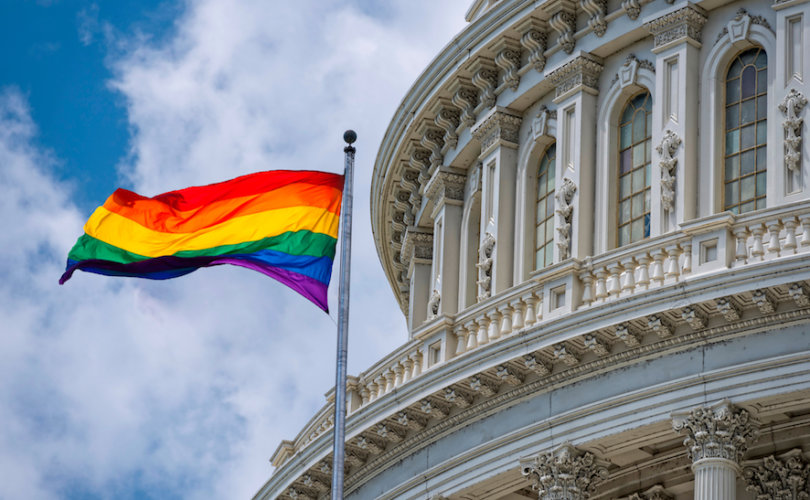 (LifeSiteNews) — The term which describes the successful entrapment and harrowing physical and mental endangerment of vulnerable children and young adults within the web of transgender ideology also now clearly applies to the method used to persuade a large cohort of GOP members of Congress to support the impossible notion of same-sex “marriage”: Grooming.

Last week, The New York Times published a story recounting how twelve Republican Senators were swayed by a group of prominent donors, several of whom identify as gay, to throw their support behind the so-called Respect for Marriage Act (RFMA):

Behind the scenes, a group of influential Republican donors and operatives, including some of the party’s most prominent gay leaders with long experience prodding their party to embrace L.G.B.T.Q. rights, banded together with the bill’s proponents in Congress for a coordinated, $1.7 million campaign to persuade G.O.P. senators that backing it would give them a political edge.

While the people and organizations who worked to persuade these members of Congress that same-sex “marriage” is a “right” which must be protected likely think of themselves as lobbyists, the term “groomer” is more accurate.

The grooming of Republicans has been going on for a very long time, targeting weak, vulnerable GOP politicians who ultimately choose to transition from conservative men to males of ambiguous political and moral character.

Over the last decade I’ve had a front row seat from which I’ve witnessed the moral transitioning of their souls and, in turn, their complicity in transforming the immutable definition of marriage from complementary, conjugal and procreative to genderless and sterile, where sodomy now constitutes marital consummation.

In all cases, a broad spectrum of otherwise normal people who shared what was once a common morality and world-view with the general population, have been groomed to affirm the absurd.

In a sense, you can hardly blame these individuals. After all, nearly all of contemporary society has been groomed into unthinking, unreasoning acceptance of the impossible notion of same-sex “marriage.” And it has happened at lightning speed, a precursor to the rapid spread of the contagion of transgenderism.

They have joined the ranks of every major media outlet, including FoxNews, the vast majority of Fortune 500 companies, and all major sports leagues and teams, who have been easily, happily groomed, with neither complaint nor whimper.

“Grooming” is what is responsible for the quiet rise of LGBT influence in Christian and conservative circles. Resistance to the normalization of homosexuality and same-sex “marriage” within the Republican Party is, essentially, on life support because the groomers have been wildly successful.

In early 2012, as a newly chaste, former “gay” man, I spent a few days in Annapolis meeting with as many of my home-state legislators as I could, hoping to bolster their resolve to oppose a pending same-sex “marriage” bill. It was then that I realized I was David battling a surprise Goliath.

With the Maryland House vote looming, I stood stunned outside a GOP legislator’s door after word got to me that former GOP Vice President Dick Cheney was calling wobbly Republican delegates, seeking their support for the measure. It was a supremely demoralizing moment, but that’s what it was meant to be for those battling to maintain the immutable definition of marriage.

A couple days later, the bill passed by a thin margin with the help of two Republican votes, thanks to the former Republican vice president’s intervention.

Dick Cheney’s interference in sovereign state issues turned what should’ve remained a “very personal” matter for his family into state and, ultimately, national policy. His meddling — his grooming — emboldened and gave cover to progressives seeking to undo the definition not only of marriage, but of family, man, woman, boy, and girl.

But just as bad, it has transitioned men and women from moral conservatives into adolescent Libertarians who attach little or no value to morals.

In 2014 I was in Indiana to testify before the state’s Senate Rules Committee concerning an amendment to protect marriage. In the end, despite a 37 to 13 Republican supermajority, the State Senate voted to postpone the inclusion of a marriage amendment on the ballot until 2016.

Woven throughout their testimony and throughout most every subsequent one was the dire warning that if same-sex “marriage” were not embraced in the Hoosier State, Indiana would suffer a severe case of brain drain, leaving only knuckle draggers behind. It was a laughable straw man argument fabricated by the leftist coalition. But it worked.

I witnessed a master’s class in grooming on that day. In the same way that young people and their parents have been taught to fear that objecting to or rejecting gender transitioning will lead to suicide or self harm, these Republican politicians were made to fear imagined disaster.

In 1989, After the Ball (subtitled, How America will conquer its fear and hatred of Gays in the 90’s), presented a comprehensive plan to establish the normalcy of gay and lesbian lives and to secure broader acceptance and rights.

In retrospect, it could easily be dubbed a “Groomers’ Handbook,” whose suggested tactics brought about the cultural revolution leading to the U.S. Supreme Court’s Obergefell decision, establishing same-sex “marriage” across the land.

In our day, we now have “Gays Against Groomers,” a coalition of gays and lesbians who rightfully oppose the aggressive tactics employed by trans activists ––who gain affirmation–– and the Medical and Big Pharma industries and their professionals ––who reap huge profits and incomes–– by grooming vulnerable young people.

However honorable their commitment against the grooming of kids for transgenderism, these same gays and lesbians fail to recognize that they too have acted as groomers, either actively proselytizing for the normalization of homosexuality and same-sex marriage, or passively doing so by “coming out,” acting as a strange leven in society.