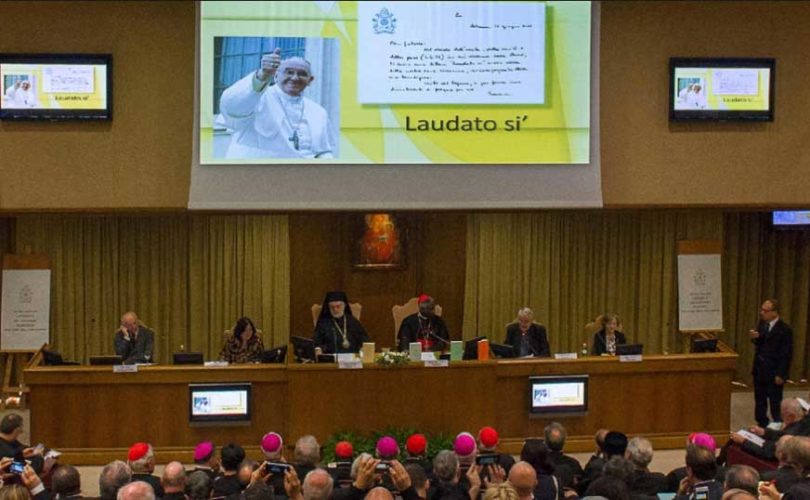 July 2, 2015 (LifeSiteNews) — There is growing alarm over the impact in the secular world of the Papal Encyclical on the environment, Laudato Si', despite the good intent and otherwise many praiseworthy statements in the encyclical, which LifeSite has highlighted.

Anti-Christian secular leaders and institutions are seeing the encyclical, and the upcoming visit of Francis to the United Nations, the US Congress and the Obama White House to promote the encyclical, as the most dramatic coup for their efforts that they could ever have imagined. They realize that, regardless of the original intentions of the encyclical, there are enough wide openings that have been inserted into it about climate change, world government and more by their friends advising the pope, that they can exploit to huge benefit for their schemes.

The extent of the laudatory comments from President Obama, UN leaders, all the liberal mainstream media, almost all leading Catholic dissidents and other of the most prominent world de-population, anti-Christian, socialist and even Marxist leaders, is chilling for those who understand the implications of this extraordinary support for the encyclical.

The alarm is especially felt among pro-life, pro-family leaders who have been successfully working since 1994 at the UN, in response to a special appeal from Pope John Paul II. The pope, who was then deeply concerned, appealed to the world’s pro-life organizations to thwart efforts at the United Nations to advance a host of agendas against life and the family.

Those who have heavily labored since 1994 in this international arena, constantly supported and encouraged by the Holy See delegation to the UN, are dismayed to be witnessing the Holy See now working very closely with some of the very same people they have been heroically fighting all those years. These actions are undermining the extraordinary successes of the last 21 years and ignoring the years of insider knowledge and experience gained about the machinations of the UN and its NGO and other allies to derail Christian civilization.

To help LifeSite readers better understand the gravity of current developments, I include an excerpt below from a detailed paper LifeSite presented to an annual meeting of 55 Mexican Pro-life leaders in Mexico City in September 2011. The presentation, Understanding the Crucial International Dimensions of the War Against Life and Family was intended to instruct these leaders that their local struggles were in fact driven by an internationally coordinated agenda.

I would urge you to read the full paper. It was greatly appreciated by the Mexican leaders. After the conference, a Spanish translated version of the document, along with two other critical Spanish translated documents that we gave all delegates, were passed on by some conference participants to prominent persons in Mexico. This included, I was told, even the then president of Mexico.

This information will provide a helpful context from which to evaluate current developments related to Laudato Si'. Also see my blog post of a few days ago, Astonishing New York Times video: population/ climate panics exposed

Excerpts from Understanding the Crucial International Dimensions of the War Against Life and Family:

PRO-LIFE LOBBYING AT THE UNITED NATIONS BEGINS IN 1994

In 1994, two years prior to the Vatican’s decision on UNICEF (which Pope Francis has reversed), Pope John Paul II became very worried about the involvement of NGOs (non-governmental organizations) at the UN. In many cases these organizations were working for goals at the UN that did not match the goals of their governments. Many were aggressively secular, feminist, pro-abortion, pro-homosexual and socially leftist. The Holy Father sent an unprecedented letter to the bishops’ conferences of the world asking them to encourage pro-life and pro-family groups to become involved at the UN to balance the alarming actions of the NGOs.

Campaign Life Coalition was one of the first of a small handful of organizations to send its first ever delegates directly to United Nations conferences. Nothing like this had ever been done before.

At the first meeting in New York a small coalition, working with the Holy See delegation to the United Nations, was formed. Those in attendance were former Canadian diplomat Gilles Grondin and Louis Dirocco, both representing Campaign Life Coalition, Dan Zeidler Representative in the USA for the Venezuela-based Latin American Alliance for the Family (ALAFA), Christine Vollmer of Venezuela, Jean Head of Manhattan Right to Life, Lawyer Richard Wilkins representing US Mormons, a priest from Australia, Peter Smith from the Society for the Protection of Unborn children from the UK and a few others.

From there, they went on to attend and greatly influence major United Nations conferences in Cairo, Copenhagen, Beijing, Istanbul and Rome. All of these conferences had agendas to implement UN resolutions to advance population control and radical feminist ideology.

We recruited many other pro-life, pro-family delegates to attend the conferences. They became part of a very well-coordinated, spiritually unified and emboldened team to undo the plans of the vastly better funded anti- family NGOs, UN agencies and government delegations. The knowledge we gained and the influence of our delegates on the conferences was astounding.

Time after time we derailed the plans of the other side and shocked them with how effective we were by simply presenting the truth to UN delegates who had never before been exposed to such honest revelations about UN manipulations that were a danger to their cultures.

Some of the more amazing results were achieved when we began to send groups of University age youth to these conferences. This happened in response to Planned Parenthood’s tactic of sending youth delegates to lobby for reproductive health and sexual freedom rights. Of course, these PP youth did not at all represent the views of most of the world’s young people.

The pro-life coalition first sent 17 youth to the August 1998 UN conference in Lisbon, Portugal, five of whom were from Campaign Life Coalition. This small group totally overwhelmed everything that the Planned Parenthood youth attempted to accomplish. The youth from the developing nations saw our youth and saw that they shared what we were looking for – genuine help for women and children – not condoms, abortion and sex education.

The World Summit on Social Development, held in Copenhagen in March 1995 was supposed to offer solutions to poverty, unemployment and social disintegration. Instead, it was hijacked by the population controllers who used every UN forum to perpetuate their over-population myth.

In a CLC training session for youth delegates in 2000, Gilles Grondin explained that many of the de-population efforts spelled out in NSSM 200 parallel the objectives of the international Planned Parenthood Federation and the United Nations fund for Population activities (UNFPA). So here we went round back again to NSSM 200.

The Habitat II conference in Istanbul in 1996 was supposed to be about housing. Instead, even here, delegates were forced to hear talks about reproductive and sexual health, various forms of the family and gender inequality.

As we saw at Beijing +5 and Istanbul and other UN conferences, the population controllers were not just about abortion, but also homosexual rights, contraception, sex education to pervert young minds, pornography, legalized prostitution and now also euthanasia.

You see, our opponents have shown us again and again that all of these issues are connected to their overall de-population, racist eugenics agenda.

And to do this they also have to suppress freedom of religion and conscience, corrupt religious institutions and destroy Christian civilization.

See article by William Oddie of the Catholic Herald: Following St Francis, the Pope teaches concern for nature; but Laudato Si’ will bring no justice for the poor.

For a criticism of the encyclical from a poverty, economic and environmental perspective from the Acton Institute see Laudato Si’: Well Intentioned, Economically Flawed