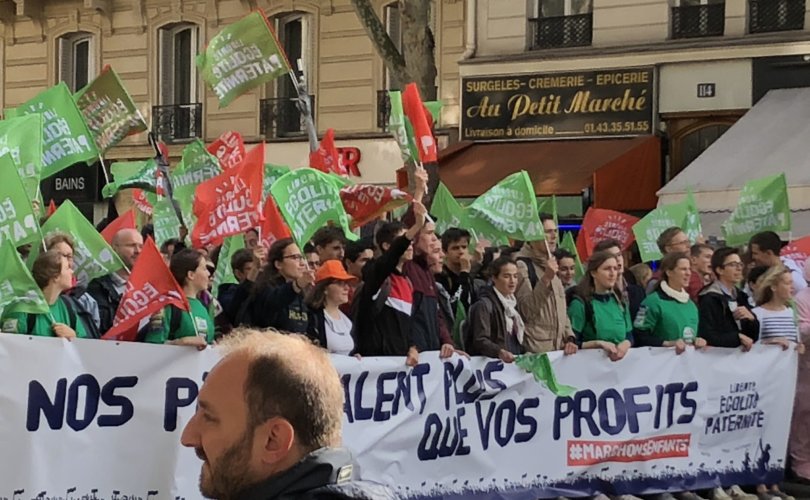 October 8, 2019 (LifeSiteNews) – Some 600,000 people, according to the organizers — but only 74,500, according to the “independent” agency “Occurrence,” which makes no mystery of its ideological proximity with the government of French president Emmanuel Macron — marched Sunday in Paris against the legalization of artificial procreation for alone-standing women and lesbian couples.

The latest edition of the “Manif pour tous,” which saw the light in 2012 with the first French demonstrations against same-sex “marriage,” has done it again.

The police, who must have had their heads elsewhere, only counted 40,000 demonstrators. The truth is that no one expected such a high level of participation in a protest against such a marginal change in bioethics laws (in comparison with the whole corpus of “progressive” legislation governing abortion and procreation in France. Waves and waves of people marched through the narrow streets surrounding the Jardin du Luxembourg and the boulevards that converge to the meeting point fixed by the police near Montparnasse station.

No one was expecting such a turnout: neither with the police prefecture, nor, apparently, the organizers themselves – some 20 associations united with “Manif pour tous,” still going strong. The starting point, Place Edmond-Rostand near the Luxembourg gardens, was soon overflowing, right from the beginning of the march at 1 p.m. Demonstrators continued to flock there until 3 p.m., rightly considering that the relatively short route would ensure that they would not miss the essential. It turned out that the last demonstrators would only leave the starting point after 4.30 p.m.

In many places, the crowd was such that it was impossible to move. The prefecture was forced to open a secondary route to accommodate a good third of the participants while others reached the endpoint of the march by their own means. Next to the old blue and pink flags of the “Manif pour tous” brought by seasoned demonstrators, a sea of new green and red banners bearing the words “Liberty, equality, paternity” billowed in the fresh autumn air.

It was a quiet walk. There were relatively few sound trucks (a relief!) and at one point the organizers requested a minute of silence for the victims of the new reproductive folly: the fathers who will be reduced to a role of “sperm donors” for alone-standing women and lesbian couples who will be fabricating “orphaned” children who will never know their father.

“Liberty, equality, paternity:” this was not the only a discreet reference to a “revolutionary” vocabulary – liberty, equality and fraternity were the demands of the French Revolution of 1789. One of the main slogans of this demonstration for fathers’ rights was “Marchons enfants,” a throwback to the not less revolutionary French national anthem. It can be argued that these references are not in the best of taste, given that the Republic, through the Terreur and many legislative reforms, has already cut off the head of France's “father,” who was the king, and has finally erased from the Civil Code the concept of paternal authority.

But this does not diminish the event’s success. What must be remembered is the ability of the French to mobilize in an attempt to stop one of the worst abuses of the day: the desire to legalize the manufacture of children deliberately deprived of a father, or more precisely, of the right to have a normal family link with the one who will forever and despite everything be their genetic father.

The organizers, who chose not to speak out against artificial procreations and test tube babies as such, did not underscore one of the more appalling aspects of the draft law that aim to remove for one and all the present requirement of medically established infertility in order to have access to in vitro fertilization or artificial insemination under medical supervision. This would open the door to a predictable drift in the more or less short term that would lead “normal” couples to manage their procreation over time through embryo or ovae conservation or to tailor their embryos thanks to a more refined knowledge of the characteristics of human DNA.

But while the slogans and deliberate oversights of the march were criticized by some, it must be said that no other country in the world has been able to put hundreds of thousands of people on the streets to protest against the absurd expansion of medically-assisted reproduction, or in other words, the introduction of the test tube baby market. It is a credit to France.

But one wonders how many of these people voted for Macron in 2017. … His party’s desire to legalize test tube babies for lesbian couples was no secret at the time.

The mobilization was also remarkable in that the first article of the revised bioethics laws had already been adopted last week after shamelessly rigged debates, first by disregarding the conclusions of the general consultation on bioethics, which had clearly rejected artificial procreation for single women and lesbian pairs, and then by the management of speaking time and votes by Richard Ferrand, president of the National Assembly.

On the eve of the march, Paris Archbishop Michel Aupetit denounced the “disdainful, even arrogant attitude” of the authorities in an op-ed. He wrote that it testifies to an “ideological attitude sadly lacking a realistic anthropological foundation.”

“A child is always a gift to be received without making it a manufactured product due to human technology that is subject to the power of money,” he said.

Welcoming the courage of those who oppose the innovations proposed by the law, he said, “No, the law has not been definitively written. A word that is based on the truth of our human condition does not stop at the immediacy of its effect. It is part of the future, when your common conscience will be able to evaluate the most frightening consequences of this, which are of the same order as the one that ecology reveals.”

Demonstrators apparently are under no illusions. From what could be heard during the march, they did not really think – because of the failed experience of the “Manifs pour tous” against same-sex “marriage” – that the presence of hundreds of thousands of people on the Parisian pavement would lead to a change, or better still, to a withdrawal of the law. They had to observe that new abuses are hiding behind the proposed law, as the discussion has already been extended to relaxing the conditions allowing to get around the still illegal practice of surrogate motherhood by going abroad.

But “at least in 20 years' time, my children will not be able to tell me that I preferred to spend my afternoon cozily at home when such serious decisions were being made for the future of society,” said one demonstrator. At least, hundreds of thousands of people will have said no.

The time has not yet come to take stock, since the bill will continue on its parliamentary path – probably not until June 2020, according to the timetable announced by the government – and the Manif pour tous, after having already asked the police prefecture for corrected accounts regarding the participation in Sunday's demonstration, has planned to go into the streets again on Sunday December 1, January 19, March 8, May 17 and June 14.