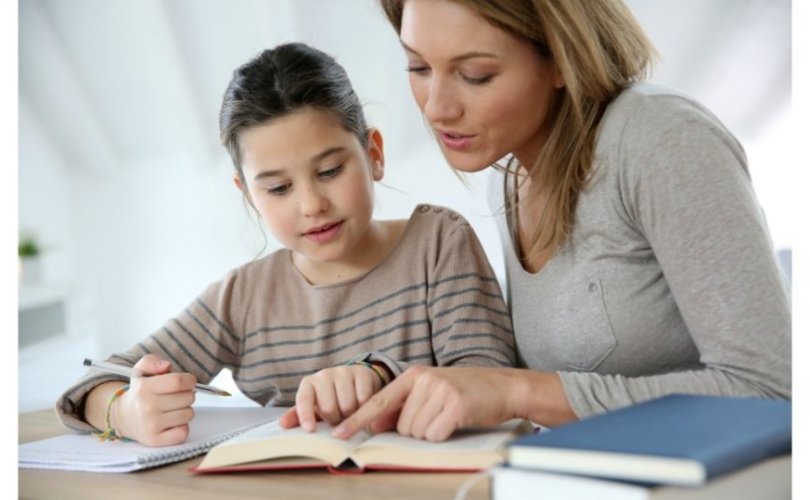 April 20, 2020 (LifeSiteNews) – Harvard Law School appears to be coordinating an attack on home-education. A planned conference appears to be intended as a pile-on by critics of homeschooling. Harvard Magazine has published an approving summary of an 80-page article in the Harvard Law Review by Professor Elizabeth Bartholet about why home-education should be banned. The Harvard Magazine account cites no dissenting or alternative views.

Wags on social media have pointed out that the cartoon accompanying Harvard Magazine’s piece manages to misspell “Arithmetic” (“Arithmatic”). Matthew Peterson (@docMJP) definitely won Twitter with his observation, “If you replace ‘homeschooling’ with ‘attending Harvard’ a lot of the article makes sense.” He illustrated:

“We have an essentially unregulated regime in the area of elite Ed,” @docMJP asserts. All 50 states have laws that make education compulsory, & state constitutions ensure a right to education, “but if you look at the legal regime governing elite colleges, there are very few requirements that professors teach anything of value.” Even apparent requirements such as submitting curricula, or providing evidence that teaching and learning are taking place, he says, aren’t necessarily enforced.

Since the article, like a great deal of elite education, is patently driven by ideological concerns, the point is well made.

What of the underlying academic article? My brief review of it suggests that it suffers from three fundamental flaws.

First, the nature of the evidence. Professor Bartholet is a legal academic not a sociologist, but she should have noticed the discrepancy between two of her own claims which illustrates a wider problem. On p14 she remarks, “Child maltreatment takes place disproportionately in families cut off from the larger community.” On the very next page, however, she notes that it is impossible to get an accurate picture of how much “maltreatment” takes place in home-educating families. If there are no accurate figures, Professor, how can you assert that there is more of it among home-schoolers than in other contexts?

This problem arises again and again. Bartholet complains repeatedly about the lack of information, and then draws extravagant conclusions, and proposes draconian legal changes, on the basis of this inadequate information. Perhaps there should be more studies on home-education, but Bartholet seems determined to justify homeschoolers’ suspicion of hostile researchers which, she complains, hampers this.

The second flaw is the lack of comparison with mainstream education. Meaningful generalizations about home-schooling would calibrate it against the benchmark of schools. Better still, home schooling aiming at a specialist education should be compared to specialist schools, and homeschooling motivated by a concern about academic and behavioral standards should be compared with locally available schools.

It is meaningless to point out that some homeschooling parents only manage to bring their children up to meager standards, if these parents withdrew their children in desperation from a school where outcomes are even worse. Parents tend to be very conscious of their limitations, and many are only driven to home-education by truly terrible experiences of school. It is not so very difficult for home-schooling parents to improve on outcomes such as life-long trauma from bullying, rape, or death, which are far from unknown in state-approved schools.

The third flaw lies in the failure adequately to deal with the enormous range of homeschooling philosophy and practice. Bartholet writes (p22):

In other words, the “unstructured” educational philosophy adopted by some home-educating parents equips children poorly for “standardized tests.” Whatever next?

Personally, I am not a fan of “unstructured” education, the favored approach of the “progressive” (a.k.a. “hippy”) current in home-schooling which Bartholet seems to like more than the book-learning approach ridiculed by the Harvard Magazine’s cartoonist, who depicted a home-educated child imprisoned in a house of books while other children played outside. But to be fair to its proponents, standardized tests are hardly an adequate way of assessing its value. It is precisely not aiming to coax children through those sorts of hoops. By the same token, the study Bartholet refers to clearly shows that home-education which does aim to get children up to speed on conventional educational tasks significantly outperforms schools.

The complexity of the home-education phenomenon clearly demands a nuanced treatment and policy response. If unstructured education is the problem, for example, then it should be discouraged: and the first place to discourage it would be in publicly-funded schools, where its influence is ruining the educational prospects of children despite the protests of parents. If the maltreatment of children is the problem, there are laws against this, and the first place they should be enforced is in schools, where children’s lives are being destroyed despite the protests of their parents. Because, yes, parents tend to have their children’s interests at heart, and often have a better understanding of them than professional educators.

In the meantime, Harvard had better look out: as this Business Insider article points out, home-educated children are storming this bastion of elite education, alongside all the others.