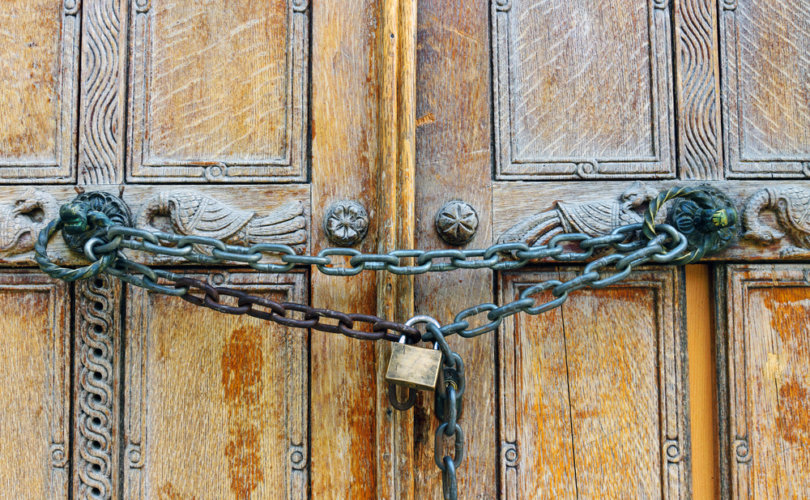 (LifeSiteNews) – In the Post-Vatican II Church of Nice, in the stereotypically friendly country of Canada, it seems the only sin a Catholic can commit is remaining unvaccinated.

While the Canadian House of Commons and Senate were unanimously passing a radical pro-LGBTQ bill that seeks to criminalize sharing biblical teaching and moral guidance about transgenderism and homosexuality, the Church in various parts of Canada seemed more concerned with making sure the faces of the faithful were veiled, and ensuring that every congregant has rolled up his sleeves in the name of science.

“Public Masses are open to the public!” reads the website for St. Basil’s Catholic Parish in Toronto.

“ALL VISITORS MUST BE FULLY VACCINATED AGAINST COVID-19,” it adds directly beneath, seemingly incapable of acknowledging the irony.

The world, of course, has always been at odds with the authentic Catholic faith, and those who seek to uphold it. It is nothing new to face discrimination or persecution for being Catholic. In fact, great Saints and Our Lord Himself have shown us that even having your blood shed in defense of the faith is both an honor and, at times, a necessity.

However, there exists a strange situation in Canada (and almost certainly other countries), where the Church is no longer a place of refuge from the fallen world but a place that turns faithful Catholics into spiritual refugees. The timeless words of Sacred Scripture imploring us to “Be not afraid,” or some variation of that sentiment, has been warped by the Canadian Church into “Wear your mask, get your shot, and social distance—unless you want your grandma to die.”

While the modern Church continues to emphasize the need for dialogue with everyone including apostates and blasphemers, there seem to be only two groups who should be tolerated under no circumstances whatsoever: the unvaccinated Catholics and the Traditional Catholics (many of whom are also unvaccinated).

As Church attendance plummets, the once predominately Christian nation of Canada has various Catholic parishes in Newfoundland and Labrador, and now St. Basil’s in Toronto, publicly telling the faithful that if they do not receive one of the experimental, abortion-tainted COVID-19 injections, well, the Holy Sacrifice of the Mass is just not for them.

Even worse, priests, men who have taken vows of celibacy, who have given up their entire lives to the service of Holy Mother Church, have been told in various jurisdictions, including the Archdiocese of Toronto, that they need to take the shot, or be “subject” to testing, to continue their ministry.

At the start of the pandemic here in Canada, many dioceses, including where I lived at the time, closed churches. Further, and sadly not surprisingly, once reopened, they kept many dictatorial and anti-Catholic measures, such as barring parishioners from receiving communion on the tongue.

I was cognizant of the fact that there was corruption in the Church, and I had varying degrees of faith in the men entrusted to shepherd my soul, but either way, it was depressing to have my suspicions vindicated. Whether intentional or not, the message I received from the Church here in Canada through this cowardice was this: the secular world values the body over the soul, so to avoid political blowback, we do, too.

Politicians who support abortion can receive communion, and are welcomed into the Church with open arms. But if one were to object to benefiting from the murder of an unborn child, not for “life and death” health reasons (look at COVID’s mortality rate), but for the social convenience of being allowed into a restaurant under the new medical apartheid in Canada, well, they can wait in the parking lot.

The Post-Vatican II Church of Nice has heralded ecumenism as the sole dogma of the faith. Every religion is accepted, so-called interfaith dialogue is encouraged, and the Ten Commandments are now the Ten Suggestions.

The easy objection to my point-of-view is that I am prideful, that I am full of self-righteous indignation, but the truth is, without access to the Sacraments, without a courageous clergy to uphold the faith in these trying times, to push back against the diabolical disorientation in the world, I, and many others, are at risk of being damned.