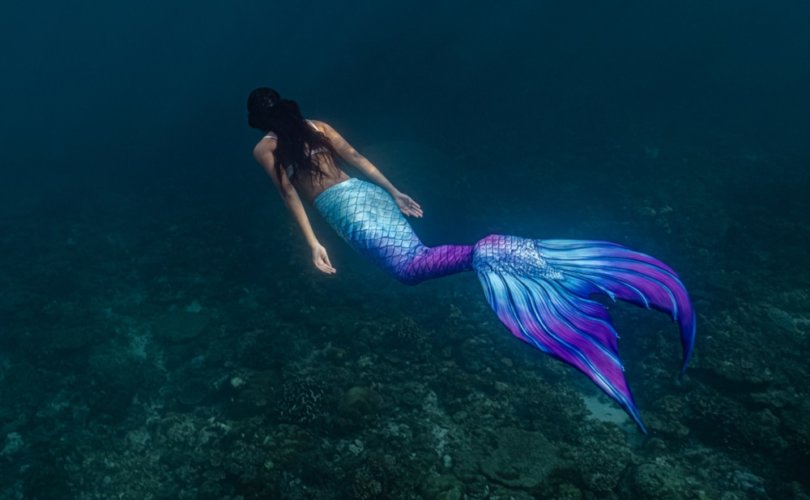 August 26, 2020 (LifeSiteNews) — Let’s imagine you’re playing “make believe” with your three-year-old daughter Sarah. You ask her, “What are you today?” She replies, “I’m a boy and a girl and a mermaid and a king and a queen, all rolled up in one!” You smile and reply, “You’ve got quite an imagination, Sarah!”

Last week, the individual in question, J. Mai, came to national attention when she participated in an LGBTQ panel discussion during the DNC, calling for the abolition of the police, prisons, and ICE.

Care to read that again slowly? Care to try to wrap your mind around this description? And care to consider that Mai is working towards a Masters in Divinity at Wake Forest University School of Divinity?

And remember that Mai, who is probably a caring individual, is counseling some of your kids at college, helping them sort out their own gender and sexuality questions. Perhaps more mermaids will emerge?

Mai is also “a recently licensed minister in the Progressive National Baptist Church.” This underscores the meaning of progressive, as in, “progressing so far that it no longer resembles the faith of Jesus and the Scriptures.” (According to the Church’s Preamble to their Constitution, “The people called Progressive Baptists believe in the principles, tenets and doctrines proclaimed or advocated in the New Testament as sufficient for their polity and practices.” Really?)

As for Mai’s study interests, they “lie at the intersections of blackness, queerness, decolonization, and trauma,” with the end goal being “liberation for all people.”

And all this is meant with the utmost seriousness, as Mai appears to be devoted to her studies and her cause.

The reality, however, is that this is gender madness. Mai is neither nonbinary nor gender transcendent, neither a mermaid nor a Queen-King. Biology can be a very stubborn thing.

And unless Mai is biologically or chromosomally intersex, then Mai is distinctly and consistently either male or female, not neither and not both. As the old saying goes, “And them’s the facts.”

But none of this is surprising in the least. As I’ve been shouting for the last 15 years, once you depart from God’s simple order, you can end up with anything, including nonbinary mermaid royalty. Why not?

Why is this any more extreme than, say, the person whose online bio reads: “just about your average multiracial, pansexual, transracially inseminated queerspawn, genderqueer, transdyke, colonized mestiza, pornographer, activist, writer.” (This goes back to 2008.)

Or why is this any more extreme than the high school boy who preferred not to identify as male or female, instead asking to be called “Tractor”?

There’s a reason the last chapter in A Queer Thing Happened to America, published in 2011, was titled, “GLBT and Beyond: Reflections on Our Current Trajectory.” And there’s a reason that my 2016 book, Outlasting the Gay Revolution, had a chapter calling us to “Celebrate Gender Distinctions.”

I, along with many others, saw where things were going, and we knew we had to the sound the alarm.

You might say, “So what if people think they are tractors or nonbinary mermaid royalty? What’s that got to do with  you?”

First, I’m sure God has something better for them and He didn’t intend for them to assume these identities. They may call me hateful, but I genuinely care.

Second, children in pre-school and kindergarten are getting indoctrinated in this gender madness, as if however you happen to feel at a given time dictates reality.

Third, this has become a major political issue, as reflected in the Democratic National Platform, where the words “God” and “Christian” occur once each while “transgender” occurs 15 times and “LGBTQ” 32 times. (For the record, “God” occurs in the phrase “God-given potential,” while “Christian” occurs in a sentence detailing atrocities committed by ISIS. Note also that “Muslim” occurs 8 times.)

Transgender-related policies can have a direct impact on your daughter’s athletic competitions as well as on your own livelihood. (Just search for “Sasha White” as the most recent example of someone fired for taking issue with trans talking points.)

Fourth, if we don’t speak out, the societal madness will only increase, while the blurring of gender distinctions will turn “reality” into whatever people imagine it to me. (For some vivid examples, see my video, “The Man Who Became a Woman and Then a Dragon.”)

I truly wish the best for Mai and others who identify somewhere in the LGBTQ+ spectrum. At the same time, I understand that, from their perspective, I’m a small-minded, bigoted, self-righteous transphobe. So be it.

I for one cannot sit idly by when educated adults proclaim themselves to be non-binary, gender transcendent mermaid royalty — and others say, “Oh, isn’t that nice!”

Not on my watch.

(See here for my related video.)