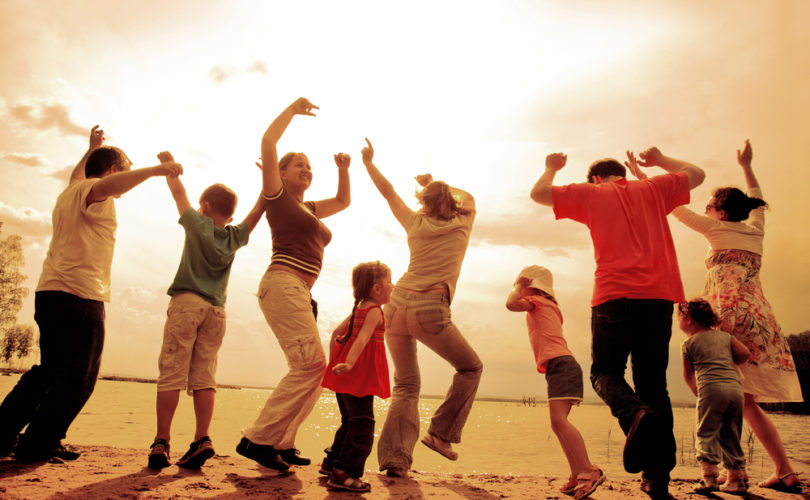 January 29, 2020 (LifeSiteNews) – The basic outlines of the Church’s teaching on family life, in terms of what we must on no account do, are clear, but we need to beware of the more subtle ways our thinking has been warped by our contraceptive culture. This is a hugely complex topic and I want to look at just one aspect of it: the attitude to large families.

It has become a joke, albeit a boring one, that many people can’t see a family of more than three children without having a dig at the parents. My lifestyle does not expose me to much of this but I did get a “You should get a TV” from a stranger recently, which was intended as light-hearted. (Actually, I’d rather have the children.) Such comments can be particularly upsetting when they come from fellow Catholics. No less annoying is the counter-pressure occasionally found in those pockets of Catholic society where larger families are more common. It is such a stupid thing to ask mothers if they are going to have another baby. Who knows what has been going on? Just don’t do it.

These opposing remarks have something in common, which is the odd way they hold parents to account for having or not having children, and see a certain family size as the right one for everyone: whether is it two children, six, or none. This is obviously absurd in ignoring the particular circumstances of different families, above all biological factors which are of no concern to complete strangers. But it also puts an artificial limit to family size, whether the limit small or large.

One motive for this is a concern about the environment, or the supply of food. Without going into too much detail, the Netherlands, one of the richest countries in the world, has a population density of 521 people per square kilometer, and enormous national parks; China has a density of 153. There is no shortage of space, nor, now vertical farming technology has rendered calculations about arable land irrelevant, need there be any shortage of food. It is impossible to escape the impression that some environmentalists just don’t like people very much, and see the coming demographic winter in developed countries, and the projected decline of the world’s population, as a cause for rejoicing.

(Here’s a fun fact. When will or did the world population growth rate begin to slow? 1968.)

A more pervasive motive, however, is the question of “what I (or you) can cope with”. Not, you understand, a concern about health problems for the mother or actual malnutrition among the children: I mean, in relation to what we might call lifestyle expectations.

People who have never experienced a large family often assume that they must be proportionately more chaotic than a smaller family. ‘It is must be mayhem at your house at Christmas!’, my butcher cheerily informed me, no doubt based on an experience of two or three children extrapolated to six or eight. Obviously, things don’t work like that. Large families have their challenges, but the biggest challenge is keeping the mayhem under some kind of control with just one child.

The same goes for estimates of the cost of “raising a child”. This page, based on US government figures, talks about the enormous cost of one child, and makes no reference to the marginal cost of additional children. The implication is that readers should double the cost of one child if they are considering two, and to quadruple it for four, which would be an obvious mathematical fallacy. Indeed, it is silly to invite people to consider if they can afford the average cost of a child. This average is composed of super-wealthy parents going to all sorts of non-essential expenses with their children, and the rest of us not doing so. What has the average cost got to do with what it will cost you, if you are relatively poor? No-one is going to force you to buy every child an iPad.

I would like to invite young people starting or considering a family to set aside not only this kind of demonstrable nonsense, but also the more realistic worry about maintaining the expectations associated with small families, such as children not having to share a bedroom. Similarly, in large families there tends to be more wearing of cast-off clothes, and flying with the whole brood can become very expensive (no sibling discount there). There are many things which need to be adjusted, gradually, as the head-count increases. There may be typical middle-class things you could do if you have only two children and can’t do if you have six. There’s no denying it, and having a large family in this sense is a real sacrifice. You know, however, exactly what you are getting instead. Children.

St Augustine wrote that Christian mothers, as well as consecrated virgins, should be praised, because they bear children for the Church (De Virginitate). This is the end, the goal, of the vocation of marriage. Don’t place too many limits on God’s generosity.