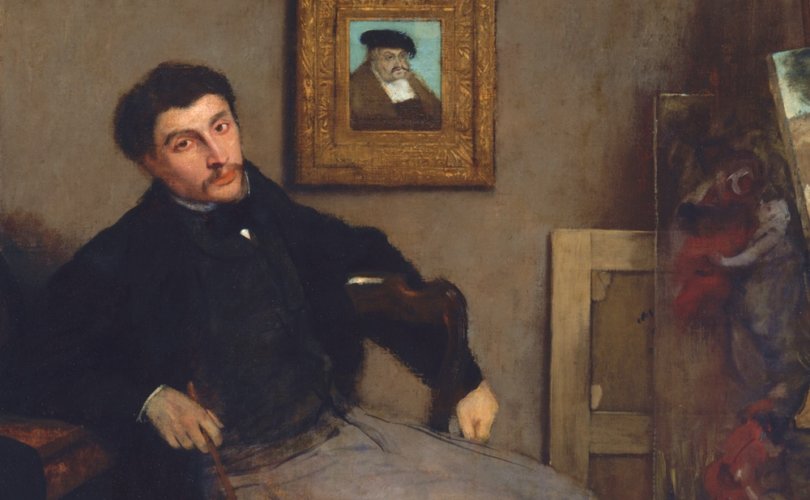 October 23, 2018 (LifeSiteNews) – Jacques Joseph Tissot (1836–1902), known in English circles as James Tissot, was among the finest portrait painters of high society in Paris and then in London for the first decades of his career. His bright, fresh, sympathetic, and slightly coquettish depictions of beautifully-clad ladies were famous and much sought-after. He was making quite a prosperous career off of this sort of thing and could have readily continued with it till his old age, had he not experienced a strong renewal in his Catholic faith in 1885, which prompted a complete about-face in the subject matter of his work.

From this time onwards, he painted almost exclusively biblical scenes, lavishing keen attention and a fertile creative imagination on his scenes and figures. He traveled to the Holy Land in 1886, 1889, and 1896 to make extensive landscape and figure studies, as he wanted his depictions to be as exact and authentic as he could make them. In particular, he sketched native people over and over, so that his work would carry the force of conviction. Most of all, he painstakingly narrated the story of Christ in 350 gouache (opaque watercolor) illustrations, many of which have become justly famous and widely reproduced.

The Brooklyn Museum acquired the entire set of Tissot New Testament paintings in 1900. Although the museum still owns the works, unfortunately they seldom put them on display. In 2009–2010, 124 out of 350 were exhibited, bringing Tissot’s work to public view for the first time in twenty years. It baffles me why these would not be part of a regular ongoing display, unless the artworks themselves have been deemed too fragile by their curators. Angelico Press has happily included all of Tissot’s biblical scenes (in black and white) in their deluxe, three-volume, large-format edition of the visions of Blessed Anne Catherine Emmerich.

Today we will look at two of Tissot’s scenes that I have always found particularly moving: “Jesus Goes Up Alone onto a Mountain to Pray” (below), and “The Communion of the Apostles” (at the top).

As we know from the Gospels, Our Lord would slip away at night to seek solitude and to enter into “the prayer of God” (as we read in Luke 6:12, often weakened in translation to “prayer to God,” which doesn’t quite capture the beauty of the Greek). Here, the Son of God is strikingly depicted in His white garments against a cobalt sky dotted with the stars that He called into being as His silent attendants, and the crescent moon that stands tilted in homage towards Him. An unearthly light seems to come from within His very being as He stands at the summit of reality, the sovereign of creation, the link between heaven and earth, the one in whom all things are bound together.

The mounting steps of solid rock subtly tell us of the fixed and narrow pathway to life that culminates in the vision of God. They tell us that He is at once the Way and the Life, and that neither the path nor the goal will ever disappear: the one is God’s rock-solid creation, the other is the Rock Himself. Here is the Authority, the Teacher, the High Priest, the Lover of souls, who ever intercedes in the presence of the Father on behalf of sinful humanity. When we gaze upon this mystery of light made flesh, we know that no one and nothing can conquer Him, no one and nothing can separate us from His love, which is vaster than the cosmos. He lays down His life and takes it up again, of His own free will; He rescues us and takes us up with Himself, of His own mercy.

“The Communion of the Apostles” exemplifies Tissot’s combination of historical atmosphere and Catholic sensibility. The Upper Room is a slightly fanciful but nevertheless convincing evocation of a Middle-Eastern hall, in which the Apostles are dressed in Jewish clothing that subtly suggests liturgical or monastic vestments. Our Lord distributes His precious Body to disciples kneeling with adoring love and hands clasped in humility. St. Peter and St. John serve as deacon and subdeacon, holding aside Christ’s outer garment to allow His arms free motion—even as one might see today, in a traditional Latin Solemn High Mass, acolytes holding aside a cope to allow for aspersion with holy water, or assistants holding a chasuble to faciliate incensing or the elevation of the Host. In a marvelously subtle way, Tissot is showing the continuity between the Last Supper as the first Holy Sacrifice of the Mass (with the Apostles’ First Holy Communion!) and the Catholic Church’s continual practice in obedience to her Lord’s command: “Do this in memory of Me.”

Another subtle reminder of the liturgical connection to the present is that Tissot has the Lord and His ministers dressed in white, which is the color for Maundy Thursday Mass. In an interesting twist, Tissot shows some of the Apostles with heads covered, while others have heads bared. In other words, some are following the Jewish custom, whereby men at prayer cover their heads, while others are following the eventual Christian custom (spoken of already by St. Paul) of doing the opposite. The Fathers of the Church, in fact, maintained that during the life of Christ and the Apostles, a certain coexistence of Jewish and Christian customs was permissible, but that later it had to be avoided.

Lastly, we might note how the chalice is placed at the head of the table, in a slightly elevated position, directly beneath the hands of the Lord, and sitting on a white cloth (precursor to a corporal). In this poignant scene of the priestly hands that would soon be nailed to the Cross, anticipating the bloody sacrifice of Himself in the unbloody sacrament of the altar, we see the immense tender love of the Lord Jesus for His Church, which He will feed with no less a food than Himself, the one and only eternal nourishment of man.