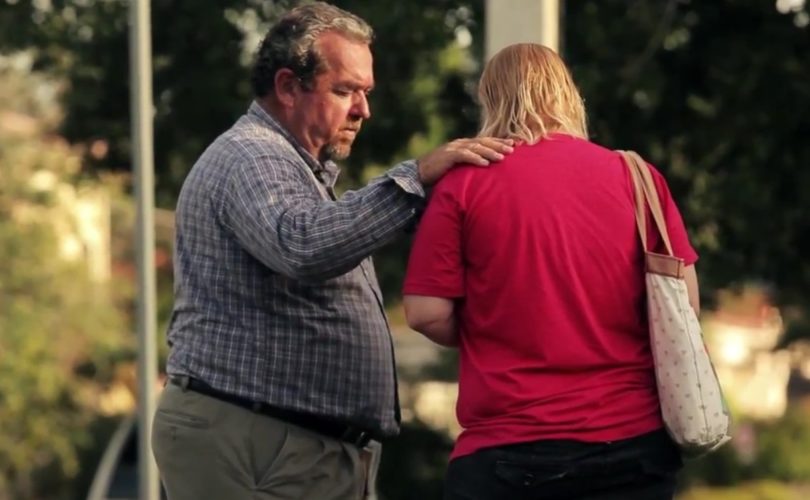 Of the many pro-life heroes I’ve had the privilege of meeting, one man always stands out to me for sheer humility and relentless dedication. His name is John Barros, and for ten years, he’s been standing out in front of an abortion clinic in Orlando, Florida, calling out to the women and girls going through the doors, begging them to change their minds, begging them not to abort their babies. Hundreds have listened to him.

I was with a team of volunteers, debating students in front of a pro-life display on campus at the University of Central Florida. John Barros dropped by our display, and we decided that the day before we left Florida we’d join John outside the abortion clinic.

I’ve been outside an abortion clinic all day—the Morgentaler Clinic in Edmonton—so I thought I had a pretty good idea of what I was in for. But being in front of the Morgentaler clinic was a combination of depression and anger, because there was nothing we could do. We couldn’t even call out, because the cops were there waiting to arrest us if we did. Watching girl after girl walk into the clinic with their Ken Doll husbands and boyfriends was brutal.

At the Orlando Women’s Centre, John Barros was waiting with a few Bible College students. He was thrilled to see us, which I thought was kind of confusing. We’ve never done sidewalk counselling before, and don’t really know what we’re doing. But young people spending time in front of the abortion clinic just made him so happy that I had to smile.

Any smiling was pretty short-lived. The girls started showing up, some of them visibly pregnant. Many of them had been here yesterday and had their baby injected with poison. The late-term procedures usually take at least two days. In ten years, John tells us, only two girls have taken him up on his offer to go to the hospital to get the process reversed. It’s these procedures that are the worst, because the doctor often has to try different things to speed up labor. That way the girls can deliver the dead baby, give him his money, and be on their way.

“You have no idea what kind of demons live in this place,” he told us. “Sometimes the doctor has rap pounding out in the parking lot, and has the pregnant girls marching around to make labor go faster. Get those knees up! Faster! It’s evil. It’s awful.”

A few girls leave the clinic to walk around and speed up labor. It’s brutal to see. One girl starts tearing up a bit, but keeps her composure for the most part. Others walk past quickly, heads down. My friend Alex is biting his lip. Occasionally as one girl marches past, trying desperately to ignore everyone, the scene swims for a bit. Blinking helps.

The stream of girls coming slows a bit, which is a bit of a relief. Then another car pulls up. “They keep coming!” John says, lurching to his feet with some pamphlets. They keep coming. That statement rang through my head for the rest of the day.

With each girl that shows up, John starts calling out and begging. Don’t do this. What do you need? We can give you any help you need. Medical care. A place to stay. Mom, protect your daughter. Don’t do this. Be a real friend. This doctor destroyed a girl just this week. Use your smartphone, Google “Orlando clinic reopens.” He’s wrecking girls in there. Don’t kill your baby.

I wonder how he does it. As each woman begins approaching the clinic, you start praying hard. And as they pass each pro-lifer and enter the clinic anyway, your heart hits the bottom of your stomach with a sick feeling and you blink a few times. Only six inches of brick and drywall separating you from the unspeakable carnage we’ve been showing people all week.

John points to one of the parked cars. “See that? This is why I’m so happy you’re here. This is why we need you changing minds on abortion.” I didn’t see what he was talking at first, so he pointed closer. It was a bumper sticker. UCF. University of Central Florida. John nodded. “We need you there [at the university] so they don’t end up here.” It was a sobering thought. I guess we must have missed them.

When the stream of people heading for what John calls the “house of madness” slows, he gets his bullhorn to preach. He knows from experience that they can hear every single word he says in the waiting room and in the operating group. And dozens of women and girls have left the clinic after listening to his words, in tears and no longer willing to kill their babies.

Don’t make yourself guilty of this. I’m here to help. I’ll give you anything you need. I’ve driven girls to safe houses in Tennessee, so if it’s a boyfriend that’s the problem, I can help. Guys, be a real man. Protect her. Please, come out.

No one comes out. It’s time to sing, John tells us. That helps sometimes.

He gets out some hymnals.  We cluster together with the two seminarians, stand out in front of the clinic and begin to sing. Abide With Me. Come Thou Fount. Crown Him With Many Crowns. A hugely pregnant girl in a red jumpsuit walks by and into the clinic. We start singing again. Amazing Grace. A few minutes later, and the door opens. She comes back out. John meets her at the curb and talks to her and a fellow in the van that pulls up. The van pulls away a few moments later, and the couple are waving all the way down the street.

“It was the singing!” John tells us. “Praise God, she’s keeping her baby! Seven months along, changed her mind, they’re so happy, did you see that? Look they’re still wavin’!” He laughs, and it’s gruff, but it sounds light and bubbly. There are hugs and warm looks and hurting, teary smiles. John turns to me.

“Isn’t it amazing what God will do if you just show up?”

If we just show up. Isn’t that the truth?

I’m so, so tired. I had no idea that the clinic was going to drain me that much. But it really did. I don’t know how John shows up, day in, day out. But he does. And God has used him to save hundreds of babies already. And when I asked him why he joined the pro-life movement, he replied, “God didn’t call me to the pro-life movement. God called me to forty feet of sidewalk, and I haven’t left since.”

A servant serving the least of these, and an example to all of us.