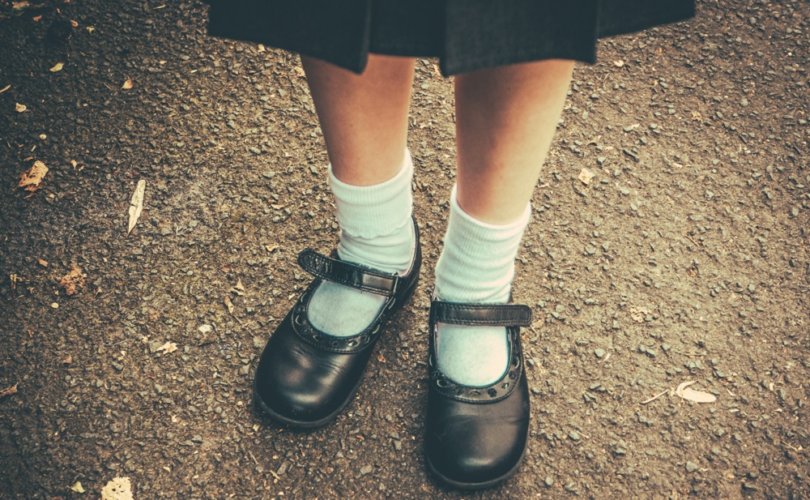 The boy’s mother, Jeneen Schofield, said her young son “sensed” he should be living as a girl while still a toddler.

Beginning at just three years of age, her son reportedly kept making the same Christmas and birthday wish: “I want to be a girl,” according to The Mirror.

The boy’s mom now refers to him as a girl, using the pronouns “she” and “her,” as does the U.K. Mirror. The report continues:

And last year, at the age of seven, her wish came true when her name was officially changed by deed poll — to Luna.

She started wearing a skirt to school and got a new passport too as one of Britain’s youngest transgender children.

Today her proud mum opens her heart on the life-changing events and defies critics who believe her decision to let Luna choose her gender was premature.

NHS worker Jeneen, 37, tells of the moment Luna, now eight, was “set free” and talks of her “grieving process” as she let her little boy go.

The mum says: “Luna was asking when she could be a girl soon after her third birthday. I brushed it off as a phase and told her to stop being silly.

“But she kept asking. My family felt she was too young to make the decision to be a girl, but I didn’t want to tell her how she felt and knew this wasn’t going away.”

This “trans toddler’s” story is part of an alarming trend in England.

In the last year, the number of children exhibiting gender dysphoria has doubled, and over 2,500 kids were referred to the nation’s sole — now overwhelemed — gender identity “clinic” serving “transgender” and “non-binary” youth.

Although Schofield insists that she never encouraged her little boy to be a girl, in 2016, she took her five-year-old son to a local “Pride” event where they came in contact with “Mermaids,” an organization that supports transgender children, teens, and families.

U.K. National Health Service (NHS) psychologists have said children are now being allowed to live as the opposite sex too soon, according to The Mirror:

Letting kids as young as six “socially transition” could do long-term harm by forcing them to choose too early.

Social psychologist Dr David Canter said: “No one should be assigned the label transgender before puberty. If the child is unhappy then the reasons should be explored without assigning labels.”

Consultant psychiatrist and TV doc Raj Persaud added: “A careful medical assessment is needed to understand what is going on. Only then can decisions be reached.”

As part of his “social transitioning,” Schofield said her son was “re-baptized” last year.

“The vicar couldn’t have been more supportive, even wearing a rainbow silk scarf,” said Schofield.

While the Church of England doesn’t officially offer “second baptisms,” priests have been  directed to offer baptism-style ceremonies for those announcing their new sexual identity.

In a pastoral guidance issued last year, clergy were told to call men by their new female names and women by their new male names. The guidance declares, “For a trans person to be addressed liturgically by the minister for the first time by their chosen name may be a powerful moment in the service.”

Christian Concern’s chief executive, Andrea Minichiello Williams, a lay member of the Church’s General Synod, criticized the new guidance at the time, saying it is a continuation of the denomination’s “devastating trajectory towards an outright denial of God and his word.”

It is not loving to mislead people — and wider society — into the falsehoods and myths of transgender ideology,” said Williams.

Trans treatments for children amount to experimentation on kids

Earlier this year, five former Tavistock clinicians alleged that the clinic had been approving “life-changing medical intervention” for children and teens “without sufficient evidence of its long-term effects.”

The former employees also said they believe that transgender charities like Mermaids do damage by “allegedly promoting transition as a cure-all solution for confused adolescents.”

“Given [the] paucity of evidence, the off-label use of drugs (i.e. what they are approved for) in gender dysphoria treatment largely means an unregulated live experiment on children,” said Carl Heneghan of the Centre of Evidence-Based Medicine at Oxford University in an interview with The Times of London.

Teenage girls in particular are at risk of being referred to the GIDS. The NHS reported that in the 2017/2018 year, more than half (1,806) were for females (or, in NHS-speak, “young people assigned female at birth [AFAB]”). Males numbered 713.

“The next change won’t be for a few years when Luna starts puberty and she can choose for herself if she wants hormone blockers and medication, and whatever else she chooses,” Schofield told the Mirror. “But it will be her decision, and hers only.”

Dr. Michelle Cretella, president of the American College of Pediatricians, has said it is child abuse to foster gender confusion in children by helping them “transition” to appear as the opposite sex.