The social media site called a crucifix 'excessively violent' in denying an ad from a Catholic university.

Update April 6: A Facebook spokesperson has apologized to the Franciscan University of Steubenville for blocking its ad displaying the San Damiano Cross, saying “sometimes we make mistakes.”

“This image does not violate our ad policies,” read the statement issued Wednesday.  “We apologize for the error and have already let the advertiser know we approved their ad.”

Tom Crowe, Steubenville’s web communications director, told Fox News, "It may have been the algorithm or a low level staffer who has something against Christianity.”

“For whatever reason,” said Crowe, “Facebook rejected the cross.”

STEUBENVILLE, Ohio, April 3, 2018 (LifeSiteNews) – Facebook rejected a Holy Week ad placed by a Catholic university featuring a picture of the San Damiano Cross because of its “shocking, sensational, or excessively violent content.”

The Franciscan University of Steubenville, Ohio, responded with an inspired tweet:

An ad we placed was rejected by Facebook today for content that is “shocking, sensational, and excessively violent.”

The ad, intended to promote the university’s online theology, catechetics, and evangelization programs, has instead served to draw attention to the increasingly contentious –– often suppressive –– relationship between tech giants like Facebook that dominate the internet, and Christianity.

Here is the notification to the university from Facebook: 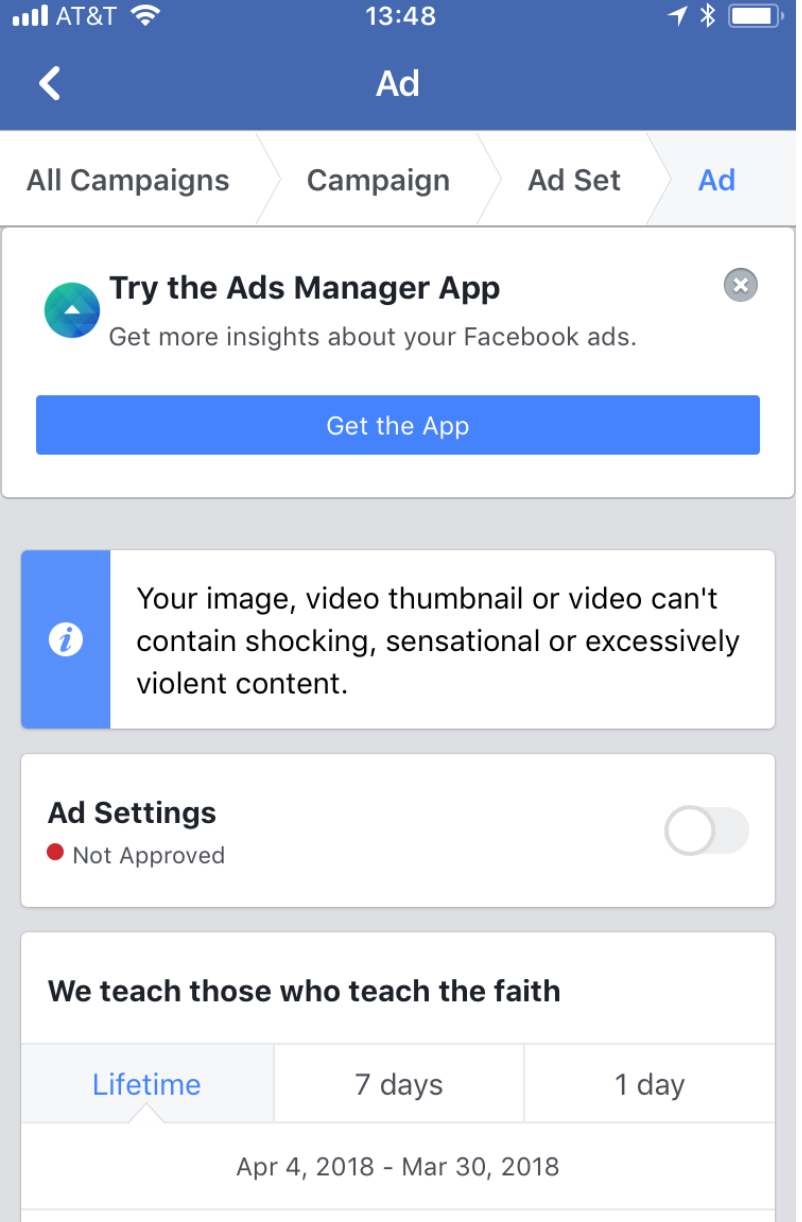 And here is the image that offended Facebook censors––a partial picture of the San Damiano Cross–– known to Catholics around the world as the Cross of St. Francis: 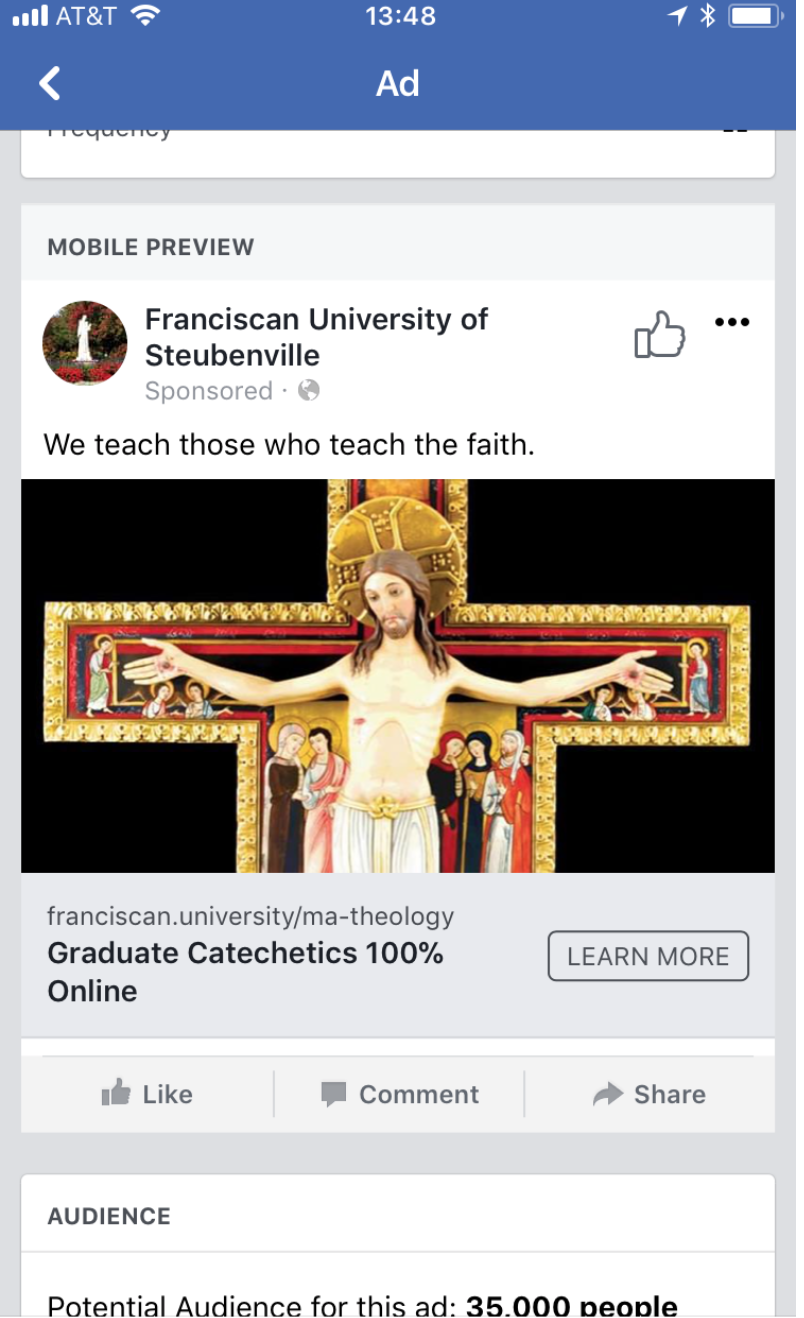 The University commented on the incident on its faculty blog:

The San Damiano Cross. Jesus in glory, reigning from his cruciform throne. This is what the monitors at Facebook consider excessively violent, sensational, and shocking.

And indeed, the Crucifixion of Christ was all of those things. It was the most sensational action in history: man executed his God.

It was shocking, yes: God deigned to take on flesh and was “obedient unto death, even death on a cross.” (Philippians 2:8)

And it was certainly excessively violent: a man scourged to within an inch of his life, nailed naked to a cross and left to die, all the hate of all the sin in the world poured out its wrath upon his humanity.

“But we preach Christ crucified, a stumbling block to Jews, an absurdity to Gentiles. But to those who are called, both Jew and Gentile, Christ the power of God and the wisdom of God.” (1 Corinthians 1:23-24)

As Father Mike Schmitz points out in today’s #ShareJesus message, it was not the nails that held Jesus to the cross: he was God, he could have descended from the Cross at any moment. No, it was love that kept him there. Love for you and for me, that we might not be eternally condemned for our sins but might have life eternal with him and his Father in heaven.

This is sensational, this is shocking. This is only possible because of the excessive violence that he endured for us.

“He was despised and rejected of men.” It was ever thus and will ever be, for those who do not see with the eyes of faith, and love with a love unquenchable.

The Facebook-banned San Damiano Cross, while perhaps foreign and jarring to Facebook censors, is an iconic image well-known and venerated by hundreds of millions of Catholics around the world for close to a thousand years.

Censoring Christian messaging is nothing new among social media and tech giants, and in fact, the tyrannical suppression of Christianity’s presence on Facebook may well be growing.

When Facebook adjusted its algorithms earlier this year in order to ensure the promotion and dissemination of what it deems “quality news,” websites purveying “conservative”  news — including LifeSiteNews — noticed a precipitous drop in traffic and reach.

Last year, Facebook blocked a traditional marriage campaign page. Sky News reported, “This is bullying. Respectful debate is being shut down; Facebook has taken sides (in the same-sex ‘marriage’ debate).”

Facebook also blocked or removed more than two dozen pages belonging to conservative Catholic organizations and individuals, affecting many millions of devoted followers of those pages. While the pages were eventually restored, Fox News’ Todd Starnes, author and host of Fox News & Commentary, said, “You might recall that Facebook has a dark history of blocking conservative and Christian pages.”