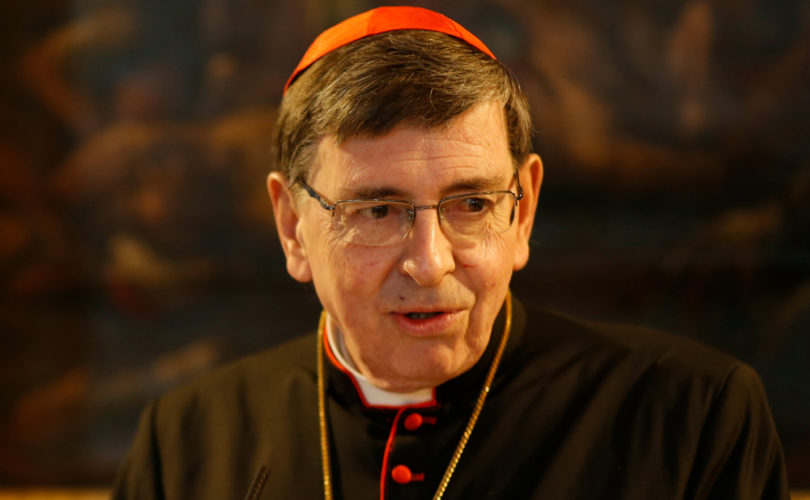 (LifeSiteNews) — In a September 29 interview with the German Catholic weekly Die Tagespost, Cardinal Kurt Koch provoked anger among German Catholic progressivists after he drew comparison between the German Synodal Path and certain Protestant groups during the time of National Socialism, since both of them were trying to adapt their faith to the zeitgeist of their era.

The head of the German bishops, Georg Bätzing, showed himself indignant, making a statement within hours of publication of Koch’s interview, threatening to complain to Pope Francis should Koch not issue an apology.

Koch has since apologized for any hurt feelings he may have caused, but has not retracted his statement.

The cause of this irritation in Germany is a lengthy and thoughtful interview with Cardinal Koch conducted by German journalist Martin Lohmann, who reflected with Koch about the topic of the “dictatorship of relativism” as it had once been called by Pope Benedict XVI himself. The Swiss Koch is, since 2010, the president of the Pontifical Council for the Promotion of Christian Unity. He was made a cardinal by Benedict in 2010.

In this reflective conversation with Lohmann, Koch showed his regret that the German Synodal Path is now opening up to the idea that there are new sources of revelation – that is, the spirit of the time, new scientific insights into human sexuality, and so forth – that actually should incite the Church to change her long-standing teachings on such matters as homosexuality.

LifeSite had reported on the recent September 8-10 fourth assembly of the German Synodal Path which called upon the pope to change the Church’s teaching on homosexuality and also regarding female ordination. This recent assembly’s decisions prompted Cardinal Walter Brandmüller to speak of “mass apostasy from Holy Scripture and Tradition.”

In a similar vein, Koch showed in this new interview with Die Tagespost great concern. “It irritates me,” he stated, “that besides the sources Revelation – Holy Scripture and Tradition – new sources are still being accepted; and it frightens me that this happens – again – in Germany.”

Here, the 72-year-old cardinal made the reference to the time of National Socialism in Germany:

For this phenomenon has already occurred during the National Socialist dictatorship, when the so-called ‘German Christians’ saw God’s new revelation in blood and soil and in the rise of Hitler. The Confessing Church protested against this with its Barmer Theological Declaration in 1934, the first thesis of which reads, ‘We reject the false doctrine as if the church could and must recognize as the source of preaching, apart from and in addition to this one Word of God, other events and powers, figures and truths as God’s Revelation.’

That is to say, in both cases – the German Synodal discussions and the ideas of some Christian groups under Hitler – the attempt exists to adapt the Christian teaching to the zeitgeist of the time.

Koch insisted that the Church is “certainly obliged to take careful note of the signs of the times and to take them seriously. But they are not new sources of Revelation.”

And even earlier in the interview, Koch discussed with Lohmann the concept of the “dictatorship of relativism” as proposed by Pope Benedict.

Here, the cardinal stated that “this dictatorship is also widespread today. For it is one of the basic assumptions of the zeitgeist that claims to truth are immediately equated with indoctrination and intolerance, with fundamentalism and fanaticism.” But this intolerant zeitgeist, as he explains it, can only win when not being opposed. “Like all dictatorships,” Koch went on to say, “one supports the dictatorship of relativism by agreeing with it – loudly or silently. But one must question and expose it.”

Which is exactly what he has now done with the German Synodal Path.

Further analyzing the dictatorship of relativism, the curial cardinal expounded:

For this dictatorship denies truth, but claims it for itself. The paradox of this dictatorship is that it relativizes truth, but makes its own relativism absolute. In this way it shows its true face, which basically consists not in the denial but in the subjectivization and pluralization of truth in the sense that everyone has his own ‘truth.’ Basically, however, there is then no longer any truth, but merely different views and opinions, which people must tolerate mutually in order to be able to live together at all. Truth, however, which does not apply to all people and is therefore not universal, does not deserve this name.

Such a relativistic view, however, is not compatible with Our Lord’s words, who said that “I am the Way, and the Truth, and the Life.”

It is interesting that the German bishops – who are currently having their fall assembly in Fulda, Germany – now seem to be so indignant about Koch’s comparison with the time of Hitler. For, it is not the first time that he has made this comparison.

In 2015, LifeSite reported how Koch had opposed the leading German bishops – especially Cardinal Reinhard Marx and Bishop Franz-Josef Bode, both delegates at the then-upcoming Synod on the Family – for arguing that the Church has to listen to the “life realities of Catholics today, and liberalize her attitude toward remarried divorcees.”

Here, Koch stated Bode’s words should remind us of a similar historical situation: namely the time of the Third Reich, where the “German Christians” adjusted their faith to the worldview of National Socialism, namely its racist and nationalistic ideas.

Koch then said: “Let us think of the ‘German Christians’ during the time of National Socialism, when, next to the Holy Scripture, they also raised up the Nation and the Race as sources of Revelation, against which the Theological Declaration of Barmen (1934) [which rejected the submission of the Protestant churches under the state] protested. We have to differentiate very carefully here and listen with sensitivity to the signs of the times – and to the spirit that reveals itself in these signs: Which ones are signs of the Gospel, which ones are not?”

Koch is also not the only cardinal to make a comparison with conditions of the National Socialist dictatorship. Cardinal Gerhard Müller, in comments given to LifeSite in February of 2020, strongly criticized the first official assembly of the German bishops’ Synodal Path comparing it with the Enabling Act of the German National Socialists in 1933 and saying that it “rescinds the Constitution of the Church of Divine Right,” thereby turning away from the Church’s “religious mission.”