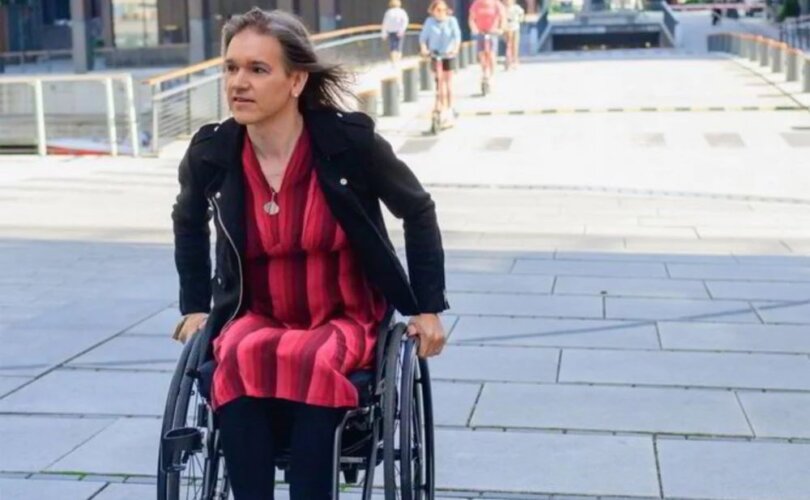 (LifeSiteNews) – When transgenderism began to go mainstream, many conservative commentators began to ask reasonable questions. If a man could become a woman and a woman could become a man simply by saying so — by self-identifying as what they felt they were or what they would like to be — then how could this not apply more broadly? Could someone, for example, decide to identify as black even if they were white? Could they be “trans-species” and announce that they were actually something other than human? How far would society have to go in universally affirming the weird self-actualization exercise of the deluded and trendy?

These questions were dismissed as stupid and — worse! — disrespectful to the legitimate struggles and lived experiences of transgender people. Despite those who pointed out that if the biological boundaries of sex could be traversed at will there was no reason to assume that any other category would hold once the question of who we are was a question of how we feel, the elites embraced the idea that the Binary Was Bad. Occasional disconcerting examples of how these premises could be applied in other situations — like the case of Rachel Dolezal, the white woman who identified as black for years — were dismissed as crackpot oddities.

— Article continues below Petition —
The Quebec College of Physicians must not be allowed murder infants
Show Petition Text
4321 have signed the petition.
Let's get to 5000!
Thank you for signing this petition!
Add your signature:
Show Petition Text

But that, as they say, was then, and this is now. The premises of gender ideology having been adopted, it is slowly but surely becoming more common for people to identify as different races, as animals, aliens, or made-up creatures. And the “transabled” movement — which I first wrote about in this space back in 2015 — is beginning to attract attention. This movement is made up of people who feel themselves to be disabled but are in fact physically healthy. Many of them wish to have a limb removed or to be otherwise mutilated so that their appearance and ability will match how they “feel”; a medical community which has embraced the practice of cutting off penises and surgically removing healthy breasts for the gender dysphoric doesn’t have any compelling grounds to refuse.

One recent viral example of this is an October 28 interview on Good Morning Norway with a robust 53-year-old Norwegian male named Jørund Viktoria Alme, who now identifies as a disabled woman because, he told the interviewer, he has always wished he was born a woman who was paralyzed from the waist down. Almes, who works as a senior credit analyst in Oslo, first announced that he was transabled in 2020, and has received predictably sympathetic coverage from the mainstream media while being excoriated on social media. He has occasionally given interviews alongside his wife Agnes, who hasn’t detailed how she feels about her husband’s category switch presumably morphing her into a lesbian.

Almes’ story really is the sort of thing that, if pitched to a Hollywood producer, would probably be rejected as too far-fetched. He is perfectly healthy, but is in a wheelchair “almost all of the time.” His identification, he says, is a combination of his gender dysphoria (leading him to claim he is a woman) and Body Integrity Disorder, which leads him to see himself as disabled. Disinterested observers will note that he is neither a woman nor is he disabled. Almes’ own description of his condition concedes as much: “It is a cognitive dissonance: in the same way that I experience being a woman in a man’s body, I experience that I should have been paralyzed from the waist down. This is not a desire to be a burden on society. It is about the wheelchair being an aid for me to function in everyday life, both privately and at work.”

Understandably, people who have actual disabilities have been less than pleased by Almes and his media interviews, with a number of actual women with actual disabilities noting that he is a “person with functional legs who chooses to sit in a wheelchair” and that his charade was a perpetual insult to the disabled community. The TV station that hosted the interview attempted to defend themselves by saying that Alme (who they obediently referred to by female pronouns) had a “deep feeling that certain body parts or body functions feel foreign,” but that their search for “independent professionals to explain what BID is” had “so far been unsuccessful.” Almes responded by stating that his public airing of his delusions are for the purpose of facilitating “diversity and inclusion.” But as Reduxx highlighted in their own coverage, Almes’ performance has a weird aspect to it:

In September, Alme confessed to iNyheter that his identity as a disabled woman was sexually motivated. When the question of whether or not he was acting on the impulse to live out a sexual fetish was broached, Alme replied, “I don’t know, maybe so.”

“I often hunted for beautiful shoes that I bought for Agnes. Once I found a pair of shoes for her. Then I discovered that they had a pair of shoes in a large size. So I bought them too. There was a lot of excitement in buying a pair of shoes with high heels,” Alme told Vi. After Alme began ordering women’s shoes online, his wife Agnes questioned whether he had been wearing her dresses in private. When he told her he had, she responded with shock, which later turned to frustration.

“When I heard that, I was shocked. And angry – which basically means I was scared. I felt that he had destroyed everything we had together and that I had to leave him,” said Agnes. Yet despite his wife’s outrage, Alme started dressing as a woman at home, a situation that “became a strain” for her, as she was struggling with a recent cancer diagnosis. Agnes has been open about her difficulties in accepting her husband’s fetishistic behaviors, and has said that she initially “tried to leave” him twice “in despair and grief.”

Now, Agnes accepts her husband’s new identity, although she is clearly uncomfortable with it. Many women facing similar situations haven’t been able to do that — there has been a surge in the publication of the memoirs of “trans widows” recently, as self-actualization journeys carry people away from their spouses and families.

Plenty of people are responding to this story by claiming that those drawing attention to it are merely highlighting weird cases in order to smear the transgender movement as a whole. The truth is that Alme is being interviewed by mainstream media outlets who are utterly accepting of all of his claims, and deleting social media responses by respondents who are not. Once you buy the idea that a man can become a woman, you’ve accepted that identity no longer needs to correspond with biological reality. A healthy man identifying as a woman paralyzed from the waist down is just a start.