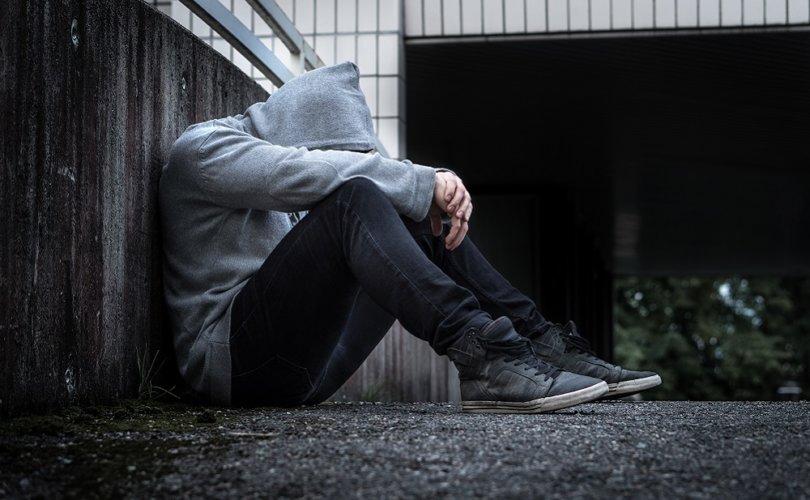 June 18, 2019 (LifeSiteNews) — It is one of the most heart-rending videos I have ever seen. It was shot outside the grotesquely named Hope Clinic for Women and shows a young man wearing a blue hoodie and a grey baseball cap pulled backwards over his shaggy hair pleading in front of the clinic doors. He is crouching, hands outstretched towards the closed door, pleading in a shrill tone of desperation that cuts straight to the soul. “Please don’t kill our baby! Abby, please don’t kill our baby! Abby…” and the voice shatters and trails off into wrenching sobs.

This video went viral on Twitter on Father’s Day. It was first posted to pro-life activist John Ryan’s Facebook account this past weekend with the following description:

Fathers Day weekend nightmare. This father is kneeling at the doors of this abortion mill crying out hysterically for the life of his child. His name is Tyler. Mothers name is Abby. Please pray for him. He said Abby has been abused in her life and one of those involved in the abuse, her stepmother, is the one that brought her here to kill their child. He said she has three other children at home including a 4 1/2-year-old who is very much aware that mom is pregnant and looking forward to the birth of her sibling. He said they planned this baby. The baby at risk is 12 weeks old. In the attached videos you can hear this father crying out for his child’s life. It is heartbreaking. This is what a real father does when his child is in imminent danger.

Many people often forget that not all dads at abortion clinics are there because they are eager to offload their offspring. Not all dads are selfish men unworthy of the title who wish to dispense with their responsibilities at all costs. Some of them desperately want the chance to care for their children and to be a dad. Some are at the clinic against their will. Their hearts are breaking as their children die, but they are as helpless under our laws as their pre-born sons or daughters, all caught up in a deadly dance that ends human lives and often destroys something of our humanity in the process.

In the many conversations I’ve had as a pro-life activist, I’ve met these men. The ones who did everything they could to persuade the mothers of their children not to go through with the abortion. The ones who felt as though they had no say and could say nothing, because that is what they had been told for their entire lives. The ones who mourned for years in painful solitude because they felt that their voices and their hurt could not be heard. The relationships that died with the babies who had been conceived in them. Many times, men are the problem in the abortion wars. Sometimes, they are the victims.

If you want to see how the abortion debate has hardened the hearts of many women to cold steel, read the comments beneath that video. It is a chilling look into a culture where children must die so that their mothers (and fathers) can live as they wish. Many of them laughed and jeered at the heartbroken man pleading for the life of his baby. Many others savagely suggested he find a “breeder” and “try again,” as if children were as replaceable as underwear. Some went as far as to celebrate the fact that we live in land where someone can exercise her right to have a child suctioned from her womb while the wretched father of that child howls his grief a few yards away. It takes a unique kind of cruelty for women to triumphantly celebrate the death of a child and mock the tears of the father, and seeing it is like watching femininity itself die with the millions of children who end up in dumpsters behind clinics with the word “Hope” in their name.

Abortion does not only end the lives of children. It often coarsens and hardens those who make that choice, the blood of the innocents scabbing over consciences so that only ugly laughter meets the pleading of a young man who simply wanted the chance to fight for his baby. Decades of bloodshed has produced these episodes of cruelty and heartbreak a thousand times over, and many of us have become almost immune to the pain and suffering we inflict, the price that must be paid for our culture to carry on the way that it does. We must be reminded, sometimes, by these moments of exquisite human suffering, that the price we are paying for our unhappy hedonism is not worth it. We are selling our souls, and it is making us as hollow as a womb freshly emptied by an abortionist.

Jonathon’s new podcast, The Van Maren Show, is dedicated to telling the stories of the pro-life and pro-family movement. In his latest episode, he interviews Nigerian pro-life leader Obianuju Ekeocha. They begin by discussing Ekeocha’s rise within the pro-life movement and move into drastic differences between African culture as a whole and Western culture. You can subscribe here and listen to the episode below: