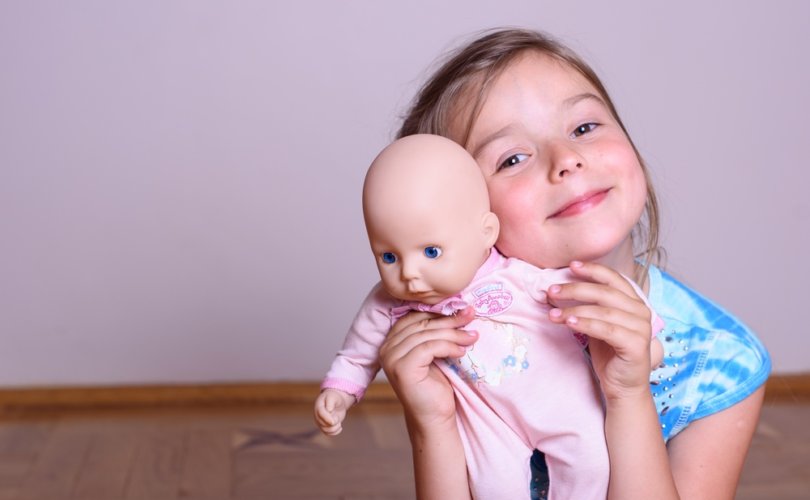 June 21, 2019 (LifeSiteNews) – Earlier this week, my wife dropped by our pro-life office over lunchtime with our toddler daughter. As we chatted with coffee, Charlotte began to wander through the office to do some exploring, poking here and there to see what she could find. There wasn’t much that was fragile around that she could break, so I wasn’t too concerned.

She soon found a bin of plastic 11-12 week fetal models and began to rescue them from storage.

“Baby! Baby!” she announced triumphantly, holding a fistful of the little models aloft and attempting to carry as many of them in her arms as possible. With that, she sat down and began to rock them. Noticing that my arms were empty, she thrust one of them at me and demanded that I assist her in rocking the tiny babies to sleep.

It struck me as I watched her that neither my wife nor I had ever told Charlotte that these little fetal models were babies. She had just known, by looking at them, that that is what they were. They were very obviously babies, and even at not-quite two-years-old, her instinct was to cradle them and protect them.

That, after all, is what one does with babies. Her only sibling has not yet been born, so nobody has taught her how to do that, either.

The fact is that little children are instinctively pro-life. They know a baby when they see one. They are not yet old enough and stupid enough to believe the scientifically incoherent babble about “clumps of cells” and “parasites” or murderous philosophies about babies in the womb being too small to qualify as persons. Babies are babies, and babies must be loved. It really is that simple.

Because children are instinctively pro-life, their impulse to protect and to see and recognize humanity in other, smaller children comes naturally— and abortion-supporting adults must root those instincts out if they would like to create a “pro-choice” teenager. It is for that reason that pro-life booths at community events drive Joyce Arthur of the Abortion Rights Coalition of Canada so crazy: Because children instinctively recognizing little fetuses as babies is a searing condemnation of her actions and her worldview, and the reactions of children come naturally rather than ideologically.

It is also for this reason that adults who support abortion become so angry at the sight of pro-life displays: Because they don’t know how to explain them to their children. For a pro-life parent, it is simple, even if it is a photo of an aborted baby: “Some people hurt babies, but we are working to stop that, and we love you and you are safe.” Children know that the world is not an entirely safe place, they just need to know that the adults in their lives are there to protect them.

Adults who support abortion, on the other hand, are stuck. Children often see pro-life displays and ask innocent, heart-breaking, and sincere questions such as “Who broke the baby?” Their parents, of course, want to somehow justify abortion to a child who has just perfectly encapsulated the horror of their grotesque worldview. They want to assure their child that it is not a baby, when in fact it is obvious to both the child and parent that it is. Because the voice of their own child often cuts straight to the conscience, they frequently end up getting furious at the pro-life activists that forced them to confront the issue in the first place.

It is interesting that only by stamping out the good, the true, and the beautiful in our own children can we persuade them to support the ideologies we have conjured up to give us permission to live as we wish at the expense of other, smaller children.

A little girl of two years old can look at a tiny, twelve-week-old baby and see a child like herself, but one that needs to be cradled and rocked. An abortion-supporting adult looks at that same baby in the womb and desperately tries to convince herself of a lie that even a child can see through: That the baby we can all see is no baby at all.

Jonathon’s new podcast, The Van Maren Show, is dedicated to telling the stories of the pro-life and pro-family movement. In his latest episode, he interviews Robert Oscar Lopez, a social conservative professor who was raised by his mom and her lesbian partner. Lopez is warning Americans that the Equality Act is a trojan horse that will “nullify” pro-life laws passed in various states and contains language that could lead to the abolishment of all sex-segregated bathrooms. You can subscribe here and listen to the episode below: