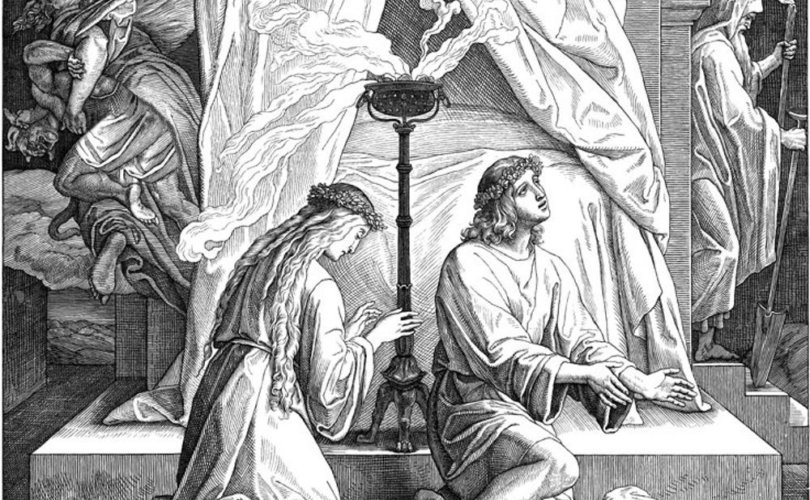 July 25, 2018 (LifeSiteNews) – It takes no special observational skills to see that the world around us is saturated with sex. But is it saturated with love? In some ways, it seems that the two are inversely proportional. The more untethered, aimless, and hyperactivated the sexual drive, the less room there is for personal love, that is, a friendship between persons for their own sake and not for the gratification they deliver. Chastity—that is, the virtue of controlling the sexual appetite for the sake of developing well-rounded human relationships—is valuable precisely because it protects and liberates the power of loving persons as they deserve.

In marriage, the power of loving persons that chastity makes possible includes not only one’s spouse, but the children whom God will entrust to the couple—the future persons who are hidden within the love of the present.

In the Old Testament book of Tobit, we are given an icon of noble married love in the couple Tobias and Sara. Tobias prayed on their wedding day:

We are the children of saints, and we must not be joined together like heathens that know not God . . . And now, Lord, Thou knowest that not for fleshly lust do I take my sister to wife, but only for the love of posterity, in which may Thy Name be blessed for ever and ever. (Tobit 8:5, 9)

We can learn at least five lessons from this dense pair of verses.

First, those who belong to the People of God—for Tobias and Sara, the nation of Israel; for Christians today, the new Israel, the body of Christ—are “children of saints” and should live guided by the law of God, which, as John Paul II reminds us in Veritatis Splendor, is always for our greater good and never for our harm. We should not therefore behave like heathens who are utterly ignorant of their own worth in the sight of God and the profound respect they should receive from others.

Second, prayer to the Lord is the condition sine qua non for progress in friendship, especially that of marriage. Notice that Tobias does not become absorbed in Sara, as much as he loves her, but turns to God, from whom he knows that he will receive the grace he needs to love her unselfishly. It is a paradox: if we want to love another person well, we cannot become fixated on or obsessed with that person, for this always suffocates and destroys love. The relationship has to be broken open to allow in the presence of God, who brings eternity and infinity with Him.

Third, Tobias calls his wife “my sister.” In speaking thus, he shows the intimate nature of his love, as between siblings at peace. His is not a consuming, possessive love that sucks dry the object and spits it out when finished, but a tender, chivalrous bond that looks more to what they have in common and how they might call forth the best in one another. This phrase “my sister” also calls to mind the ardent words of the Bridegroom to the Bride in the Song of Songs: “Thou hast wounded my heart, my sister, my spouse, thou hast wounded my heart with one of thy eyes, and with one hair of thy neck” (4:9). This verse testifies to an eros or erotic love that is nonetheless permeated with the reserve and respect of family love.

Fourth, Tobias swears to the Lord that he is not taking Sara “for fleshly lust but only for the love of posterity.” This seems like an astonishing thing for him to say—does he not love Sara herself? Is he only looking for children? But the contrast in his statement shows what he is thinking. For him, the contrast is between lusting after a woman’s embrace, which reduces her to a means, and loving her as the total woman she is, including her mysterious power of fertility, her motherhood. When a man loves a woman with children in mind, he is loving her more, because he is loving more of her, all the fullness that she holds in promise and in desire. In short, Tobias is bearing witness to the truth, taught by Casti Connubii and Humanae Vitae, that the procreative purpose of marriage is what defines the union of spouses, making it distinct from every other type of human relationship. Without offspring, the very existence of the two sexes, let alone their ordering to each other, would make absolutely no sense.

Finally, Tobias says that he and his wife seek a posterity “in which may Thy Name be blessed for ever and ever.” Here, most beautifully, we see that the ultimate end of marriage is not merely bringing children into the world, but bringing them into the world for the Lord, that they might know and love Him, and give glory to His Name. For Christians, this takes on an even deeper dimension, for we bring children to natural birth in order to bring them to supernatural birth in baptism, by which they are made over to the Father and become His children, living the life of His Son Jesus Christ.

Behold the unfathomable physical and spiritual fruitfulness to which Christians are given access!

And what is done so often by modern-day disciples of the Master, the One who said: “Let the little children come to me, and do not hinder them” (Mt 19:14)? They say “no thanks, we would rather hinder them.”

This was not the Jewish way; this is not the Christian way. Everyone who is going to get married or is newly married should align their hearts with the wonderful prayer of Tobias, which has so much to teach us in so few words.

One last thought. Today on the modern Roman calendar is the feast of Saints Anne and Joachim (on the traditional Roman calendar it is the feast of St. Anne, as her consort St. Joachim is celebrated on August 16th). In Byzantine icons, SS. Anne & Joachim are shown greeting one another at the city gate, tenderly embracing and kissing. Their love was pure but totally human: they, too, had longed for children, and had been afflicted with barrenness. The Lord intervened marvelously in bestowing on them the gift of the greatest human person in the history of the world: the Ever-Virgin Mother of God, Mary Most Holy. The prayer of Tobias is not, therefore, inherently about having many children. It is about loving children and being open to the gift of them, whenever and however the Lord wills to send them to us, and, most of all, humbly accepting His will.