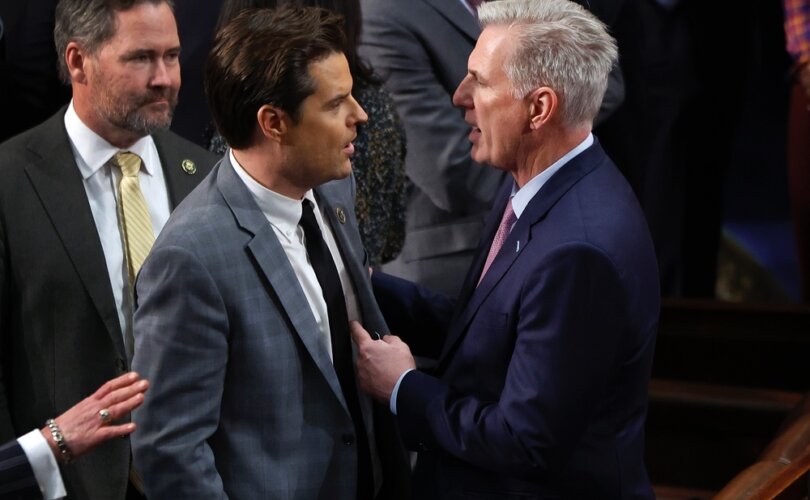 (LifeSiteNews) – The dust has finally settled on the debate over the next Speaker of the House. After a long, drawn-out process that had mainstream media outlets acting as if the republic itself was on the verge of collapse, swamp creature Kevin McCarthy emerged as the man of the hour after more than a dozen failed attempts to secure his new post.

It was always extremely unlikely that the Big Tech-owned McCarthy wasn’t going to be the next Speaker, especially after Donald Trump naively endorsed him for the job, a move that effectively vanquished any hopes of a true MAGA candidate from stepping forward. But that didn’t stop Florida Congressman Matt Gaetz, Colorado’s Lauren Boebert, and other America First Republicans — whom Trump should be praising — from winning significant victories during their courageous resistance to the GOP establishment.

Pedro Gonzalez from Chronicles has rightly pointed out that the battle over McCarthy’s speakership revealed just how “complacent” Americans have become to “government on autopilot.” The reason everyone was “freaking out,” he argued, was because there was actual debate and actual lobbying taking place over something of real importance. That rarely happens in the halls of Congress these days.

The question on the minds of many now is: what did Gaetz and his band of brothers actually accomplish? McCarthy became Speaker, after all. Didn’t conservatives lose? Well, not really. In fact, they obtained quite a few concessions that will lead to a number of changes to how things operate on Capitol Hill.

Perhaps the biggest difference in the newly installed 118th Congress compared to its predecessor is the ability of any one member to motion for a vote of no confidence in the Speaker. This rule was not in place during Nancy Pelosi’s reign from 2019 onward. It was, however, in effect under John Boenher, who resigned as a result of it in 2015.

Though it’s pretty much guaranteed McCarthy won’t be ousted should such a vote occur, if the 20 lawmakers who resisted his initial bid for Speaker hang together, they could continue to act as an effective check on his governance.

Another notable concession is that the Rules Committee and the Appropriations Committee will have Freedom Caucus members on it, a move that directly limits McCarthy’s influence over them. The entities essentially oversee how the House functions as a whole and what it spends taxpayer dollars on, two extremely powerful responsibilities.

McCarthy has also promised to have votes on several issues grassroots conservatives hold dear — abortion, border security, balanced budgets, and more. Below is a clip of Gaetz, Boebert, and Laura Ingraham (who praised the pair for their efforts despite berating them at the outset of their resistance), discussing those topics on Fox.

Moments ago, we passed the rules for the 118th Congress.

We’re going to have votes on term limits, balanced budgets, enforcement of our immigration laws, & more.

NONE of those things would’ve happened if we caved, but with these concessions, the House is in a stronger position. pic.twitter.com/4nrVTNQXy5

Gone, too, are the days of omnibus spending bills and ramming through proposals without prior notice. Gaetz successfully negotiated for a minimum 72-hour heads up before a vote takes place on any piece of legislation. The House will also have to consider spending bills on their own, and not as part of a larger, strung-together package. Solitary lawmakers will now be able to propose amendments on finance bills, a move that’s intended to increase transparency and empower individual members of the chamber. Additionally, McCarthy has pledged to take a hardline stance on debt-ceiling increases.

The biggest victory for the 20 holdouts was the establishment of a newly created committee tasked with investigating the “weaponization” of the FBI and the Deep State against conservatives. McCarthy notably agreed to place Trump supporter Thomas Massie on the committee, among others. Tucker Carlson has long-called for the creation of such an entity and advocated for it on his show not long ago. He spoke with Massie about it last week. Watch below.

.@TuckerCarlson suggested forming a new “Church Committee.” @GOPLeader is making this happen in the House rules package. I’ll serve on it, and we will go wherever the evidence leads us. pic.twitter.com/86gGvlGD5V

Trump Budget Director Russ Vought told Steve Bannon recently that the deal McCarthy was forced to strike represents a generational victory over the D.C. “cartel.” He even went so far as to say a “paradigm shift” has happened thanks to the new “decentralization” that’s going to be ushered in. You can watch that interview by clicking here. Time will tell if Vought is right or if Congressional Republicans will return to their typical, middle-of-the-road approach that has historically failed to make lasting, meaningful changes in our nation’s capital.