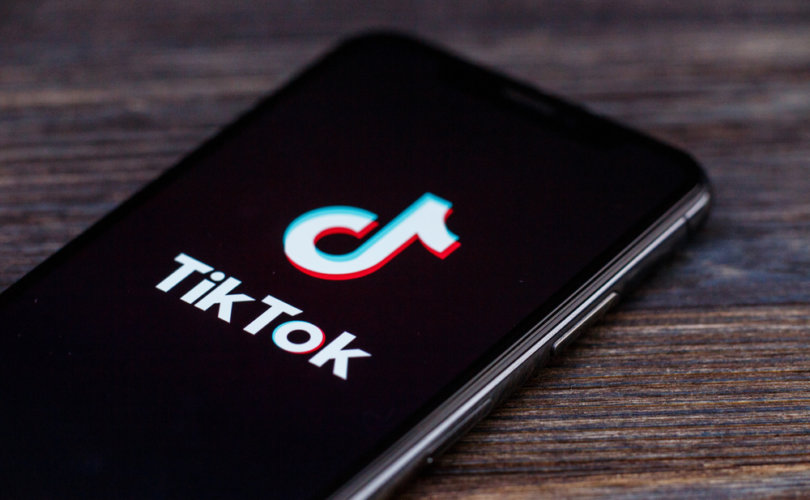 EDINBURGH, Scotland (LifeSiteNews) — When I was a teenage pro-life activist in Toronto, I used to wonder if the RCMP had a file on me.

It was probably just a bit of adolescent self-absorption — and the hope that I was just that important to civil authorities. However, having been thoroughly frightened this morning by a 2021 video-essay entitled “TikTok Is Worse Than You Thought,” I find myself wondering again who has a file on me — or at very least on my computer and smartphone — and what they might be doing with this information.

The thesis of “TikTok Is Worse Than You Thought” is that the do-it-yourself entertainment app is a Chinese cyberthreat. The film argues that TikTok is actively spying on its users, foreign and domestic, for the People’s Republic, intentionally shortening the western attention span, and turning potential enemies into dopamine addicts while encouraging civic and military virtues in Chinese children and teens.

That the pseudonymously produced, sitcom-length video is available on another rich seam of data — YouTube — is an irony that should not put you off seeing it and considering the claims it makes.

According to the short film, ByteDance, Ltd., the Chinese company that owns the apparently addictive tool, uses TikTok to mine information about its users — their images, their other apps, their search history, their location, even their keystrokes. By law, it must share that data with the Chinese government. For this reason, TikTok has been banned by some countries, notably India. The U.S. military, the film says, has banned its use by personnel and their families.

Now, you might not care who knows what web material you consume or how you type. Perhaps you imagine data miners are like benevolent librarians who track of your borrowings to learn your tastes and help you find new books to enjoy. However, you wouldn’t like the librarian who directed your ten-year-old children towards the Erotica section while giving her own children Marcus Aurelius’ Meditations and Sun Tzu’s The Art of War.

And according to “TikTok Is Worse Than You Thought” that is exactly what TikTok is doing. While hooking American kids on mindless trash that amuses, titillates, and corrupts them, it presents Chinese children with attractively produced propaganda promoting the thought of Xi Jinping and storylines underscoring old-fashioned civic virtues. The Art of War, by the way, is now mandatory classroom reading.

This is where I am tempted to write that I, for one, welcome our future CCP overlords. Who wouldn’t want to live in a society that promotes old-fashioned civic virtues? However, one of the old-fashioned civic virtues in which the Chinese Communist Party is clearly interested is Han-supremacist racism, and my probable fate, if conquered by Xi Jinping in World War III, is residence in a concentration camp/amusement park to do Scottish folk dances at gunpoint for rich tourists from Hangzhou.

World War III gets a mention in “TikTok Is Worse Than You Thought” because, it argues, the Chinese Communists have been bent on world domination since 1949, and the West has stupidly helped them towards their goal by giving them our manufacturing jobs, selling them our infrastructures, and buying all their products. We have been living in a hedonistic bubble, the film declares, and “our bubble burst” only in 2020.

Well, we all know what that looked like, and — by the way — thanks to the Wu Flu, 1.6 billion plastics masks went into the oceans in 2020 alone. Guess which country made most of them? Guess!

Happily, my Made in Canada mother sewed some three-ply cloth masks, so I was never  forced to buy Made in China plastic products to keep my neighbors “safe.”

And except for a handful of craft materials, I’ve done a reasonably good job in keeping my money out of the CCP’s coffers over the past two years. However, I wonder if I have been quite as assiduous about keeping them out of my brains.

As an inveterate blogger, I’m no poster child for reserve. However, I am thinking it’s time we brought privacy back — our own privacy, I mean. Obviously we should be paying a lot more attention to the Chinese Communist Party. We should begin by thinking very hard about how to keep its candy-coated psychological warfare away from our kids.