Hey David Suzuki, Canada is not full and your policies would kill Medicare

David Suzuki, the Canadian environmentalist often touted as having all the answers to halt (alleged) global warming and even to push back (allegedly) rising sea levels, has been caught telling a whopper of a fish story.

On Canada Day, during an interview with a Quebec reporter, he claimed that “Canada is full”, explaining that we have no room for immigrants in this vast country.  “Although it’s the second largest country in the world, our useful area has been reduced”,  said Suzuki.   He then slammed Canadian immigration policy as “disgusting” for trying to maintain our population (and therefore our economy) by bringing immigrants into the country.

On its face, Suzuki’s claim is a total lie.  Canada is a vast, empty country.  Half its population is contained within the relatively tiny geographic areas of Toronto, Montreal, Vancouver, Ottawa, Calgary and Edmonton.  A glance at a population density map (below) totally discredits Suzuki’s ludicrous claim. The graph’s legend shows that the only heavy population density exists in those areas which are purple and dark red.  The light coloured areas, which cover most of the country, have almost no people or are nearly desolate stretches of forest, farmland, prairies and snow. 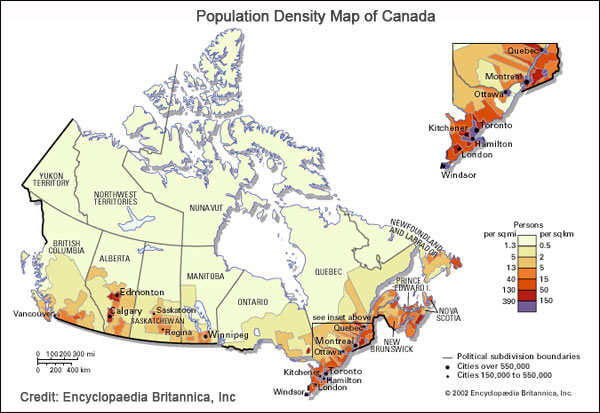 Sorry Mr. Suzuki, you’re embarrassingly wrong.  Canada is not full, and we have plenty of room for immigrants.

The reduced population that Suzuki so badly craves for Canada, would collapse the country’s social safety nets – namely Medicare, which is already insolvent, and Old Age Security, which is financially unsustainable.

Analysts have warned for years that Medicare and Old Age Security are unsustainable given our demographics. The federal universal health care system was enacted with legislation by Lester B. Pearson in 1966, during a time when each woman had an average of approximately 3 children. See Figure 1. 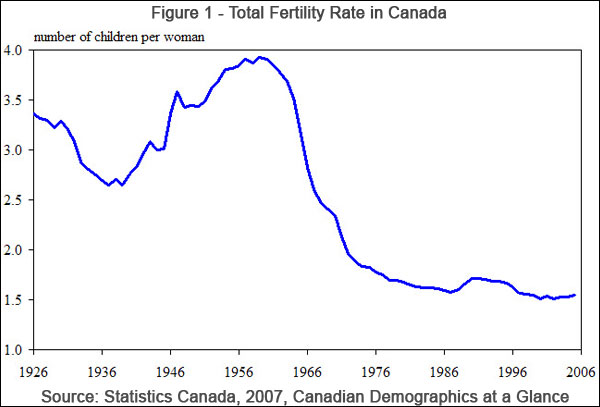 In 1966, that economic model made more sense. It was based on the birth rate which inevitably dictates the number of workers who end up paying taxes to support social programs, like our publicly funded health care system and OAS.  However, the model no longer works because the numbers have changed dramatically.

After the legalization of abortion and widespread contraception, Canada’s fertility rate fell steadily and dramatically, to 1.61 children per woman as of 2011. This resulted in a corresponding fall in the ratio of Canadian workers to pensioners which proved economically disastrous. See Figure 2.

The dangerous fall in the birth rate, a consequence of abortion and contraception, has directly decreased the ratio of workers (who pay taxes) per pensioner (who receives taxpayer-funded medicare, OAS, etc). That ratio has been decimated since 1966.  In 1970 for example, Canada had almost 6-1/2 workers per pensioner. Today there are barely 4 workers per pensioner.  The decline represents a roughly 38% reduction in the number of future workers. By 2030 the ratio is projected to be approximately 2.5 workers per pensioner. This means that our universal health care system (i.e. Medicare) and public retirement income systems are unsustainable. It is a major economic and social crisis which immigration alone cannot solve. 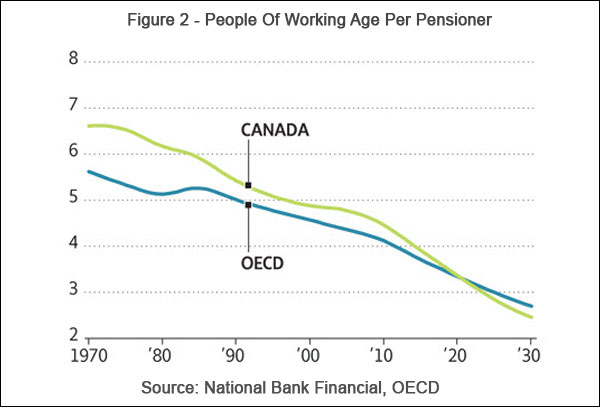 Why is it that immigration alone is inadequate to solve the looming Medicare and public pension crisis? Well, it boils down to age and taxes.

Let’s use an example of a 50 year old immigrant who comes to Canada, starts working immediately, retires at 65 and then dies at 85. This means he will have contributed into OAS and Medicare via payroll tax deductions for 15 years, and then received taxpayer-funded benefits through his retirement for 20 years. By contrast, a young person born in Canada who starts working at age 22, retires at 65 and dies at 85 will have used up taxpayer benefits for the same 20 year period, but contributed through his payroll tax deductions for 43 years. That gap in lifetime tax contribution is the key.

A Simple Solution to a Simple Problem

The reason why we have an impending public pension and Medicare implosion problem is quite simply that Canada has too few workers per pensioner.

Fortunately, the solution is simple too, albeit long term.  That is, we have to eliminate abortion, discourage contraception and encourage a higher birth rate.  Now, if Saint Suzuki, the alleged answer man,  came out with that conclusion, I might become a fan instead of a critic.