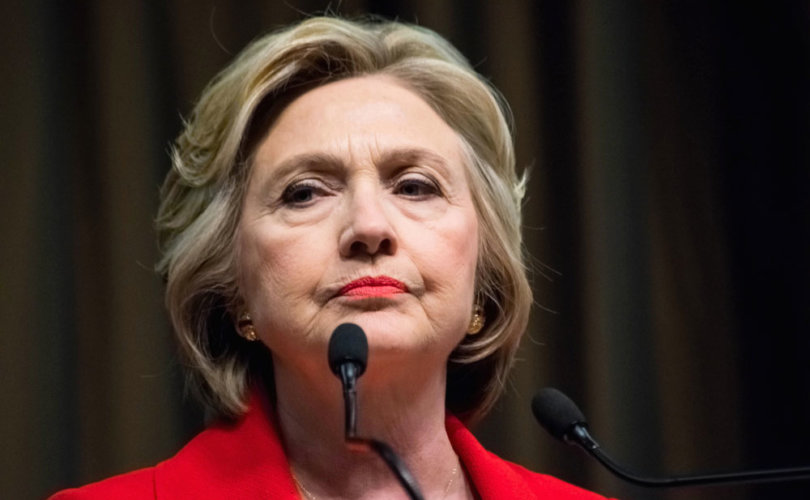 June 20, 2018 (LifeSiteNews) – The controversy over the Trump administration separating families caught illegally crossing the border for the duration of criminal proceedings has led to some unlikely champions of children’s rights grabbing headlines.

“Those who selectively use the Bible to justify this cruelty are ignoring a central tenet of Christianity,” failed presidential candidate Hillary Clinton declared. “Jesus said ‘Suffer the little children unto me.’ He did not say ‘let the children suffer.’” Former First Lady Laura Bush said the policy was “cruel” and “immoral.” New York Democrat Sen. Kirsten Gillibrand blasted the policy as an “evil, dark thing.”

Over the weekend, Planned Parenthood — yes, the abortion giant Planned Parenthood — tweeted that “all of the fathers and parents who have been separated from their children at borders” were in “our hearts and minds” for Father’s Day. NARAL President Ilyse Hogue chimed in with a Medium op-ed decrying the “inhumane” and “evil” “torture” of these children,” and claiming that the issue “demolishes any last shred of moral credibility not only of Trump and his administration but of anyone who claims to be pro-life and has not denounced these actions.”

On Tuesday, the Huffington Post’s Jennifer Bendery seized on that last theme with a piece highlighting the responses by pro-life and Christian, conservative leaders. “[W]e refrain from public comment on immigration and many other topics” to focus on “the first right without which no other rights matter,” Susan B. Anthony List President Marjorie Dannenfelser explained. Bendery claimed SBA List and other groups are “MIA” (missing in action) on the crisis.

The facts behind the story are complex and misunderstood, and the pictures are heartbreaking. Pro-life lawmakers such as Ted Cruz and Mark Meadows have already proposed legislation they say would solve the problem, but whatever the truth behind any of that may be, using it to attack pro-lifers is just putting a new sheen on an old smear.

Pro-abortion activists have always tried to tell us “you’re not really pro-life unless you support  ___,” with the blank filled in with contraception, gun control, ending capital punishment, environmentalism, government poverty spending, socialized medicine, pacifism, or any number of other causes. It’s never made sense on any level.

For one thing, anyone who’s spent more than five minutes in the pro-life movement can tell you that many pro-lifers do, in fact, disagree with each other on all of the above. The pro-life cause of ending abortion, however, attracts millions of people from all over the political spectrum because it directly speaks to our most basic moral intuitions, to protect and nurture life. You don’t need a specific economics education, for instance, to see that killing babies is wrong.

Second, since when is it scandalous for any single-issue organization to decline to diversify? Nobody asks a tax policy group to take a position on abortion, or an environmental outfit to wade into the gun debate. It’s generally unwise for any organization united around a common cause to spend its supporters’ time and donations on a different cause that might divide those members.

More importantly, no single person or organization can do it all, and most people understand that having a diverse range of organizations channeling people’s passion exclusively toward specific issues is ultimately better for understanding and correcting every issue, rather than expecting everyone to spread themselves thin among dozens of priorities (provided that the cause in question is correct, of course).

That brings us to the moral basis for pro-lifers’ focus on abortion over the border crisis. From immigration to crime to homelessness to disease, there are countless ways in which men, women, and children suffer every day. Most of society’s ills are due to any number of complicated factors (be it personal, cultural, legal, economic, or environmental). They often involve competing goods, and don’t always have simple answers. Well-meaning people can reasonably disagree on how to address them.

But with abortion, we’re not talking about how to most effectively help children. We’re talking about whether to allow people to actively commit literal violence against them (and never out of necessity). There’s no good-faith defense of it, no serious case for letting it continue. The moral urgency of ending such evil is absolutely unique, and it demands activists committed to fighting it exclusively, without distraction or dilution of the message.

Dilution of abortion’s evil is, of course, Planned Parenthood and NARAL’s real goal. Abortion is the last thing pro-aborts want to discuss in any abortion debate, and stories like this present opportunities to change the subject to a perceived injustice that supposedly cancels out — or at least distracts from — the blood on their own hands.

That’s why pro-life groups’ response should be to double down on their original focus, turn the hypocrisy charge around, and make clear that whatever the right way to stop separating kids might be, it's nothing compared to the disgrace of killing them.