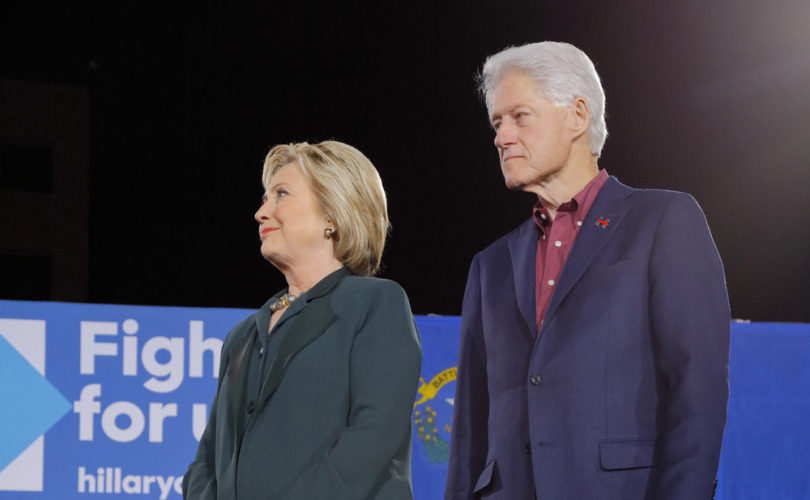 March 15, 2016 (LifeSiteNews) – The Clinton administration enacted a population control policy in Haiti designed to stop poor black people from reproducing, according to a prominent left-wing website.

After reading an internal memo from the U.S. Agency for International Development (USAID), the authors concluded that under the Clinton administration, “the fundamental goal of the American government is to keep the natives from breeding.”

The June 1993 document (unearthed by Ken Silverstein in CounterPunch) states policy “targets” for Haiti baldly: to obtain 200,000 new “acceptors” of contraception; a “social marketing component” target of “6,000 cycles of pills/month,” and the establishment of 23 facilities to provide sterilizations–soothingly referred to as “voluntary surgical contraception,” a goal that has been exceeded.

There is no mention of any “targets” with regard to women’s health.

The cynicism of the “empowerment” rhetoric is also apparent in the memo’s main recommendation, the “demedicalization or liberalization of service delivery.” The agency suggests “elimination of the practice of requiring physician visits” before doling out hormonal methods.

In plainer English, this means that AID feels that doctors in Haiti need not waste time with pelvic exams or pap smears; just get the “acceptors” on stream with the hormonal method of choice.

﻿A group calling itself the Women of Koalisyon, a Haitian women's group based in Brooklyn, said that the local population was told vasectomies were reversible and could prevent AIDS. Women were promised clothing if they agreed to be implanted with the Norplant long-acting contraceptive – and their pleas to remove the LARC fell on deaf ears.

The authors conclude that talk about women's health care and feminist motivation was merely a smokescreen for a population control agenda. “Sterilization, along with less drastic inhibitors, is far easier, particularly when it is made palatable to the liberal conscience by being tricked out in the verbal bunting of 'empowerment' and 'respect for the rights of women,'” they wrote.

While disturbing, the report dovetails with the Clintons' radical advocacy of abortion-on-demand and Democratic policies promoting long-acting reversible contraceptive use. Hillary Clinton has said she is “really in awe of” Margaret Sanger, the founder of Planned Parenthood and an outspoken advocate of race-based eugenics, for “her courage, her tenacity, her vision.” In 1921, Sanger wrote, “Eugenics is suggested by the most diverse minds as the most adequate and thorough avenue to the solution of racial, political and social problems.”

This report – reprinted from 1993 – is significant, because it comes from a far-Left publication. This isn't a pamphlet produced by the local Fatima apostolate; Cockburn, who died in 2012, was one of the most celebrated hard-Left authors who regularly chided liberal media personalities for not being “progressive” enough.

Put simply, Hillary Clinton's population control policies concerned those on the far-Left as much as those motivated by limited government, libertarian principles, or the Catholic Magisterium.

The article is well worth reading for the history of the population control movement going back to National Security Memorandum 200, which promotes “zero population growth” in the Third World to assure “the smooth flow of needed materials” to the United States.

But more importantly, it serves as a contemporary indictment of Hillary Clinton, who has been quick to claim credit for her husband's achievements in order to bolster her “experience” and electability. During the 1992 campaign, she told voters, “If you vote for my husband, you get me. It's a two-for-one, blue plate special.” Commentators spoke of their first term as a co-presidency.

This piece raises a number of important questions as voters go to the polls today. What do Mrs. Clinton's African-American supporters think of the fact that she – and her husband, whom some styled “our first black president” – essentially presided over a population control program that allegedly used coercive and misleading means to keep blacks from reproducing?

What does this say about the Left's claim that, while conservatives emphasize economic liberty, liberals support “personal liberty” on matters like sexuality?

Should the government really be involved in doling out contraception without a doctor's examination to keep disfavored groups from multiplying?

If Hillary Clinton becomes president, would she enact policies like these again? And will she limit her population control program to people living overseas?