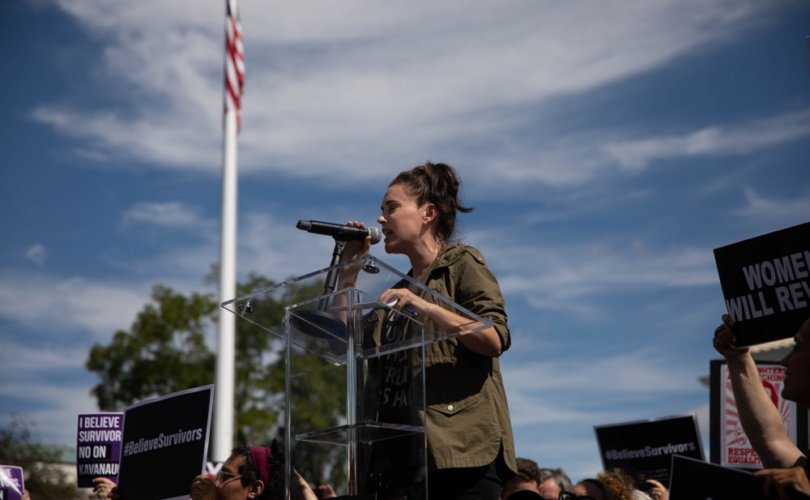 August 21, 2019 (LifeSiteNews) — Since relaunching the #MeToo movement in October of 2017, Alyssa Milano has been popping up everywhere. A onetime TV actress and now activist, she showed up at the Brett Kavanaugh hearings, responded to state-level abortion restrictions by suggesting a sex strike (a proposal pro-life leaders heartily endorsed), and has campaigned against pro-life legislation. She appears to be extraordinarily passionate about abortion.

This week, the 46-year-old finally revealed the real source of her passion about abortion on her podcast, appropriately named Sorry Not Sorry: she had two children aborted in 1993, when she was in her twenties. Despite the shocking fact that she had two abortions inside a single year, Milano wanted her listeners to know that she does not regret her decisions in the slightest.

“In 1993, I had two abortions,” she stated. “I was in love for the first time in the breathless way you can only be in love when you are young. It was huge — overwhelming, even. It filled every part of living. It was a joyful and exciting time in my life.” She didn’t specify whom she was referring to in the podcast, but that year, she apparently moved in with fellow actor Scott Wolf. Milano was taking the pill as well as Accutane, a medicine intended to fight acne. Despite being on the pill, Milano got pregnant.

Despite her Catholic background, Milano says she knew she was “not equipped to be a mother and so I chose to have an abortion. I chose. It was my choice. And it was absolutely the right choice.” Why? Because it was “something I needed — like most health care is.” Note here that the only reason Milano says it was the right choice is because she preferred it. She didn’t want a baby yet, so when a baby showed up, an abortionist was procured to make the baby disappear. She also didn’t explain how having a healthy child suctioned out of her womb constitutes “health care.”

And then it all happened again. “A few months later, I found out I was pregnant again,” she related on her podcast, and “once again I made the right decision to end the pregnancy.” Why was it the right decision? Again, simply because she didn’t want to have children yet. She then ruminated on the recent pro-life laws she has dedicated herself to fighting and actually claimed that she might not have her two born children — a son in 2011 and a daughter in 2014 — if she hadn’t aborted the first two, because she would not have been “a mother who was so very, very ready for them.”

Milano does not regret the loss of her first two children, nor does she regret refusing to allow them to be born. If she had, she said, “I would never have been free to be myself — and that’s what this fight is all about: freedom.” Her motivations, she noted defiantly, are “real” — nobody denies that — and “they are none of your f‑‑‑‑‑‑ business.” She didn’t bother to explain why she was doing an entire podcast on her abortions if she simultaneously felt that they were nobody’s business.

Milano’s confession is revealing. Although the progressive press hails her as a hero, her story highlights starkly what this is really all about: selfishness. Children need their mothers and fathers, but many people would prefer to sacrifice their children in order to pursue illustrious careers. (Countless paths to stardom have been paved with the blood of unwanted pre-born children.) Milano can call it freedom if she likes, but the brutal reality is that two of her children died in 1993 because she felt that their presence in her life would be an unwelcome intrusion. She can claim that abortion is no big deal, she can claim that the decisions were difficult to make, but at the end of the day, the simple fact that this was driven by lethal selfishness towers above it all.

Jonathon’s podcast, The Van Maren Show, is dedicated to telling the stories of the pro-life and pro-family movement. In his latest episode, he interviews Bobby Schindler, brother of Terri Schiavo. They discuss the inside story of the fight to save his sister’s life and the work he does now to protect the medically vulnerable. You can subscribe here and listen to the episode below: