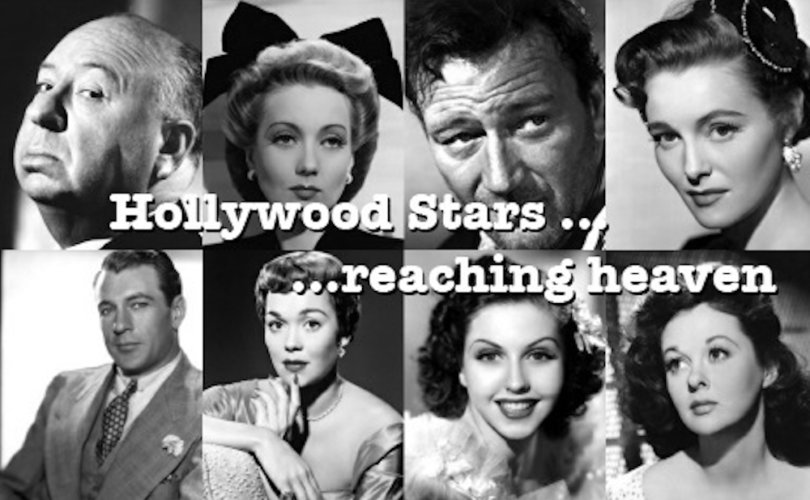 February 14, 2019 (LifeSiteNews) – For many of us, what we know about the great stars from Hollywood’s golden years is limited to the glamorous images created for them during their big screen heydays. We can name their classic movies, favorite roles, and perhaps a string of spouses or scandals.

But a surprising number of those larger-than-life Hollywood personalities came to recognize the emptiness of their worldly achievements in view of the power of Christ’s cross and the surpassing value of knowing Him.

In Oasis: Conversion Stories of  Hollywood Legends, author Mary Claire Kendall recounts for us the true climax of these lives we thought we knew.

That climax is their love affair with God, in many cases just beginning as their lives were ending. They realized they weren’t created for Beverly Hills or Palm Springs, for celebrity and fame, but for God’s Kingdom.

During his storied career, John Wayne – the ultimate icon of American manhood during his day – would quietly slip off movie sets to attend Catholic Mass. Wayne was not a Catholic, but the spark of faith was there.

Kendall writes, “In the waning days of John Wayne’s life, Maureen O’Hara made an impassioned plea for him to receive the Congressional Gold Medal. ‘John Wayne is the United States of America,’ she told the U.S. Congress.”

This man’s man a hardworking, hard-drinking, heavy-smoking, chess playing, cussing, short-tempered lover of beautiful women — came to epitomize, like no other, American independence, courage, strength and heroism in a film career spanning 50 years and 185 films.

Congress honored him with that distinguished gold medal on May 26, 1979 — his seventy-second birthday. The drama did not stop there. Fifteen days later — as he prepared to slip from the bonds of earth — he won the ultimate gold, arming himself not with a Winchester but with the sacramental grace of baptism and extreme unction — storming heaven in true Wayne fashion.

Alfred Hitchcock, director of some of Hollywood’s greatest suspense films who had long ago left the sacraments, realized he was dying and asked a priest to visit him in his Bel Air, California home in order to hear his confession. The priest recounted what happened the following day when he returned to Hitchcock’s house to say Mass:

After we chatted for a while, we all crossed from the living room through a breezeway to his study, and there, with his wife, Alma, we celebrated a quiet Mass. Across from me were the bound volumes of his movie scripts, The Birds, Psycho, North by Northwest and others — a great distraction. … Hitchcock had been away from the church for some time, and he answered the responses in Latin the old way. But the most remarkable sight was that after receiving communion, he silently cried, tears rolling down his huge cheeks.

Gary Cooper, whose portrayal of rugged individuals during a long movie career reflected his own life, decided he had “to find out how to be less of a bum.” He ultimately followed his wife and daughter into the Catholic Church.

In 1961, as he lay on his deathbed, suffering great pain, he asked a visitor to deliver a message to their mutual friend, author Ernest Hemingway.

When the pain had passed, Cooper reached his hand over to the bed table and picked up a crucifix, which he put on the pillow beside his head.

“Please give Papa (Hemingway) a message. It’s important and you mustn’t forget because I’ll not be talking to him again. Tell him … that time I wondered if I made the right decision” (regarding his conversion) — he moved the crucifix a little closer so that it touched his cheek — “tell him it was the best thing I ever did.”

Cooper didn’t clutch his three Oscars at the end of his life; it was Christ’s crucifixion that comforted him and brought him hope.

Patricia Neal, who won an Academy Award for best Actress, began an affair with Cooper during the filming of The Fountainhead in 1949 and ended up aborting their child, a decision that she regretted for the rest of her life. Yet Neal, like Cooper, went on to become a Catholic.

Neal married writer Roald Dahl (Charlie and the Chocolate Factory, James and the Giant Peach, Matilda) and raise six children, but the affair with Cooper continued to vex her. It was Cooper’s only child, Maria, who as an adult initiated healing in Neal’s life when she sent a letter to Neal declaring, “I forgive you,” for the affair that had shaken her parents’ marriage.

Despite not being a Catholic, thanks to Maria Cooper, Neal began to go on regular retreats at an Abbey run by Mother Dolores Hart, herself a former creature of Hollywood, having starred in movies like Where the Boys Are and Come Fly with Me, which had  announced the arrival of the sexual revolution in the early 1960s.

Though Neal waited until the day before she died in 2010 to convert to Catholicism, she is buried at the Abbey she grew to love.

Actress Ann Sothern left the glamorous life she knew in Los Angeles and moved to Idaho, where “spiritually she soared.”

“I don’t want to own anything anymore,” said Sothern. “You reach a point when possessions possess you.” The few prized possessions she retained “were carved statues of saints, old photographs in gilt and silver frames, wooden crucifixes, porcelain figurines and an ebony piano.”

Jane Wyman was baptized along with children Michael and Maureen Reagan on the feast of the Immaculate Conception in 1954 and as she grew in her faith “she became a Third Order Dominican, acquiring a gravitas that set her apart.”

The woman who had been married to future President Ronald Reagan, and who had played the doyenne of Falcon Crest, was buried “in a simple pine coffin, wearing the habit — about as far from the Hollywood glitz and the need to ‘get noticed’ as one could get,” explained Kendall.

Who knew there existed all along such a “great cloud of witnesses” (Hebrews 12:1) in the environs of Tinseltown?

“In the end, just as they were so generous with their talents,” writes Kendall, “so, too, was God with his grace, showering it abundantly to help them discover the key to happiness lies not in the dreams Hollywood manufactures, but in the true joy that comes only from God, which, as St. Josemaria Escriva de Balaguer always said, “has its roots in the form of a cross.”