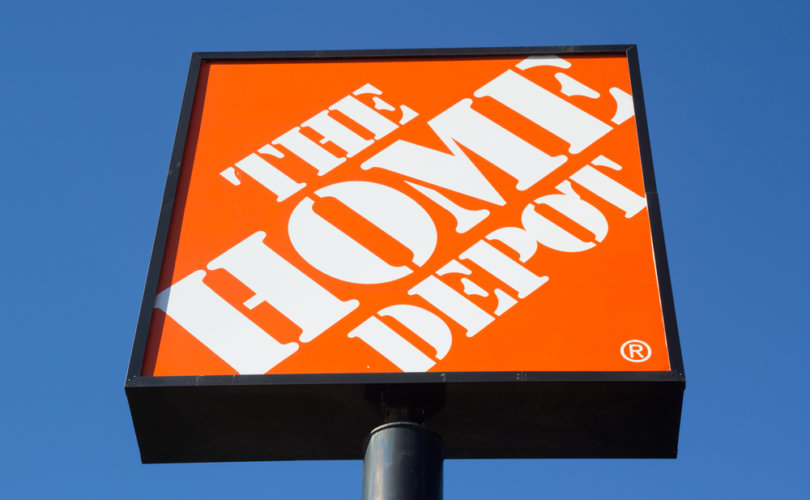 (LifeSiteNews) — What happens when corporations are colonized by cultural revolutionaries? We are beginning to find out. Over the past few years, business after business has turned from serving customers to waving the rainbow flag, plugging for progressive causes, bullying local governments passing pro-life legislation and other conservative laws, and implementing diversity and equity training (based on critical theory) in their boardrooms and staffrooms. Steve Soukup lays out how it happened and how conservatives can push back in his recent book The Dictatorship of Woke Capital: How Political Correctness Captured Big Business, and he joined me on my LifeSiteNews podcast to discuss his thesis.

A recent example of corporations pushing re-education on employees was posted to Twitter by Libs of Tik Tok. It features a package purportedly from a Home Depot in Calgary, Alberta, titled “Leading Practices: Unpacking privilege.” It is, as they say, quite a ride.

“Privilege” is defined as “a special advantage that may be earned or unearned,” and fair enough. “White Privilege” is next: “Societal privileges that benefit white people beyond what is commonly experienced by people of colour under the same social, political, and economic circumstances.” Warning bells are going off, but the roller coaster really starts when the pamphlet begins to list examples of “white privilege.” Such as:

“If you’re confident that the police exist to protect you, you have white privilege.”

“If you expect time off work to celebrate your Christian holidays, you have Christian privilege.”

“If you can use public bathrooms without stares, fear or anxiety, you have cisgender privilege.”

“If you don’t have to explain that your spouse is of the same gender, you have heterosexual privilege.”

Oh, and in case you’re not white, Christian, normal, or straight, the luminaries at Home Depot have a catch-all to make sure you feel good and guilty, too:

“If you don’t have to think about it, it’s a privilege. CHECK YOUR PRIVILEGE.”

That about covers it, doesn’t it? If you’re any or all of these things and you don’t feel guilty, you should feel guilty for not feeling guilty. A photo of the second page of the privilege package was also posted, featuring handy tips for how to interrogate yourself into believing the woke framework for how society works and should works, and how to trick yourself into feeling like a racist / homophobe / transphobe / sexist. Which is important, because if this pamphlet is to be believed, many people are actually bigots but are simply not educated enough to realize it.

The photos appear to have originated from this Twitter account, which posted them with the caption: “From a friend that works at Home Depot, this is the kind of crap on display in the lunchroom.”

After the photos got over 8,000 retweets and Home Depot began trending with some followers calling for a boycott, a U.S. Home Depot representative was sent out to reassure everyone that the material is “not part of any countrywide training” and that “while we fully support diversity across our company, this material was not created or approved by our corporate diversity, equity, and inclusion department. This was a resource in our Canadian division and not part of any required programming.” In other words: Chill out, everyone. It’s just Canada. They’re woke like that.

One reason for the backlash is the fact that Home Depot — a store where people go to buy tools and construction supplies — is not the sort of place anyone expected to go woke. Nobody is worried about whether the kid telling you which aisle has the hinges has able-bodied privilege or whatever. They just want him to know what he’s talking about, and perhaps have just enough practical knowledge to advise you on which hinges are best for the type of gate you’re trying to hang.

But this is 2022, and with the long march through the institutions complete, the cultural revolutionaries are working on the next phase of colonization. See you at Home Depot.