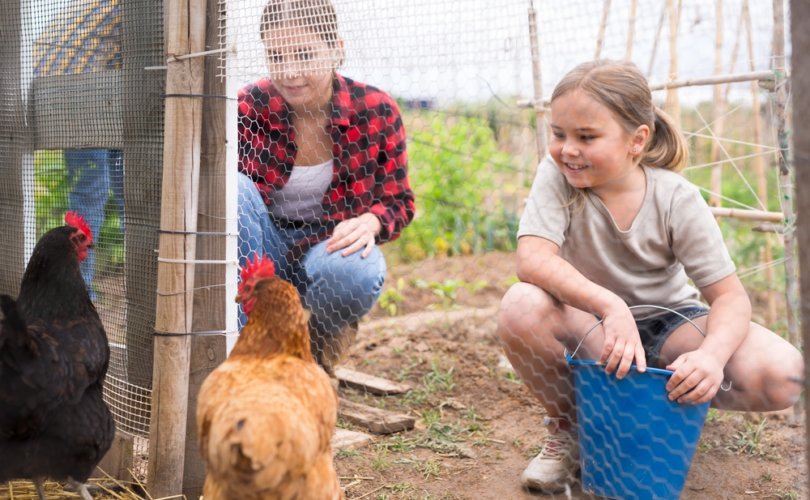 (LifeSiteNews) — A team of LifeSite reporters – John Paul Gutschke, Michael Hogan, and I – went this weekend to the Conference of the Homesteaders of America in Front Royal, Virginia with some 5,000 attendees. It was a thrilling experience that we wanted to share with our readers, also in order to encourage them to look into homesteading as a response to our current political and societal unrest and as a way of staying independent.

John Lovell, one of the speakers at the conference, rightly said: “If you are not self-sufficient, you are prone to be an easy slave.”

Self-sufficiency as a protection against enslavement

There was no doubt in the minds of many of the speakers at this year’s Homesteader Conference that we are heading into difficult times. “The writing is on the wall,” Lovell, a veteran and former member of Special Operations, told his 500 listeners. He reminded us of the “plandemic,” food shortages, gasoline price hikes, and the lack of trust in politicians. And yes, he also informed the audience that “Bill Gates owns more farmland than anyone else” and that there are many “food processing plants burning” mysteriously in our country.

Lovell himself has been homesteading for only a few years now, saying he was “chased” into it. He grew up in a suburban neighborhood and thus had no experience with raising cattle and growing crops. But troubling times of history – which are ever returning, in his eyes – call us to become real and do something to protect our families and friends.

Listening to the speakers and conversing with participants at this conference, with people from all over this country and even beyond, it was clear that this is a time to restore love for God, country, and family.

Founder of the Warrior Poet Society, Lovell insisted in his speech that one not only needs to homestead, but also to protect one’s farmstead. And for that, one needs training and planning. For him, it is clear that at a time of civil unrest or severe food shortages – “we are only nine meals away from anarchy” – one needs to know one’s community and pull together. In order to be able to guard one’s own food supplies, one would even need to invite other families to move onto the farmstead and to work together in defense of it. Who could be alone and stay up day and night to be on guard?

While this sounds perhaps a bit unrealistic and scary, Lovell made it clear that we have had a period of “wealth and technology” that protected us and made us forget essential knowledge for survival in a not-so-safe environment. The security in our society, in his eyes, “will quickly change.”

“We need forgotten critical knowledge,” the husband and father of younger children explained.

“Don’t be bullied anymore by globalists!” he called out, explaining that we have to “put trust in God, not in politicians.”

“My hope is in King Jesus,” he exclaimed to the loud applause of his large audience.

The atmosphere of this conference was marked by friendliness and warmth. There were many families, people young and old, most of them gun owners. When Lovell asked his audience who owned guns, nearly everybody lifted up his or her hand.

How to start a homestead

If we wish to return to the basic principles of God, country, and family, the question arises: how to go about it?

Other speakers of the Homesteaders of America Conference, such as Joel Salatin, the owner of the Polyface Farm in Virginia, and Shawn and Beth Dougherty from Ohio, showed the audience how to start a homestead.

Speaking to a crowd of some 800 people, Salatin tried to encourage people to lose their fear of starting a homestead. “Start small,” he recommended, insisting that “good enough is perfect.” Even a small piece of land can be of help to start raising some animals or to grow some vegetables. The founder of the Polyface Farm pointed out that along the highways of Mexico, many a cow is seen grazing and keeping the grass down, while in Italy and other European countries, many a city family has a little garden slot at the outskirts of the city to go to on the weekends.

Salatin also stressed the beauty of living a quieter life on the countryside, with less driving and with raising one’s children in nature, with bonfires and frogs. He explained that there are many opportunities on the countryside – such as taking care of elderly people on a farm who would welcome the caretaker to farm on their land – if one looks for them.

“Create hope and help when society becomes helpless and hopeless,” was Salatin’s motto, and he encouraged his audience to take care of that creation “that God has given us.”

“Faith tops fear,” he went on to say.

The Doughertys, who are Catholic and raised and homeschooled eight children on their homestead, gave “Six Farm Rules” to their audience which should help them start a farm.

These are the rules:

Very important to them is to get yourself a dairy cow that gives you milk, yogurt, cheese, kefir, and even feeds some of your other farm animals.

In a very affectionate and lively manner, this couple described the benefits of living on a homestead, raising one’s children with a good work ethic (making them “problem solvers”), and of eating one’s own food. They are able to produce 90% of their own food. The Doughertys (whom you can watch working on their farm here) have written a book entitled The Independent Farmstead with which they try to share all their experience of a quarter of a century with other families who wish to become more independent. As Shawn Dougherty related during his talk, there are now many young families who are actually settling in the vicinity of the Dougherty farm. These families – some of which are former students of Dougherty at the Franciscan University in Steubenville, Ohio – are now discovering this way of life and are grateful to learn from the Doughertys.

The Doughertys are so much in love with their farm and the farming way of life that they even started a project called The Healing Land, where they give classes in homesteading.

Beth Dougherty stressed also the importance of food independence for the sake of a sane life. If one grows one’s own food, she stated, one is less prone to be manipulated by politicians. The Doughertys went through the entire corona crisis on their farm unaffected. And homesteading and homeschooling, as she told LifeSite, go hand in hand.

These are only a few examples of these encouraging and inspiring talks during the two-day Homesteaders of America event in Front Royal. Make sure to check their website and sign up for next year’s event!

Amy K. Fewell, who founded the Homesteaders of America in 2016 – with a booming success since her first conference in 2017 – has a lot to say on why people should consider homesteading. In an article written for the 2022 conference booklet, she reminded her readers of the Great Depression, and she is convinced that “it will happen again.”

Fewell pointed to the decline of the GDP in our country and the increase of our national deficit, which is around 2.8 trillion dollars (while at the time of the recession of 1936, it was “only” 33.7 billion dollars). For her and her family, it was the 2009 recession that prompted them “to realize that the way we were living life wasn’t going to work if this recession happened again.” Both are now self-employed and run a homestead in Virginia. Fewell calls these steps “the best experience and moves in our life. It has enabled us to be prepared for ‘next time.’”

“Friends, when looking at the graphs and numbers, it’s time for another recession,” she continued her article. “The beauty of it, however, is that I know many of you are absolutely prepared for it.” Since starting the Homsteaders of America, she and her team have helped “hundreds of thousands of people gain the skills, mindset, and education in order to face troubled times like what may lie ahead.”

“Now is the time to prepare,” she insisted, reminding her readers that “America used to be an agrarian society,” and Amy believes that “we should get back to that society.”

“America was strong and financially sufficient. But more importantly, we were community based, not government dependent.”

It is finally also all very political, this homesteading movement, at a time where everything becomes political, even health.

As Amy Fewell showed, in a society that “now tells us we should be afraid of everything and only trust what ‘they’ shove down our throats, be the community that goes off the beaten path and says ‘I am not afraid.’”

But this movement is not only against something. It is for something. It is for building communities and helping one another. Fewell reminded her readers of the old times when farmers would help each other on the fields and then also enjoyed their fellowship and days off. “Days were long, but they were productive. It was simple. It was real. This was their everyday life, that’s it.”

In a time when people leave their homes empty all day long and family life has nearly ceased to exist, there is this yearning to return to a more natural and real life.

One participant of the conference told LifeSite in an interview that she was getting this sense of emptiness in her office work, not seeing the worth of it all. She and her mother and family went back to homesteading.

Amy Fewell – who is a mother of three – described in her article how “people don’t even like being at home. They don’t even know what ‘home’ means because they’re so disconnected from real life.” She also stressed the importance of a quiet and simple life, being able to shut down all the noise of modern life.

So homesteading is about creating again a home, Fewell wrote, adding “it’s time to make America about the ‘home’ again.” And it is clear to her that “it will be a necessity like never before.”

Therefore, let us start being real again! In times of pressure and unrest, the best way of keeping a calm head is to be prepared – to have a good community and to have a home and some ways of providing for one’s family – with trust in God and with love for one’s country.

Make sure to check out John Paul Gutschke’s video report on this great event, with interviews with many of the people mentioned in this report.