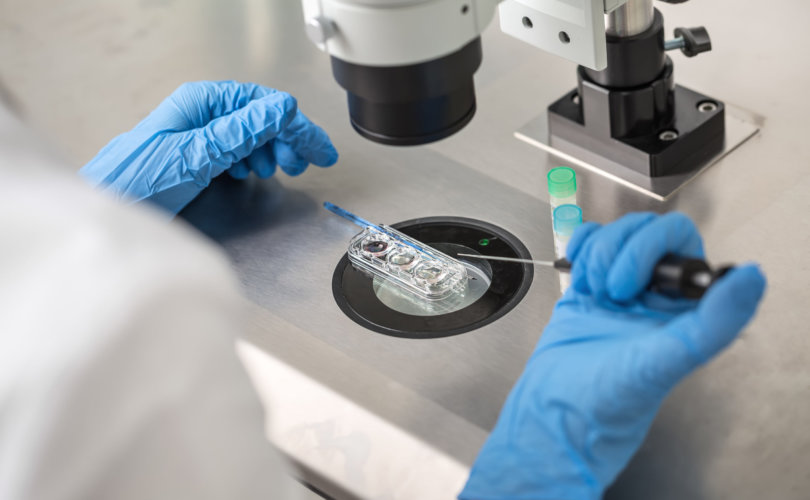 (LifeSiteNews) – On last week’s episode of the LSN podcast, I interviewed Katy Faust, author of the brilliant new book Them Before Us: Why We Need a Global Children’s Rights Movement. A key problem with our current cultural view of children, Faust points out, is that we believe adults have a right to them, and we do not consider the rights of children—most prominently, their right to their biological parents.

A recent report from The Guardian perfectly encapsulates Faust’s point. Titled “‘We are expected to be OK with not having children’: how gay parenthood through surrogacy became a battleground,” the column begins by posing a question: “In New York, a gay couple fighting to make their insurers pay for fertility treatment have found themselves in the middle of a culture war. What happens when the right to parenthood involves someone else’s body?”

To ask the question, of course, is to answer it—there is no “right to parenthood,” and homosexual couples do not have the “right” to someone else’s body. For all the progressive babble about a post-Roe “Handmaid’s Tale,” the image accompanying the report was extremely creepy—two muscular male hands clasped in front of a pregnant belly, presumably containing the child they have a right to. This child, of course, will be made motherless because the right of two homosexual men to be fathers trumps the right of a child to grow up with the love of a mother.

But the homosexual would-be “dads” and their champions at The Guardian aren’t interested in the rights or needs of the children. They’re interested in acquiring children cheaply, and they are incensed at how expensive it is for homosexual men to acquire them, something they first discovered after checking the prices through an organization called “Gay Parents to Be”:

That’s when they first became aware of the eye-watering cost of biological parenthood for [homosexual] men. […] There’s compensation for the egg donor: no less than $8,000 (£6,600). The egg-donor agency fee: $8,000-10,000. The fertility clinic’s bill (including genetic testing, blood tests, STD screening and a psychiatric evaluation for all parties, sperm testing, egg extraction, insemination, the growing, selecting, freezing and implantation of the resulting embryos): up to $70,000. And that’s if it all goes well: if no embryos are created during a cycle, or if the embryos that are don’t lead to a successful pregnancy, they would have to start again.

Then there’s the cost of a surrogate (called a “gestational carrier” when they carry embryos created from another woman’s eggs). Maggipinto and Briskin were told agency fees alone could stretch to $25,000, and the surrogates themselves should be paid a minimum of $60,000 (the advocacy group Men Having Babies says a typical fee was $38,000 in 2020; in the UK, it is illegal for surrogates to be paid, but their expenses are covered by the intended parents). Maggipinto says: “That payment doesn’t include reimbursement for things like maternity clothing; lost wages if she misses work for doctors’ appointments or is put on bed rest; transportation; childcare for her own children; [or] lodging.”

In short, the cost would be around $200,000. In the process, many pre-born children would likely die; bodily material would have to be physically extracted from others, and a woman would have to be hired as a “gestational carrier.” The child or children, of course, would be permanently separated both from their genetic mother as well as the woman who carried them and gave birth to them—but that is of no consequence. It is the feelings of the gay men that we are supposed to be concerned with.

The conclusion of this report is predictable. According to one of the homosexual men, this entire industry is obviously fueled by “discrimination,” and the policies are “the product of a time when there was a misconception, a stereotype, a prejudice against couples that were made up of two men – that they were not capable of raising children because there was no female figure in that relationship.” What is a fact, however, is that two men cannot be mothers, and children need their mothers. But the two men did what they thought they needed to—they sued:

In April, Briskin and Maggipinto filed a class action complaint with the US Equal Employment Opportunity Commission (EEOC) against the City of New York, suing Briskin’s former employers for unlawful workplace discrimination. If they win, employers and health insurers across the US will be under pressure to change their policies to give gay men the same access to fertility benefits as anyone else. But their case has become much bigger than one couple’s drive to start a family: they have become figureheads in the battle for fertility rights for all gay men.

A much-liked response to one piece about their story read: “Not having a uterus because you are male, does not make you ‘infertile’ – it makes you MALE. No one – and I do mean no one – has the right to rent another human’s body and womb to use as an incubator. That is not a human right.”

That, of course, is obviously true. As one feminist group put it on Twitter in response: “Two gay men who both attended law school filed a legal complaint against the City of New York arguing that no having access to a woman’s reproductive potential is a form of discrimination, and that they are entitled to have the City pay for a ‘surrogate.’” Delano Squires of the Heritage Foundation concurred: “No one has a ‘right’ to children they can’t naturally produce. Two men claiming they have a right to a child (through surrogacy or adoption) means someone else is obligated to give them one. The right of children should be the focus of family policy, not the desires of adults.”

That is precisely the case. Maggipinto admits that he and his “partner” are trying to create “a motherless family. I won’t tiptoe around that.” But that price—a price paid by the child—is one they are willing to pay on the child’s behalf.