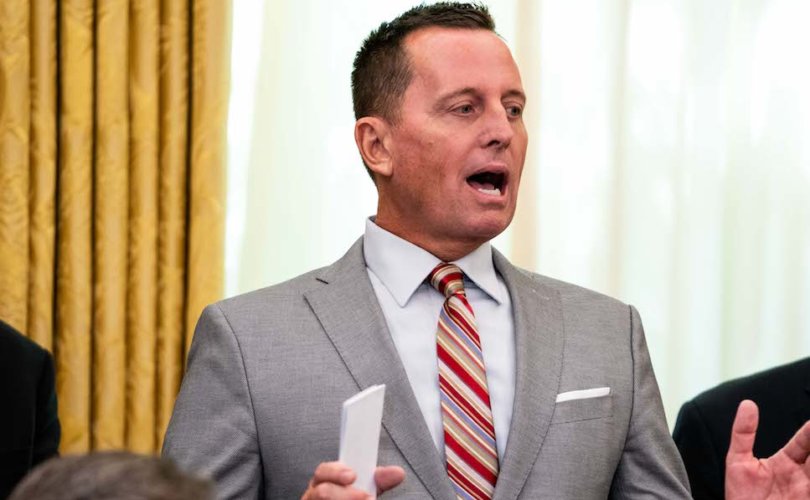 Against daunting odds, Barnette’s popularity has surged in the final stretch of the campaign before next Tuesday’s statewide elections, with recent polling showing that she has doubled her grassroots support in the last week and is now in a statistical dead heat with Trump-endorsed Dr. Mehmet Oz.

To outside observers, it appears that the Trump political machine is in panic mode over its fraying connection with the Keystone State’s conservative grassroots voters, a sign that Trump’s 2024 re-election chances are weakening.

As such, statements from former Trump administration Director of National Intelligence Richard Grenell, a homosexual pro-LGBT activist who often serves as a surrogate for the former president, convey a sense of panic and desperation.

Their support of Dr. Oz stands in stark contrast not only to the judgement of Pennsylvania’s GOP voting base, but to powerful pro-life forces now endorsing Barnette.

Pro-life Susan B. Anthony List (SBA) threw its whole-hearted support behind Barnette’s Senate bid this week, saying, “We are confident that she will be a courageous advocate for life & expose the pro-abortion extremism of the Biden-Schumer agenda.”

“We urge PA voters to vote for her on May 17!” exhorted SBA, in direct contradiction to the Trump machine.

Until he entered the race for Pennsylvania’s GOP senatorial nomination, pretty much the only clue the TV celebrity physician had given to his political affiliation was having once described himself as a moderate Republican who had been inspired by former California Governor Arnold Schwarzenegger.

Other than having publicly voiced his criticism of how governments at all levels had handled COVID-19 lockdowns, Oz’s conservative bona fides are sketchy if non-existent.

Grenell has now widened the scope of his character assassinations to include popular conservative commentator Allie Beth Stuckey.

After Grenell posted a highly edited, deceptive video montage of Barnette intended to denigrate her, Stuckey responded, “We have NO idea the context of these clips. What we do know is that Dr. Oz is a pro choice gun grabber who’s pushed the transition of children.”

We have NO idea the context of these clips. What we do know is that Dr. Oz is a pro choice gun grabber who’s pushed the transition of children. Bye https://t.co/WpDTPnwyAp

Grenell similarly attacked Barnette as “radical”  for a tweet she posted criticizing homosexuals.

She. Will. Lose. The. General.

“Ric Grenell says I am ‘reckless and radical’ for calling for context for clips he’s posting about Kathy Barnette & for opposing a candidate who has supported gender transition for kids, anti-gun regulation, and abortion,” said Stuckey.

“Make of this what you will,” she added.

Ric Grenell says I am “reckless and radical” for calling for context for clips he’s posting about @Kathy4Truth & for opposing a candidate who has supported gender transition for kids, anti-gun regulation, and abortion.

Make of this what you will. https://t.co/A03xPcVCkN

“Dr. Oz is such an embarrassing hill to die on,” suggested Stuckey early yesterday afternoon.  “Oh well. All the best to you, Ric.”

Dr. Oz is such an embarrassing hill to die on. Oh well. All the best to you, Ric. https://t.co/Ji16nWKNy1

By evening they were still going at it on social media.

“Ric still tweeting about me, calling me names, etc. because I won’t support a candidate who speaks positively about child gender transition, abortion, and taking away peoples guns,” tweeted Stuckey.

“Might have worked in the old days, but tech makes it easy for the MAGA Mafia to sniff out the nonsense.”

It looks like the attacks against Kathy Barnette this morning backfired bigly. The Oz camp pushed too hard with fake news-style smears. Dangerous tactic. Might have worked in the old days, but tech makes it easy for the MAGA Mafia to sniff out the nonsense.

“Influential Republicans in Washington and among the nationwide party elite are having a belated ‘oh s—t’ moment over the previously unimaginable prospect that Kathy Barnette could win their party’s nomination for the open Senate seat in Pennsylvania,” according to D.C. political news site Axios.

In either case, if Pennsylvania voters send Barnette to Washington in November, grassroots conservatives win, as do the nation’s unborn.