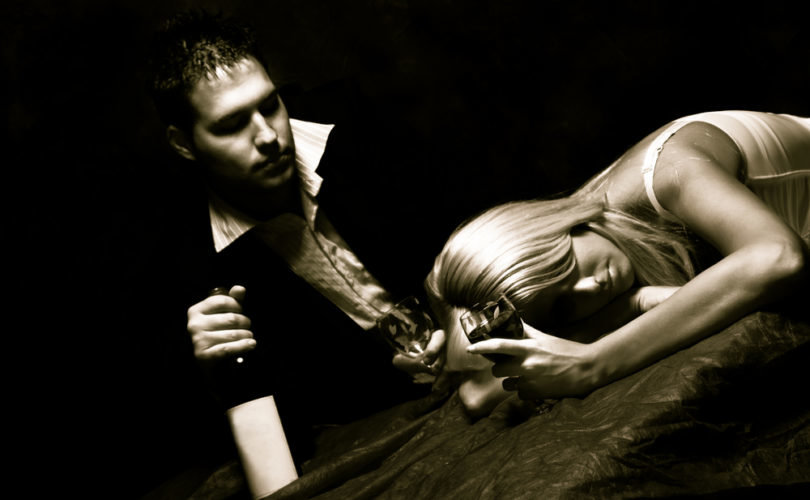 Hook-up culture and binge drinking are a phenomenally bad mix—especially when you throw the pervasive consumption of violent porn.Shutterstock

About a month ago, Rolling Stone Magazine published a savage story that made headlines across North America, detailing a brutal gang rape at a University of Virginia fraternity. Controversy erupted almost immediately, with the same tiresome lines being trumpeted: Feminists declaring that this assault was evidence of the prevalence of “rape culture,” and conservatives arguing that rape culture didn’t exist. As the UVA rape story began to unravel, feminists got rather shrill, justifiably worried that this could result in other anti-rape measures being taken less serious. Conservatives were a bit triumphant, rather ironically stating that this was another example of moral panic.

Our culture no longer has a moral code, and as we witness the destruction and collapse that were always sure to result from that, we should be sure to point out why this happened—and point to those long abandoned virtues of chastity and modesty and restraint.

That said, I generally don’t like the way conservatives deal with the rape culture issue. The tone is often too dismissive: “Okay, there’s not that many rapes. Calm down.” I love conservative commentator George Will, but hated his article on rape culture. I found Nathan Harden’s Sex and God at Yale as well Wendy Shalit’s A Return To Modesty much more even-handed and thoughtful in their approach to the campus sexual assault discussion. However, I’ve found the most recent responses to the debate fascinating.

“We don’t need ‘Jackie’ [the victim in Rolling Stone’s story] to be honest to know that campus rape is real. We have reports throughout the nation, lawsuits, complaints, and word of mouth. One study put the number of sexual assaults at 100,000 a year, which may be high, but good data are elusive for crimes that nearly always entail he said/she said and are accompanied by shame…

For centuries, western civilization recognized that women were vulnerable to sexual violence and abuse. Painstakingly, we erected a complex architecture of mores and laws to protect women from the worst kinds of men. Some of those protections now seem ridiculous — such as the notion that a lady would never permit herself to be alone with a strange man, not even in an elevator. But no one should be surprised that when the guardrails of sexual behavior were swept away in the flood of the sexual revolution, predatory men were handed a golden opportunity. A 2002 study by David Lisak of the University of Massachusetts and Paul Miller of the Brown School of Medicine found that 90 percent of rapes on college campuses are committed by serial offenders. A small percentage of men is committing most of the crimes. There is a rape culture — it’s the hook-up culture that the Left invented and celebrated as liberation. Until it’s reversed, the rapes will continue.”

Bang-on, I think. Hook-up culture and binge drinking are a phenomenally bad mix—especially when you throw the pervasive consumption of violent porn and the idea among campus males that since the Sexual Revolution enabled them to abandon any concept of chivalry, women “play the game” too. What the idea of “hook-up culture” ignores, of course, is any differences between males and females. Ironically, one prominent feminist who has been pointing this out is Camille Paglia, who once compared the trauma of rape to being beaten up, unless “she doesn’t have a proper attitude about sex.” Paglia’s analysis of the campus situation in TIME recently was markedly different:

“Current educational codes, tracking liberal-Left, are perpetuating illusions about sex and gender. The basic Leftist premise, descending from Marxism, is that all problems in human life stem from an unjust society and that corrections and fine-tunings of that social mechanism will eventually bring utopia. Progressives have unquestioned faith in the perfectibility of mankind.

The horrors and atrocities of history have been edited out of primary and secondary education except where they can be blamed on racism, sexism, and imperialism — toxins embedded in oppressive outside structures that must be smashed and remade. But the real problem resides in human nature, which religion as well as great art sees as eternally torn by a war between the forces of darkness and light.”

Paglia, too, hits on something essential: The secularists have tried to ban the very idea of evil, and instead have found them struggling with manifestations of evil that past generations never had to deal with. They banned all sexual moral codes as antiquated and repressive, and then discovered that those codes served a very essential purpose. Now, they’re attempting to re-impose codes as fast as they can—but instead of it being the built-in idea that men should treat women with respect, and that sex is a beautiful and intimate human experience created for a very specific context, they have to appeal to the reductionist and lack-lustre idea of “consent” as the new standard by which to judge behavior, no matter how repulsive.

In The Weekly Standard, Heather MacDonald tackles that very idea:

Sexual liberation is having a nervous breakdown on college campuses. Conservatives should be cheering on its collapse; instead they sometimes sound as if they want to administer the victim smelling salts…

The ultimate result of the feminists’ crusade may be the same as if they were explicitly calling for a return to sexual modesty: a sharp decrease in casual, drunken sex. There is no downside to this development.

Let us recall the norms which the sexual revolution contemptuously swept away in the 1960s. Males and females were assumed on average to have different needs regarding sex: The omnivorous male sex drive would leap at all available targets, whereas females were more selective, associating sex with love and commitment. The male was expected to channel his desire for sex through the rituals of courtship and a proposal of marriage. A high premium was placed on female chastity and great significance accorded its loss; males, by contrast, were given a virtual free pass to play the sexual field to the extent that they could find or purchase a willing partner. The default setting for premarital sex was “no,” at least for females. Girls could opt out of that default—and many did. But placing the default at “no” meant that a female didn’t have to justify her decision not to have sex with particular reasons each time a male importuned her; individual sexual restraint was backed up by collective values.

And now, campuses are returning to authority-oversight of campus sexual activity, albeit in a flimsy and often ridiculous way. But I think that conservatives should take this opportunity to point out that those who warned against the Sexual Revolution knew this would happen. Instead of dismissing the very idea of rape culture, we should come to terms with the fact that there is a very real possibility that such a thing is developing, the result of our cultural commitment to abandon all restraint—especially on university campuses. University is now about “being true to yourself,” not being true to others, or putting the good of others above yourself, or sacrificing any of your desires. Is it honestly surprising to anyone that sexually carnivorous students, fueled by alcohol and set free by hook-up culture, might engage in sexually predatory behavior?

Our culture no longer has a moral code, and as we witness the destruction and collapse that were always sure to result from that, we should be sure to point out why this happened—and point to those long abandoned virtues of chastity and modesty and restraint. After all, if we dusted them off and began to create more than a culture of consented-to-casual-fluid-swaps, but a culture of respect and self-sacrificing love and the beauty that results from that—then we might finally see something that could be referred to as “progress.”