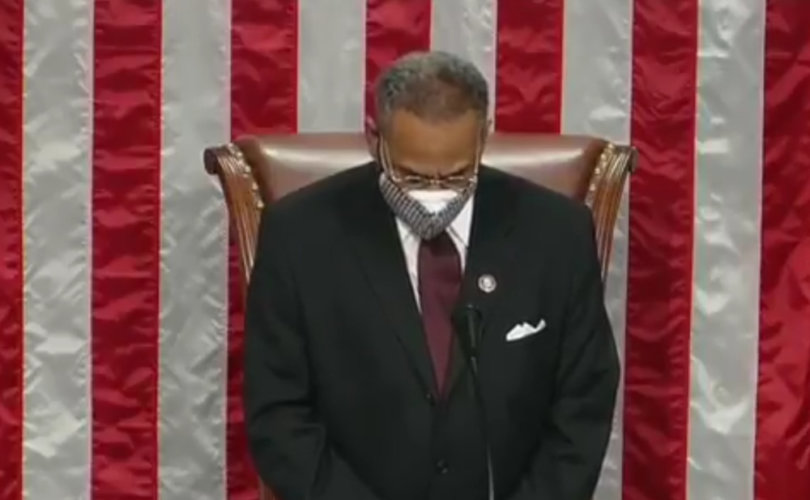 WASHINGTON, D.C., January 4, 2021 (LifeSiteNews) — It’s now clear that U.S. House Democrat leadership’s descent into depravity is complete. According to newly revealed House rules for the just-begun 117th Congress, terms such as “father, daughter, mother, and son” as well as gendered pronouns are banned.

And as if to make the depravity of their obsession with gender inclusiveness abundantly clear, during yesterday’s first session of the new year Rep. Emanuel Cleaver (D-MO) ended the opening prayer by declaring “Amen, and Awoman.”

To the ancient Biblical Hebrew word “Amen,” which means “May it be so,” Cleaver added a made-up nonsensical word, because “Amen” sounds to Democrats like an offensive reference to males.

A prayer opening the 117th Congress concluded, “Amen and a woman.”

“Amen” translates to “so be it.” pic.twitter.com/SIGBtgLk5v

All this cannot be written off as the silliness of political correctness within the Democratic Party. It’s not silly at all; it’s diabolical.

A coup against reality

What is going on?

This is a pivotal moment in the history of the United States, one which reveals the determination of many in leadership to reject reality and embrace delusion in the name of totalitarian power.

We are witnessing a coup against reality — against science and nature, and, above all, truth — as liberal elites seek to establish and enforce a false construction of reality, an ideological pseudo-reality.

The events of this past weekend create a public record documenting the transformation of liberal leadership into cult leadership.

“It must be observed that people who accept pseudo-realities as though they are ‘real’ are no longer normal people,” wrote Dr. James Lindsay in “Psychopathy and the Origins of Totalitarianism,” presciently published just a few days before the new Congress began. Lindsay’s work draws heavily upon Catholic philosopher Josef Pieper’s “Abuse of Language, Abuse of Power” published five decades ago.

While Lindsay addressed no specific social issue or personalities in his excellent essay, it sheds bright light on recent developments in the newly-seated U.S. House of Representatives led by Democrats.

“The ultimate purpose of creating a pseudo-reality is power,” said Lindsay.

— Article continues below Petition —
PETITION: Puberty is not a disease! Ban transgender drugs and surgeries for minors.
Show Petition Text
6690 have signed the petition.
Let's get to 7500!
Thank you for signing this petition!
Add your signature:
Show Petition Text

“Pseudo-realities, being false and unreal, will always generate tragedy and evil on a scale that is at least proportional to the reach of their grip on power — which is their chief interest — whether social, cultural, economic, political, or (particularly) a combination of several or all of these,” he warned.

Such false realities “require power, coercion, manipulation, and eventually force to keep them in place. Thus, they are the natural playground of psychopaths, and they are enabled by cowards and rationalizers,” wrote Lindsay.

“Most importantly, pseudo-realities do not attempt to describe reality as it is but rather as it ‘should be,’ as determined by the relatively small fraction of the population who cannot bear living in reality unless it is bent to enable their own psychopathologies, which will be projected upon their enemies, which means all normal people.

Democrats’ control over the meaning and usage of words in the 117th Congress is an abuse of language which will enable abuse of power. The Democrats are employing “discourse engineering” in order to achieve their larger goal of “social engineering.”

“These manipulations are therefore attractive to people with strong inclinations to control other people or to take power, particularly when they are of moderately high intelligence, relatively well-off, and linguistically savvy (while, perhaps, lacking in other more concretely valuable skills),” said Lindsay.

“The real alchemy of the pseudo-realist ideological project” is, according to Lindsay, “turning normal, mostly healthy people into psychologically, emotionally, and spiritually broken water-carriers who can no longer cope adequately with the features of reality and thus must prefer the pseudo-reality that was built to receive them — and, more importantly, to make strategic use of them.”

“The true alchemy of the pseudo-realist program; it transforms normal, moral people into immoral agents who must perpetrate evil to feel good and perceive as evil those who do good,” he reiterated.

Evil: The new ‘morality’ is a perversion of morality

The “paramorality” promoted in this pseudo-reality of gender politics “will always be repressive and totalitarian,” said Lindsay. “Dissent and doubt cannot be tolerated, and disagreement must be cordoned off into a moral pit that adherents dare not approach.”

Paramorality “is a particular type of perversion of morality that can feel more moral than moral [sic] but is, in fact, evil,” he said. It is “the domain of psychopathy, which, when inflicted on the normal masses, is evil.”

The goal of the paramorality will always arise from and exist to favor people with particular psychopathologies who cannot otherwise cope with the discomforts of reality. This implies that an ideological pseudo-reality’s most successful means of gaining strength is through appealing to the perceived victimhood of those people and whipping up the grievances of those who have suffered similar injustices with more dignity.

When widely empowered, this should be treated as another symptom of impending civilizational calamity and a need to identify and reject the pseudo-reality manipulating these feelings.

“These people, as many have learned the hard way throughout history, are the otherwise good people who are capable of perpetrating genocides,” observed Lindsay.

In the end, the route that leaders of the Democratic Party have chosen will lead to “a complete reversal of sanity, and the conversion of normal to ideologically psychopathic,” and all of this will have been accomplished under the banner of the sexual revolution.

Will this be a turning point in the sexual revolution?

Liberal elites, led by five members of the U.S. Supreme Court, dealt a substantial blow to reality, as well as civil and religious liberty, in 2015 when they altered the immutable definition of marriage to include genderless, anti-complementary “marriage.” More recently they have “expanded” the definition of “sex” as a matter of civil rights to include “transgendered” individuals.

Something is desperately wrong when the supposed brightest legal minds in the nation determine that sodomy constitutes consummation of marriage and genitalia are no longer indicative of gender. Or where a child, whether unborn or recently born, is not considered a human being, but is something to be snuffed out and disposed of in the trash.

Sexual revolutionaries have succeeded in their quest against human dignity because a blanket of dullness, darkness and depravity has been settling over our nation and the rest of the “civilized” world for several decades.

Our only hope is to refute the Democrats’ embrace of unreality and reject it. Refuse to be coerced and resist participating in their distorted view of reality before their psychopathy attains totalitarian power.

May the corrupt prayerful declaration “Awoman,” uttered unselfconsciously in the halls of Congress, trivializing both God and humanity, be a turning point where Americans resolve to reject unreality and delusion and insist that our legislative leaders return to reality.

Use this link to read all of Dr. James Lindsay’s excellent essay: Psychopathy and the Origins of Totalitarianism