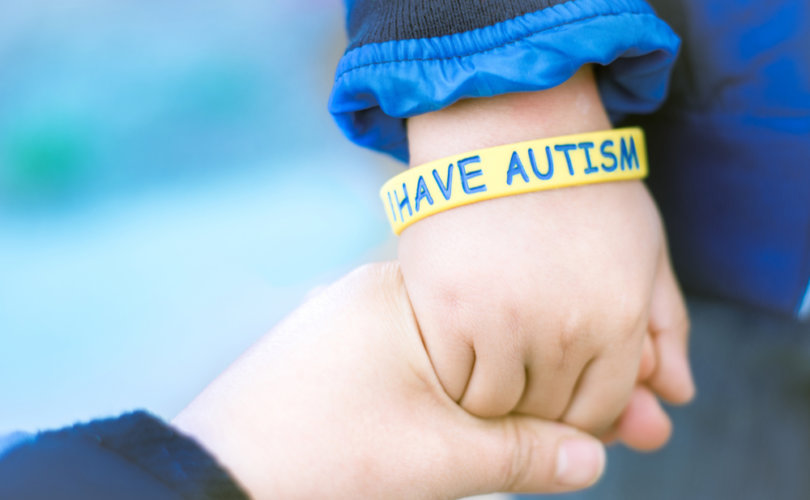 March 15, 2021 (LifeSiteNews) — Every once in a while a story comes along that turns everything we know about something on its head. It throws a heap of understandable (but dead-wrong) assumptions and a vast library of science — thousands of psychology and medical papers — on a burn pile, and it reveals to us something utterly astonishing.

Underestimated, the book by J.B. Handley and his son Jamison, to be released by Skyhorse Publishing on March 23, is one such watershed. It is a true story that will eventually change the world of autism; the research, the medicine, the therapies, the day-to-day lives of many families — but especially, hopefully, the lives of millions of autistic children and adults. In doing so, it is not an overstatement to say that this book may just change the world.

The hero of the story is Jamison (Jamie) — a 17-year-old nonverbal autist who is so severely affected by his disability that he’s been relegated to a “life skills” class where the focus is on teaching him to do his laundry and use a debit card and keeping him from injuring himself. His life is a tragedy to all the world, except for a few.

Jamie’s father, J.B., is one of those few. Jamie is his tragedy, and he is bent on finding his boy inside the head-banging, “stimming” teen who seems absent most of the time, vacantly tearing leaves into small bits in peaceful moments and wildly biting his arm and wailing at times for reasons that no one understands.

Stanford-educated J.B., co-founder of a leading private equity firm, also founded Generation Rescue, a group aimed at helping autistic children recover, 16 years ago. The book begins at the end of 2019, when J.B. seems to have exhausted all of the options for recovering Jamie.

J.B. knows the feeling of being a hope junkie — trying every possible treatment that promises to improve his son’s health and daring to believe that each might just be the thing that brings some rare magical healing. He knows the hangover of letdown that follows, too. Some of these therapies — from vitamins and hyperbaric oxygen dives to fecal transplants — may have helped his son physically, but not neurologically, so J.B. is worried about what life will be like for Jamie when he is gone. Resignation has crept in and, painful as it is, it’s more tolerable than another hope hangover. “At least Jamie has the kind of autism where he doesn’t know he has autism,” J.B. reasons. At least he seems oblivious.

The book must be read to appreciate the miracle that follows. I say “miracle,” even though there is a natural explanation for everything that occurs in the story — and, hopefully, millions of such miracles await — but there is a powerful though subtle faith message in this book. The first time J.B. ever prayed to God was when Jamie was a toddler after he and his wife found an online diagnostic test that pretty much confirmed Jamie’s autism before doctors did. “I viewed the prayer at the time as just a hedge,” he writes.

He recalls a moment, after he’d been sending up those prayers regularly for 16 years or so, sitting in a hot tub with Jamie after a week that included the hellish episode of rushing to the teen’s school where he had been banging his head on the ground. He prayed again, though he described his “relationship with the man upstairs [as] actually pretty strained.” He had no idea what was about to unfold, however.

What happened next is what you might hear a preacher call a “God-sized” miracle — unexpected, incredible and with good fruits to flow from it for a long time to come, I expect. It’s all of this despite the fact that Jamie wasn’t cured of his autism and his brain is still damaged.

Two weeks after sending up his silent prayer in the hot tub, J.B. heard about a little-known low-tech therapy called Spelling to Communicate (S2C) that teaches nonverbal autists to communicate by spelling their words using letterboards. It was clear Jamie could “speak” from the first session of S2C. Within a few months he was unlocked from a 17-year sentence in what he called a “prison of silence” and could communicate his thoughts for the first time in his life. He revealed himself to be not just not cognitively impaired, but a profoundly intelligent, insightful soul with wisdom far beyond his years and an uncommon sensitivity to the needs of others and a desire to advocate for them.

It turns out that Jamie, like perhaps millions of other children and adults who have limited verbal skills and seem to be cognitively and intellectually impaired, are actually only unable to communicate because their fine motor skills are so severely damaged. “It’s not about whether there is brain damage,” J.B. told LifeSite. “It’s about where it is.”

All communication from speaking to typing, even eye tracking, is based on fine motor skills. By teaching them a means to use their intact gross motor skills — large muscle movements — to spell to communicate, these autistic people are free to reveal their astonishing abilities.

Just as blind people develop super-acute hearing ability, it seems that at least some of these nonverbal autists have developed other perceptive abilities to an extraordinary degree. As well, their portrayal in medicine as being socially withdrawn and distant is mistaken.

Jamie now meets weekly with a group of young men who have recently “broken out” of their prisons of silence. Underestimated shares the words straight from the hearts of six of them, and their comments on culture, art, and life are often poetic.

“We are not aliens. We have the brain, heart, dreams and desires of a neurotypical person,” writes 20-year-old Vince from Philadelphia, PA. “The main difference lies in the way we process information and express our emotions. Upon meeting us you must always assume intellect. We may not appear to be your definition of smart, but there is so much more to us than you may realize. Never underestimate a nonverbal person, we are fighters.”

“Respect only comes when others view you as having worth,” writes 19-year-old Ethan from Portland, Oregon via a letterboard. “Humans should bestow kindness in places they don’t often travel. I shouldn’t have to please you to get your respect.”

“This week I learned what a black hole is; I learned about the event horizon,” Ethan says. “One can get into the event horizon but one can never get out. It is necessary to travel faster than the speed of light to escape. No one knows what it is to be beyond this border.”

“I do. It is where I lived before I used a board to spell. I hereby leverage my words against your expectations of me.”

Jamie is determined to learn to speak and to spread the message of S2C to everyone who can be freed by it. “I really want others to know that they can do this,” he spells to his dad. “I think my proudest accomplishment will be the people I inspire.”

It turns out Jamie has incredible mathematical aptitude and wants to go to college to study the neuroscience of brain and motor connection.

“Doesn’t that still just shake you, J.B, to hear yourself say: ‘Jamie plans to go to college?’” I ask him.

“It does every day,” he replies. “Every day is just better than the one before. Everything is just unicorns and rainbows and I really mean that. Every night I just thank God. Gratitude is the primary feeling.”

This realization of the cognitive potential in nonverbal autism basically shreds 60 years or so of medical research into autism, along with lots of teaching therapies and manuals that have mistaken fine motor skill deficit for cognitive impairment. The book gets into the surprising reaction from some in the autism community who you’d think would be jumping up and down in celebration, but aren’t.

Jamie’s story is sure to revolutionize the lives of many children and adults who have been locked in silence, but it is for those with no connection to the autism world, too. Without saying so, it raises questions about what else we underestimate. What about other disabled people? How do we treat them when we encounter them? What about ourselves? How much do we underestimate our own capacity to learn and adapt, our strength and the impact each of our encounters with others has on them and how far it ripples out? How often do we underestimate our God and think He is gone when He is only silent?

It’s a beautiful thing that Jamie was unlocked just as the world was going into COVID lockdown, and that so many of these kids began breaking out of their cells of silence when the world was going into an unprecedented prison. A sign of grace, perhaps. God is still working, selecting his warriors for greatness from the most unexpected of places, as usual.

I cried while reading this book; it has the feel of a living Hans Christian Andersen fairy tale. The curse on the land is broken, the dead and frozen things have awakened, and it is spring. Impossible hopes are fulfilled and joy reigns.

If you have a nonverbal autistic child you may just find yourself bawling — and hoping. The message from JB and Jamie is clear: Dare to hope, dare to try, and never underestimate what is possible.