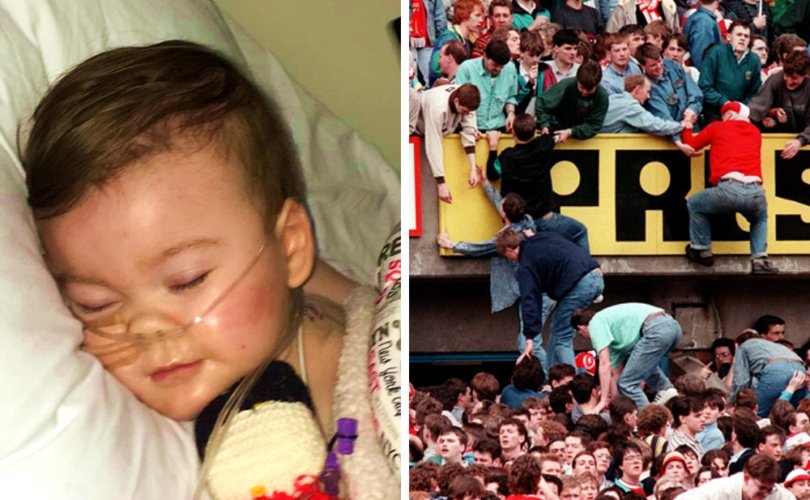 LIVERPOOL, May 4, 2018 (LifeSiteNews) – The court-sanction killing of UK toddler Alfie Evans by Alder Hey hospital in Liverpool can be linked back to the Hillsborough football disaster of 1989 that claimed 96 lives.

One of the injured was an 18-year-old boy named Anthony Bland.

It is because of Bland’s injuries that euthanasia — and thus the cessation of life-supporting treatment to Alfie Evans — entered into English law in 1993. It was the first time in English history that a court was asked to consider a case in which the petitioner’s intent was to cause an innocent person’s death.

The courts allowed Bland — who was not suffering nor dying but simply in a coma, what doctors called a “vegetative state” —  to be essentially killed by hospital staff, setting a legal precedent that ultimatley led to the untimely death of Alfie Evans.

On April 15, 1989, Tony Bland went with friends to the Hillsborough football ground for the semi-final game between Liverpool and Nottingham Forest. Police errors in directing the movements of the massive crowds led to the fatal human crush. Tony suffered two crushed ribs and two punctured lungs, which stopped oxygen from getting to his brain. The boy fell into what doctors called a “persistent vegetative state,” and his cerebral cortex eventually turned into a “watery mass.”

Tony remained in a coma at the National Health Service’s Airedale general hospital for over three years, never responding to the family members at his bedside. According to court documents, he couldn’t see, hear, or feel. His brainstem still functioned: he had a heartbeat and a working digestion. He could breathe. However, Tony was fed and hydrated by tubes, required antibiotics to ward off infections caused by his catheter, and needed 24-hour care. Doctors soon lost hope that he would ever recover consciousness.

They expected the boy to survive for some years in this state–but only if he were fed, hydrated and healed of infections.

Four months after the disaster, with Tony’s parents’ permission, Dr. J.G. Howe, consulted a local coroner about ending the boy’s life by withdrawing treatment. Howe was shocked when the coroner told him he could be charged with murder if he did. Police then visited Howe to confirm this.

In response, the Airedale General Hospital applied to an English High Court of Justice for permission to withdraw life support, arguing that continued treatment was not in Tony’s best interests. In this they had the support of both Dr. Howe and Tony’s parents.

The High Court and Court of Appeal agree to withdrawal

On November 19, 1992, the High Court determined that the hospital could lawfully withdraw Tony’s life-support, but the boy’s legal guardian, appointed because Tony could not speak for himself, appealed. On December 9, the Appeals Court upheld the High Court’s decision. Citing the “dignity” of Bland’s now-inevitable death,  it ruled as follows:

“that despite the inability of the defendant to consent thereto, the plaintiff and the responsible attending physicians: (1) may lawfully discontinue all life-sustaining treatment and medical supportive measures designed to keep the defendant alive in his existing persistent vegetative state including the termination of ventilation, nutrition, and hydration by artificial means; and (2) may lawfully discontinue and thereafter need not furnish medical treatment to the defendant except for the sole purpose of enabling him to end his life and die peacefully with the greatest dignity and the least of pain suffering and distress …”

Lord Justice Keith: Life in a persistent vegetative state not a benefit

The matter was then brought before the court of the House of Lords. There five Lord Justices determined “whether artificial feeding and antibiotic drugs may lawfully be withheld from an insensate patient with no hope of recovery when it is known that if that is done the patient will shortly thereafter die.”

On February 4, 1993, the judges decided that, yes, they could be withheld.

Their reason was that Tony’s life was simply not worth living, in their estimation: his consciousness, “the essential feature of individual personality”, was gone and continued care was of no “benefit” to him. The judges saw no benefit to remaining alive if this meant being in a permanent vegetative state.

Lord Keith stated that “the object of medical treatment and care is to benefit the patient” and that medical evidence indicated that extended medical care would not benefit Tony Bland.  Legally, a doctor had the duty to continue care for a patient only if it were beneficial.

“… a medical practitioner is under no duty to continue to treat such a patient where a large body of informed and responsible medical opinion is to the effect that no benefit at all would be conferred by continuance,” he wrote.

The continuance of life in a vegetative state, Keith thought, was not a benefit.

“Existence in a vegetative state with no prospect of recovery is by that opinion regarded as not being a benefit, and that, if not unarguably correct, at least forms a proper basis for the decision to discontinue treatment and care,” Keith stated.

Keith believed that it would be  “a matter of complete indifference”  to a person who had permanently lost cognitive capacity whether he lived or died.  The judge also stated that  “the principle of the sanctity of life” was not “absolute”. For example, nobody may force life-saving treatment on a person who refused it.

While upholding that directly shortening the life of a terminally ill person was illegal, Keith said removing care from Tony Bland would be lawful:

“In my judgment… it is lawful to cease to give medical treatment and care to a P.V.S.[persistent vegetative state] patient who has been in that state for over three years, considering that to do so involves invasive manipulation of the patient's body to which he has not consented and which confers no benefit upon him.”

Keith said that whether or not continued treatment and care for such a patient is a benefit to him is for his doctors to decide.

Lord Justice Goff: “Sanctity of human life must yield” to other principles

Lord Goff of Chieveley also said the principle of the sanctity of human life was not absolute.  In his judgement, there was also “no absolute rule” that life should be prolonged by medical care. An “adult patient of sound mind” could refuse it, for example.

Goff thought that an absolute obligation upon doctors to prolong a comatose patient’s life could result in treatment  becoming “cruel”.  It would also be against his dignity. Quoting from an American legal decision, Goff said:

Like Keith, Goff drew a distinction between directly ending a life and merely ceasing to provide care. Removing life-support was not an act, he said,  but “an omission”:

“The omission is not a breach of duty by the doctor,” he said, “because he is not obliged to continue in a hopeless case.”

Lord Goff decided that prolonging Bland’s life was not in his best interests because there was no prospect of any improvement in his condition.  And because Bland couldn’t feel pain, he would not suffer from starving to death when his feeding tube was removed:

“.. It is is clear from the evidence that no … pain or distress will be suffered by Anthony who can feel nothing at all,” Goff ruled.

Tony Bland’s feeding tube was removed, and he died on March 3, 1993. At an inquest into his death, Tony’s death was ruled “accidental” due to the “traumatic asphyxia” he had suffered nearly four years before. The Hillsborough disaster, not the court decision, nor the cessation of life support, was the official cause of his death.

But a pro-life activist, Father James Morrow, who had volunteered to care for the young man called Tony’s death a “murder.” The Scottish Catholic priest tried to have Dr. Howe charged with the crime. After magistrates dismissed his first attempt, Marrow was determined to try again.

“Dr Howe is the culprit and we must have a conviction in this matter,” he told media in 1993. Morrow said he was pursuing the case “in an attempt to prevent future comatose, disabled and elderly patients from sharing the fate of Tony Bland.”

Morrow was ultimately unsuccessful, as he was again in 1996, when he tried to save the life of Scotland’s first victim of euthanasia, Janet Johnston. Fr. Morrow died in 2010  after he suffered a stroke.

On April 26, 2016, during a second inquest, the verdict that Tony Bland’s death was “accidental” was changed to “unlawful killing.” This had nothing to do with the removal of his life-support: a charge of manslaughter was to be laid upon police on duty at the Hillsborough football field on the day of the disaster. Bland has gone into history as the 96th fatality of the Hillsborough disaster

But Tony Bland was not Hillsborough’s last fatality. Because his hospital succeeded in bringing his damaged life to a quicker end, everyone in England whose life support is removed without his or her consent could be considered, at one remove, a victim of the Hillsborough disaster.

And that would include little Alfie Evans.