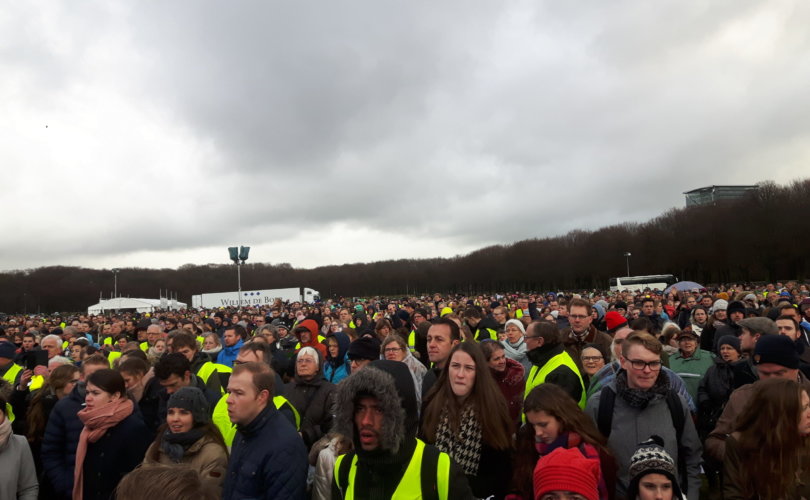 THE HAGUE, Netherlands, December 11, 2017 (LifeSiteNews) – The wind was cold and biting and the faces were red, but it was a heart-warming sight: 15,000 Dutch men, women, and children packed Malieveld Square in the center of The Hague on December 9 to protest abortion and promote compassionate options at the 25th Silent March for Life.

I arrived around 11 AM and the crowds were already filling up the square, pouring off buses and from the trains station as piano music filtered across the grass. In front of the stage, a little girl with Down Syndrome smiled enormously while flapping a sign reading “Mars Voor Het Leven” (March for Life). Other signs began popping up too—“We Love Them Both” and “We Are the Pro-Life Generation” were in English, and of course Dutch signs with slogans such as “Abortus Verscheurt” (roughly translated, “Abortion Destroys”) were present as well. One featured a beaming little girl with Down Syndrome and the slogan: “Ben ik nog welkom?” (Am I Still Welcome?)

It was over two hours before the stream of people slowed to a trickle and Kees van Helden, the leader of the national organization Cry for Life, came out on the stage to open the March with prayer and the singing of Psalm 68:10. We speak in high schools across the nation, van Helden told the crowd, and we always present a scenario to find out what people will say: If you are young and facing an unplanned pregnancy, what advice will you get? In both public and Christian schools, the response is almost always the same: abortion. The work of Cry for Life and the Dutch pro-life movement, said van Helden, is to present other options and make them mainstream.

The Dutch pro-life movement has been presented with the perfect opportunity to emphasize these other options, as well. As I reported earlier, four of the seven Dutch abortion clinics have been recently shut down due to fraud allegations totalling over fifteen million euros. Cry for Life and other organizations have been working hard to reach those women who are seeking abortions at overbooked and frenetically busy clinics, presenting them with other options. Many lives have already been saved.

This opportunity, the next speaker told the crowd, must not be wasted. Kees van der Staaij of De Staatkundig Gereformeerde Partij (SGP), the political party representing Reformed Christians in the Netherlands, noted that the clinic shutdowns have women asking the question: With the abortion clinics closed, where can we go? And that provides the pro-life movement with the opportunity to answer that question with love for both the women and child, with compassionate options that deeply respect both lives, and with any kind of assistance those two precious lives might need.

The March for Life, said van der Staaij, is always a solemn event. Pre-born children across the Netherlands are still being killed in the womb every day. Legislatively, the SGP would like to see a mandatory waiting period with counselling for women that explicitly lays out alternatives to abortion. But this March also feels more hopeful, because clinics—clinics that “seemed untouchable are shutting down.” Van der Staaij ticked them off on his fingers:

You call the clinic in Houten? Closed!

You call the clinic in Amsterdam? Closed!

You call the clinic in Maastricht? Closed!

It was, as advertised, a largely silent event where the crowd was concerned—the Dutch sing Psalms and applaud the speakers, but there was none of the loud chanting or cheering that defines the marches in Canada and the United States. I found that it lent an appropriate solemnity to the event. Life must be celebrated, but the March for Life is only necessary because the killing of pre-born children continues unabated—in the Netherlands, since legalization in 1984. This fact was mentioned by several of the speakers and quite obviously in the forefront of the marchers’ minds.

Peter Smith, a UN lobbyist who works for the Transatlantic Council and has represented the International Right to Life Federation, spoke next. Smith, a veteran of 140 such meetings, detailed the overt hostility of the United Nations to the human rights of pre-born children—rights which are confirmed by many UN documents. Specifically, Smith noted, the UN Declaration of the Rights of the Child affirms that, “the child, by reason of his physical and mental immaturity, needs special safeguards and care, including appropriate legal protection, before as well as after birth.”

Gert-Jan Segers, a Member of Parliament for the ChristenUnie (Christian Union) Party and the chairman of the Lower House for his party since November of 2015, also took the stage. The CU is a member of the Dutch government coalition, and Segers is one of those using his political position to do everything he can to promote life-affirming government policies. It is people like his niece Hannah, who has Down Syndrome, and his 76-year-old mother, who inspire Segers to do his essential work.

While pro-euthanasia forces are attempting to pass “end-of-life” legislation that allows people of a certain age to opt for death if they decide they are “tired of life,” Segers is championing an “Aging with Dignity” manifesto that seeks to create life-affirming care for the lonely and the elderly. As he stepped off the stage, I asked him a few questions, and he became passionate and animated. It is palliative care and genuine compassion that are necessary to combat euthanasia culture, he told me—and they have already secured 180 million euros from the Dutch government to dedicate to such programs. Euthanasia may remain legal, but pro-life politicians like Segers are seeking to attack the demand for it.

There were several other speakers—pro-life leader Alex Van Vuuren, a number of students who had participated in a pro-life art contest, and a young mother with her beautiful child who decided not to go through with her planned abortion after pro-lifers presented her with other options. Babies are being saved, Kees van Helden told the crowd as they began to march, and it is up to every Dutch man and woman who loves and values life to get involved in this essential work.

The crowd was so large it stretched around the square, up the street, and when the beginning of the March began to arrive back in front of the stage, there were still people who had not begun to march. Most Reformed denominations were represented by pastors and consistory members—to use the English names–the Netherlands Reformed, the Free Reformed, the Old Reformed, and at least half a dozen others were all present. Catholics, evangelicals, and Pentecostals were also well-represented. There was a single abortion activist protesting the march, marching up and down as the crowd filed past her and squawking tired slogans.

It was a beautiful and encouraging day. To see thousands of people out in the icy wind and cold weather to declare their opposition to abortion and their support for compassionate and loving options reminded me once again that in every nation where a Culture of Death has taken root, there are still many dissidents who fight against that culture and rob it, day in and day out, of victims. In 2017 alone, four clinics across the Netherlands have closed down, and pro-lifers have been there to offer desperate women life-affirming alternatives. It was a March reflective of Psalm 139, which the crowd sang in Dutch together, thousands of voices echoing across the square:

If ascend up into heaven, thou art there: if I make my bed in hell, behold, thou art there. If I take the wings of the morning, and dwell in the uttermost parts of the sea; Even there shall thy hand lead me, and thy right hand shall hold me. If I say, Surely the darkness shall cover me; even the night shall be light about me. Yea, the darkness hideth not from thee; but the night shineth as the day: the darkness and the light are both alike to thee. For thou hast possessed my reins: thou hast covered me in my mother's womb. I will praise thee; for I am fearfully and wonderfully made: marvellous are thy works; and that my soul knoweth right well.