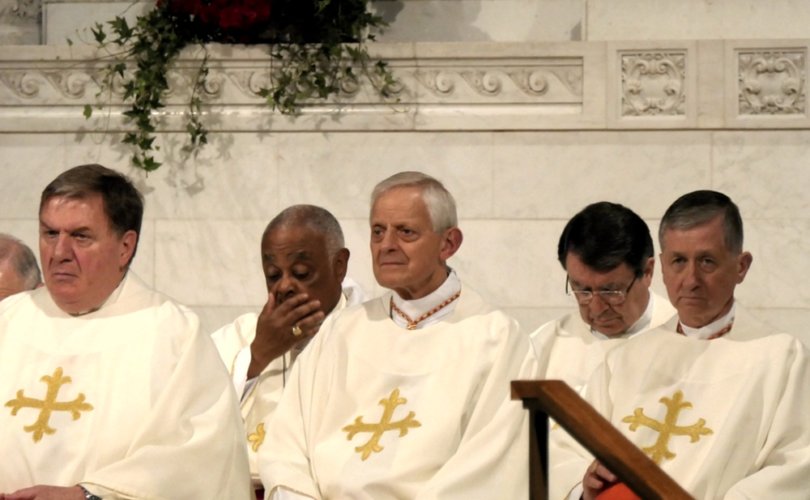 August 1, 2018, (LifeSiteNews) – The hierarchy of the Catholic Church in the United States has lost its way and is now mired in a widespread, diabolical scandal that reaches far back into the last century.  The tentacles of this scandal reach from chanceries to seminaries to parishes and schools, anywhere innocent, unsuspecting young Catholic men can be preyed upon.

Although Catholic prelates largely created their ugly gay predation problem on their own — in secrecy and in darkness; through arrogance, pride and narcissism; by keeping their own sinful counsel within an odd, perverse brotherhood while pretending to be holy, wise and fraternal — they will not find a way out of the problem on their own.

Their failure to hold themselves accountable after the Dallas Charter is now their infamous legacy, for their sin is not merely personal. Their sin has destroyed many lives, derailed many priestly callings, and knocked the Church in America off her feet.

The laity of the United States are both appalled and furious at their apparently unwholesome brotherhood.

The complicity of the bishops — turning a blind eye to sexual sin within their elite fraternity — shows that in a pharisaic manner they hold themselves to a different standard than every other member of the Body of Christ.  Or maybe they rarely hold anyone to any public standard of sexual behavior, because they don’t often speak about such sins.

At this moment in history, the laity led by Christ their king and the Holy Spirit are the episcopacy’s only hope to find its way to true repentance and redemption, health and vitality.

If the bishops attempt to dig themselves out on their own, they will only doom themselves and cause more damage to the Church.

“This has to be a laity-led solution,” says canon lawyer Marjorie Murphy Campbell.  “The credibility at the episcopal level is shot.”

“Bishops and priests need to be encouraged to move in the direction of faith and conviction,” asserts Reverend Peter M.J. Stravinskas.  “The laity need to 'step up' and take a mature role in the life of the Church, cognizant of the fact that no reform in the history of the Church has ever taken place from the top down; it has always been from the bottom up.”

This is true now more than ever.

Left to their own devices, our hierarchy will entrench their position

The experts at the highest levels of the Roman Catholic Church have been busy doing damage control.  Some, like McCarrick’s former close colleague, Cardinal Farrell — recently appointed by Pope Francis to head the Vatican’s Dicastery for Laity, Family and Life — deny they ever knew anything about McCarrick, yet as chancellor of Washington, DC, Farrell shared a house with McCarrick for six years.  Farrell’s denials are not credible.

Other prelates and pundits are calling for new studies, new policies and procedures.

None of their political posturing or bureaucratic maneuvering will address their ghastly problem, namely that the deadly cancer of homosexuality has infested and corrupted much of the clergy. They are simply doing what their own very protective human instincts — and most likely their lawyers — are telling them to do: deflect, stall, and avoid.

In so doing they are employing a tactic familiar to Washington DC observers:  If a topic is toxic and congressmen don’t want to deal with it, they create a “blue ribbon panel” to “study the situation” and “make recommendations.”

Empanelling such a committee creates the impression that something is being achieved when in actuality, nothing is.  It’s simply a move to get the public off hapless lawmakers’ backs while giving the controversy time to fade away.  In fact, all the proposals coming from the top guarantee that nothing will change, and the gay infestation — sin — will persist.

The Catholic Church should avoid going down any such an unserious, unproductive path.

What would constitute a serious response?

First, our bishops need to stop listening to their legal staff and public relations firms, whose advice will only serve to prolong the bishops’ dire problem.

Second, the USCCB should radically change its plans for its upcoming November gathering, and hand over the primary planning for the event to the Courage Apostolate.  The men of Courage have a lot they can teach our prelates about how to lead lives of sexual purity.

The bishops need to learn the importance of leading chaste lives from same-sex attracted laymen who successfully do so.  They need to humbly listen and learn.

They need to hear the testimonies of guys like Daniel Mattson and Paul Darrow who deliver a far clearer message about rejecting being gay as well as the entire gay culture which the prelates have allowed to worm its way into the dioceses, schools, the priesthood, and in some cases, their own lives.

The bishops need to sit and listen to lay Catholic psychology experts like Dr. Paul McHugh and Dr. Rick Fitzgibbons, who deal with issues of homosexuality and transgenderism in the church.  The bishops need to humbly listen not as pastors picking up pointers, but as patients.

They need to hear from Dr. Gerard van den Ardweg, Europe’s foremost expert on homosexuality, pedophilia, and gays within the Catholic priesthood.  If they’ll listen, he  can help them understand that “homosexuality and pedophile homosexuality” are not only” sexual neurosis,” they are a “sickness of the soul.”

The bishops also need to hear from Dr. Jennifer Roback Morse, founder of the Ruth Institute, who for years has been ministering to and telling the stories of the survivors of the sexual revolution.  For whether wittingly or not, our bishops have often stood by as the sexual revolution has wreaked havoc on the Church.

Prelates like McCarrick would also do well to hear from members of a “Men’s Purity Group” like the one at my parish, where guys help and hold each other accountable when tempted with sexual impurity, where there is a real opportunity to avoid sin.  Such friendships are a great source of strength.

For the final day of the USCCB’s fall meeting, the bishops should be led in a corporate examination of conscience focusing on how they have personally permitted the normalization of homosexuality within the Catholic Church, followed by a public repentance.

Nothing short of this will do.