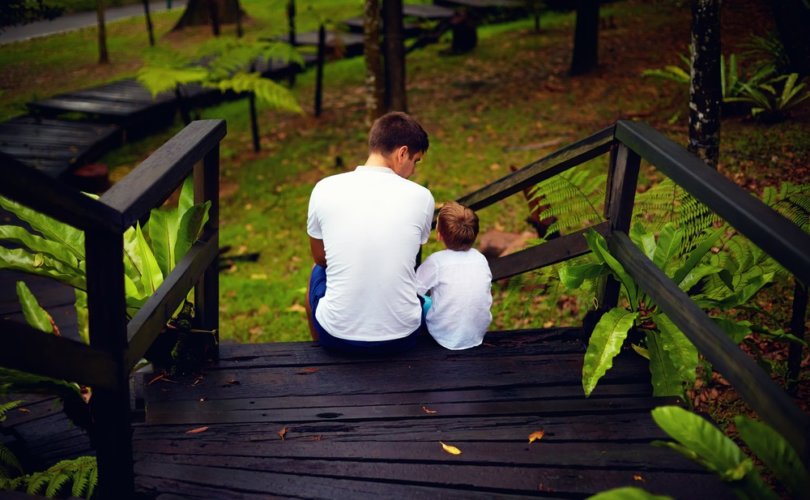 January 30, 2020 (LifeSiteNews) — In my last article, I spoke of ways in which we can talk to children about the goodness, fittingness, and beauty of human sexuality as God created it, and I suggested three themes under which one might approach the subject.

Our Lord Jesus Christ says: “God alone is good.” Every creature can fail, and this includes every human being and every member of the Church, from the least to the greatest. God does transform us by His grace, but He does not force us to be good, much less to be perfect. We have to be willing to work with His grace. St. Dionysius says: “Good happens in one way, evil in all manner of ways.” It’s hard to get things right but easy to get them wrong. So we should somehow convey to children and young adults, when talking about evils, that in this vale of tears we will always be running up against greater or lesser evils, but that we can still know the good, love it, and work toward it — and help others toward it as well.

Talking about good things, even when they are delicate, is relatively easy. The worst job a parent has, in my opinion, is talking about evil — especially the sexual disorders and deviations that constantly show up in the news.

Sometimes a man and a woman get together — but they’re not married, and they’re not husband and wife. But they act like they’re married, and God gives them a baby, even though they weren’t supposed to be acting like that at that time. God is asking them to take responsibility for the baby and to make big sacrifices for it.

Sigh. Complicated and not even coherent. Sin is a mess and makes a mess. Or how about this?

There are people who are so confused and hurt that they don’t actually want to be mommies and daddies, so they do stuff to prevent God from giving them a baby. It’s like keeping the windows shut or the doors locked so a needy person can’t get in. This makes them lonely and miserable, and it’s very wrong of them to do it.

It deteriorates from here.

Some people, sadly, are not able to have children in the natural way God intended, but instead of accepting this cross or adopting children who need a home, they forcibly make a child inside a glass test tube using material taken from the mother and father.

I remember dreading the first time the subject of abortion would come up with a child who was unaware of it. It’s just so unspeakably evil. What do you say?

There are mommies who want their babies to be killed, or who are pressured into it by bullies. They get someone to go into their womb and chop up the baby and suck it out with a kind of vacuum cleaner. Or they take a pill that poisons the baby. And there are so-called doctors who kill thousands of babies as their regular day job. One such doctor died, and they found over 2,000 dead babies collected in his backyard.

No! One cannot say such a thing. Somehow, one has to find a way to explain it, since it will unavoidably come up. Or how about homosexuality?

There are some men who are so confused that they like other men, and there are women who like other women — I mean, not just as friends, but in the way mommies and daddies like each other.

It only gets worse with transvestites, “sex change” operations, homosexuals “renting” eggs, sperm, and someone’s womb in order to “have” “their own” child… Such things are repugnant even to think about, let alone verbalize. Truly, in this realm of sexuality, the catastrophe of the Fall shows itself most outrageously, with as many heads as the Hydra.

People often say: “Truth is stranger than fiction.” Today, rather, we might say: “Perversion is stranger than truth.” Children will have an instinctive revulsion at perversions; it is only adults who are jaded enough to be unmoved. As a result, your kids are likely to be very judgmental about these evils — and that is a good thing. God demands of us judgment between good and evil, and we must be very clear that good is good, and evil is evil; woe to those who call good evil and evil good, says the prophet Isaiah (5:20). But we can also teach compassion for the sinner by saying: People who do these things are terribly confused, usually very wounded people, with no guidance and bad examples, and are causing themselves and others a lot of suffering. What they are doing is evil, but they are still God’s creatures and they can turn away from their sins to God again.

As I wrote in a different context:

We should always encourage praying for the conversion of any sinner we are talking about, or praying for the end of a certain evil — even pausing the conversation at that very moment to pray an Our Father or a Hail Mary or some other prayer. This makes it clear that, just as we learned what was right and wrong from God (either by natural law or divine law), so we are entrusting the problem to God and not acting on the basis of our own rightness or righteousness, or as if we could fix it ourselves.

As a general rule — if we are talking about homeschooled children — it is when the children themselves bring up a topic that they are ready to talk about it; if they do not bring it up, it’s okay to let sleeping dogs lie, up to a point. There is no need to wake them up prematurely to the fact that the world is not only shattered by the Fall, but in an aggressive growth phase of certifiable madness.

On the other hand, children who are enrolled in schools, whether public or private, secular or religious — and it is becoming increasingly difficult to justify the morality of keeping them in any kind of school, given what is happening among peer groups with unlimited access to social media and, often enough, to the curricula they are made to study — will encounter these evils earlier, and usually long before it would be optimal for them to have to know about them. Parents in that case will need to be much more vigilant and be prepared to discuss any sort of topic at any time. I know of a family that followed the excellent practice of gathering their children every night around the living room to discuss what came up that day in school, especially things that bothered the kids or sounded “off” to them. Since the kids had been well catechized by their parents and the household followed a “low-tech” approach, the kids were happy to sit down and talk about their day, not distracted by their phones, and had a pretty good sense of when they were being fed nonsense in the classroom. As a result, the parents were able to identify and refute errors before they had a chance to sink in their roots.

Occasionally one hears about parents whose strategy is (or was) to avoid all discussion of sexuality, sexual morals, and immoral behavior. Perhaps they thought this was the more modest approach. I can assure you that this approach is not modest, but devastating and destructive. Children will learn about such things either from their parents, who are equipped by Almighty God with the graces to lead them aright, or from the surrounding culture — which generally means from those who have a vested interest in creating new slaves to vice. Perhaps in a saner age, it would be different, but today’s parents cannot avoid taking a strong role in home education.