How coronavirus may have just saved countless preborn babies in Maryland

A bill adding abortion as a right in the state constitution was unexpectedly pulled to the delight of pro-lifers.

ANNAPOLIS, Maryland, March 11, 2020 (LifeSiteNews) – In a surprise move, a bill being considered by the Maryland Senate to permanently enshrine abortion as a right in the state’s constitution was abruptly withdrawn today due to concerns about the coronavirus.

This means that in an ironic twist, the coronavirus may have just saved countless lives that would have been lost had the bill passed. Pro-life advocates who had traveled to the Annapolis State House today in order to testify against the measure were ecstatic at the unexpected demise of the bill.

Although the term “Abortion” is not mentioned in the measure – known as the “Declaration of Rights - Right to Privacy” Act – the bill sought to anchor a right to abortion in the “natural, essential, and inherent right to privacy that guarantees freedom from government intrusion.” The effort follows the same formula for justifying abortion that was utilized by the U.S. Supreme Court in its landmark 1973 Roe v Wade decision, in which the Court “discovered” a right to abortion not in the U.S. Constitution, but in the shadowy area surrounding it where a suggestion of that right was said to exist within a woman’s right to privacy.

Now that there’s a chance that the U.S. Supreme Court could revisit Roe v Wade and overturn it, Maryland’s liberal legislators have joined those in other states seeking to find a way to establish a right to abortion in the event that federal protections dissappear.

The bill’s sponsor, Sen. Susan Lee, D-Montgomery County, officially withdrew the measure – SB664 – from consideration during this year’s legislative session with a short letter to the Chairman of the Senate Judicial Proceedings Committee, saying she wanted “to spare the committee a long debate, that largely strays from the underlying intent of this bill.”

The “long debate” she anticipated which she suggested would stray “from the underlying intent of the bill” was due to the threat of testimony by pro-life advocates who saw through the bill’s wording to its true intent: Enacting a consitutional ammendment to kill children in utero at will.

“In addition, the concerns surrounding the coronavirus has limited the ability of our panel to participate at the hearing today,” wrote Senator Lee. 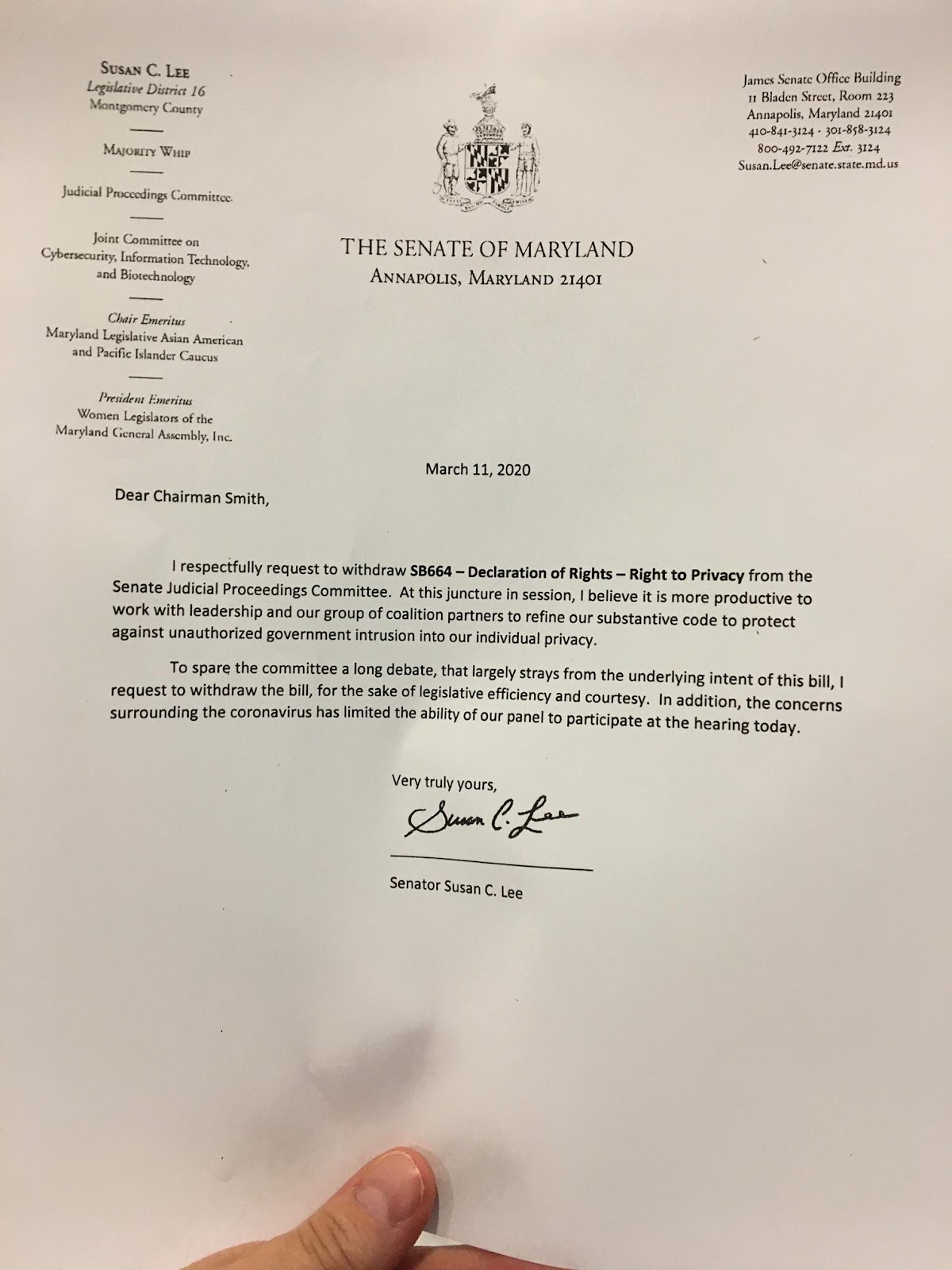 Maryland House of Delegates member Dan Cox, R-Frederick County, while lauding the potential of the bill to protect against the unauthorized collection of data of individuals, asserted last week that the bill was “fatally flawed.”

In a March 2 letter to the members of the Senate Judicial Proceedings Committee, Cox noted that “in SB664 Maryland seeks to take a first-in-the-nation approach to broadly make Abortion enshrined forever in the first clause of Article 48 of our Delcaration of Right. “Guaranteeing freedom from government intrusion on grounds of natural rights’ denies the right to life, since the laws of nature and the 5th and 14th amendments of the United States Constitution mandate protection of the right to life under law.”

While the measure is dead for the remainder of this year, the bill is expected to be resurrected in the 2021 Maryland Legislative Session.