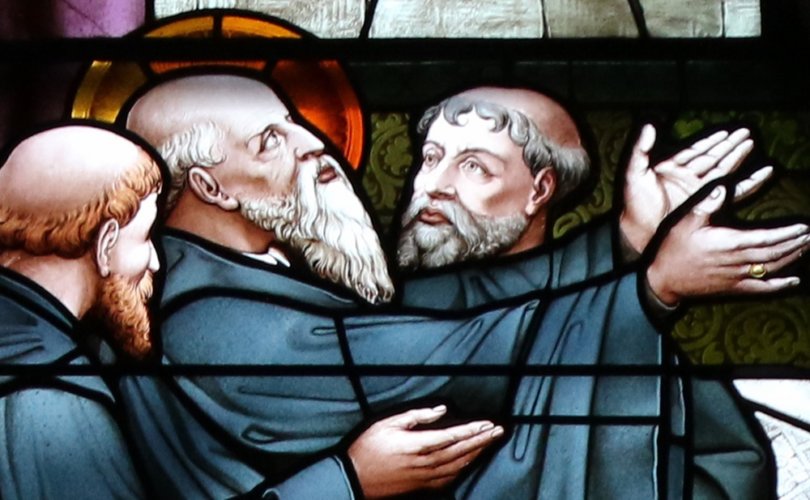 March 21, 2019 (LifeSiteNews) – Today, March 21, is the dies natalis or heavenly birthday of St. Benedict of Nursia, the great Father of Western Monasticism and Co-patron of Europe. Can a monk who lived 1,500 years ago have anything relevant to teach us today?

Not only does he have much to teach us, but the very fact that he lived so long ago gives him a special advantage in this regard. For, as C.S. Lewis says in his preface to St. Athanasius’s On the Incarnation, moderns—that is, people who are all living at the same time—tend to be imprisoned in a whole set of assumptions about the ways things are or must be or should be, taking them for granted and not even being aware of any alternatives; whereas the ancients, operating by a completely different set of assumptions than ours, are in a position to confront, question, undermine, even shatter our assumptions. He concludes that the more old books we read, the more self-knowledge, self-critique, and self-improvement will become possible for us. The irony is that only old things can make us new, while exclusively new things will make us grow old in our foolish ways.

A marvelous example of this phenomenon would be the modern campaign against silence—yes, let us call it a campaign, for it is conducted like warfare that takes no prisoners. Cardinal Sarah, as we know, has spoken eloquently—and, what is far more difficult, out of a deep faith and spirit of adoration—about the dictatorship of noise in secular life and increasingly in the domain of the sacred. It is becoming harder and harder to find any quiet place in the world: cafes and restaurants pump in music so loud that one can barely hear the person across the table; shops, stores, offices, facilities of every description seem to be acting under a cosmic memorandum to avoid silence at all costs; if the ambient noise is inadequate, ubiquitous earbuds will ensure an uninterrupted flow; even many parks and recreational areas have their sweet peace nibbled away by the sound of automobile traffic and airplanes crisscrossing the sky. As if this were not challenging enough to health of mind, one can rarely find a Catholic church building or liturgy that respects the profound human need for silent recollection in the presence of the living God, who speaks tenderly to the receptive heart.

A friend of mine and I were once discussing the question “which is better at Mass, silence or music?” He wrote as follows:

What defines a silence are the noises around it, as a frame defines a door. The silence one hears just after a crash and just before a scream is defined by the crash and the scream. The silence that comes after Gregorian chant and before the priest’s sacred announcement is defined by the music before it and the words following. So in the end, one cannot choose between music and silence, because music is what defines the silence as this kind of silence rather than that. One may as well ask whether we should prefer the silhouette or the white paper around it.

When I am at a high-entertainment Mass with guitars and yodeling music, the silence between the sounds has a definite and nameable character: it is dead time. It is the silence we hear between acts. Properly sacred music at Mass—Gregorian chant, polyphony, classic hymnody, organ instrumentals—acts as a frame around the silence and so defines it as sacred silence, as densely meaningful, ready to be filled with prayer. Conversely, silence at Mass acts as an internal direction or weight for the music and so keeps it anchored in the eternal stillness, the “Word without a word…”

St. Benedict understood all these things extremely well, as we can gather from his Holy Rule, where he speaks in many places about the necessity and importance of silence. Most characteristic are his words about the oratory or chapel: “As soon as the Work of God [the liturgy] is finished let all reverently leave the oratory, in complete silence, so that any brother who by chance wishes to pray individually may not be hindered by another’s misconduct” (Rule, ch. 52). Benedict understands that the liturgy is meant to carve open within us a space for God and a space for silence, so that our prayer, the conversation of loving friends, can blossom.

The patriarch of monks also tells us: “Monks ought to be zealous to keep silence at all times” (Rule, ch. 42). This may seem initially to be an exaggeration, when we consider how many hours a day monks devote to corporate chanting of the divine praises at Mass and in the Office, and how much their recreation or their hospitality may call upon them to speak to others. How can the monks be keeping silence “at all times”? Upon deeper reflection, the Rule inclines us to see vocal prayer and charitable conversation, done in the right spirit, as themselves stemming from and filled with the silence of a heart recollected in God’s presence and aspiring to His service. They are, in other words, a translation of that interior silence into chants and words; they share in the peace of God and increase it in one’s surroundings.

Benedict insists nevertheless on literal silence throughout the night and, whenever possible, during the day. In the richly rewarding chapter 4 of the Rule, concerning “the instruments of good works” (which can serve as the basis for an excellent examination of conscience), he provides us with a negative reason based on fallen human nature, and a positive reason based on the lofty aim of the Christian life.

Benedict recognizes that, sinners as we are, we are far too often “given to grumbling,” detraction, “evil or depraved speech,” excessive talk—and that these things make it difficult for us “to listen with a good will to holy reading” and “to be frequently occupied in prayer.” Although he does not mention it, the same difficulty arises from any useless, frivolous, or distracting noise in our environment.

But why should we want to “listen to holy reading” and “be occupied in prayer”? The same chapter establishes the goal: so that we may “become a stranger to worldly deeds,” put our hope in God, and “prefer nothing to the love of Christ.”

For many of us living in the world, these phrases establish a glowing ideal, always imperfectly realized. Still, one cannot reach a distant destination without taking steps, be they small or great, to reach it. A peaceful, recollected heart, full of silent love, drinking the cup of the Lord and tasting the sweetness of His victory in the bitterness of suffering—this is where we want to end up. If we are going to get there, we must begin here, now, today, with carving out more time, more space, for silence in our lives.