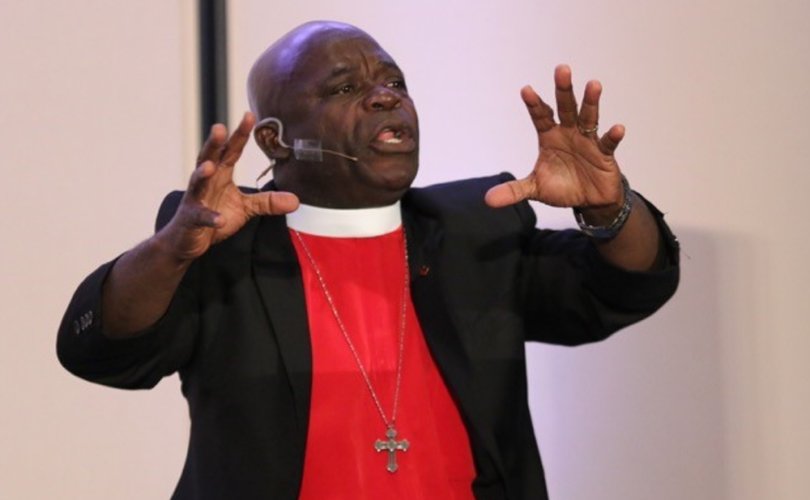 March 1, 2019 (LifeSiteNews) – Despite a concerted campaign by LGBT activists and liberal clergy, earlier this week the leaders of the United Methodist Church rejected the so-called “One Church Plan,” which would have permitted individual churches to decide whether or not to permit same-sex “weddings” and LGBT clergy, at their General Conference in St. Louis, Missouri. Delegates from around the world voted down the proposal and voted instead on Tuesday afternoon for the “Traditional Plan”—which would maintain the current rules of the United Methodist Church—by a margin of 438 to 384.

The decision came as a shock to many, as the Council of Bishops had recommended that the General Conference pass the One Church Plan in response to a growing number of vocal gay clergy inside the Methodist fold as well as intense pressure from LGBT members who insisted that Christianity should be conformed to their beliefs rather than the other way around. One delegate, the Rev. Tom Berlin of Virginia, actually stated that to remain committed to the biblical view of sexuality would be to put “a virus into the American church that will make it very sick, and it will be sick quickly.”

Additionally, Berlin warned the Conference, if delegates did not vote to abandon the biblical standard for sexuality, many churches would leave the United Methodist Church, and many liberal clergy members would simply ignore the vote and perform same-sex “weddings” anyway. “There will be trials, it will be in the news,” he warned in what sounded like a thinly-veiled threat. After heated debate, however, the liberal faction of the General Conference lost.

It should not be exceptional that a church conference has rejected unbiblical sexual practices, but at a time when nearly all mainline liberal Protestant churches are abandoning the Bible for the rainbow flag, it actually does come as a surprise. Interestingly, one of the key reasons that the traditionalists won at the United Methodist Conference has been ignored by nearly all of the news outlets reporting on the vote: The African Methodists stood up in defence of biblical teaching and rejected the change in no uncertain terms.

On the Saturday before the vote, Dr. Jerry P. Kulah, Dean of Gbarnga School of Theology at the United Methodist University in Liberia gave an incredible speech at the Reform and Renewal Coalition Breakfast of the United Methodist Church General Conference. His remarks were a stunning rebuke to those who were trying to mangle Christianity and do away with biblical principles. Here are a few powerful excerpts from a long speech (and it really is worth reading the whole thing):

I thank God for His precious Word to us, and I thank him for you, my dear sisters and brothers in Christ…As I understand it, the plans before us seek to find a lasting solution to the long debate over our church’s sexual ethics, its teachings on marriage, and its ordination standards.

This debate and the numerous acts of defiance have brought the United Methodist Church to a crossroads (Jeremiah 6:16). One plan invites the people called United Methodists to take a road in opposition to the Bible and two thousand years of Christian teachings. Going down that road would divide the church. Those advocating for the One Church Plan would have us take that road.

Another road invites us to reaffirm Christian teachings rooted in Scripture and the church’s rich traditions. It says, “All persons are individuals of sacred worth, created in the image of God,” that “All persons need the ministry of the Church,” and that “We affirm that God’s grace is available to all.”

It grounds our sexual ethics in Scripture when it says, the UM Church does “not condone the practice of homosexuality and considers [it] incompatible with Christian teaching.” While “we commit ourselves to be in ministry for and with all persons,” we do not celebrate same-sex “marriages” or ordain for ministry people who self-avow as practicing homosexuals. These practices do not conform to the authentic teaching of the Holy Scriptures, our primary authority for faith and Christian living.

However, we extend grace to all people because we all know we are sinners in need of God’s redeeming. We know how critical and life-changing God’s grace has been in our own lives. We warmly welcome all people to our churches; we long to be in fellowship with them, to pray with them, to weep with them, and to experience the joy of transformation with them.

Friends, please hear me. We Africans are not afraid of our sisters and brothers who identify as lesbian, gay, bi-sexual, transgendered, questioning, or queer. We love them and we hope the best for them. But we know of no compelling arguments for forsaking our church’s understanding of Scripture and the teachings of the church universal.

And then please hear me when I say as graciously as I can: we Africans are not children in need of western enlightenment when it comes to the church’s sexual ethics. We do not need to hear a progressive U.S. bishop lecture us about our need to “grow up.” Let me assure you, we Africans, whether we have liked it or not, have had to engage in this debate for many years now. We stand with the global church, not a culturally liberal, church elite, in the U.S.

We stand with our Filipino friends! We stand with our sisters and brothers in Europe and Russia! And yes, we stand with our allies in America. We stand with farmers in Zambia, tech workers in Nairobi, Sunday School teachers in Nigeria, biblical scholars in Liberia, pastors in the Congo, United Methodist Women in Cote d’Ivoire, and thousands of other United Methodists all across Africa who have heard no compelling reasons for changing our sexual ethics, our teachings on marriage, and our ordination standards!

We are grounded in God’s word and the gracious and clear teachings of our church. On that we will not yield! We will not take a road that leads us from the truth! We will take the road that leads to the making of disciples of Jesus Christ for transformation of the world! I hope and pray, for your sake, that you will walk down that road with us. We would warmly welcome you as our traveling companions, but if you choose another road, we Africans cannot go with you.

Dr. Kulah went even further when he addressed the idea that African Methodists might vote with the liberal American delegates in order to retain much-needed financial assistance:

Some Africans have been told that if a gracious exit petition is passed our evangelical friends in the U.S. will go their own way and no longer support efforts in Africa. That is not true.

Many of us in Africa have developed deep and long lasting friendships with our brothers and sisters in the U.S. Those relationships will not be severed if a gracious exit petition passes.

Unfortunately, some United Methodists in the U.S. have the very faulty assumption that all Africans are concerned about is U.S. financial support. Well, I am sure, being sinners like all of you, some Africans are fixated on money.

But with all due respect, a fixation on money seems more of an American problem than an African one. We get by on far less than most Americans do; we know how to do it. I’m not so sure you do. So if anyone is so naïve or condescending as to think we would sell our birth right in Jesus Christ for American dollars, then they simply do not know us.

We are seriously joyful in following Jesus Christ and God’s holy word to us in the Bible. And in truth, we think many people in the U.S. and in parts of Europe could learn a great deal from us. The UM churches, pastors and lay people who partner with us acknowledge as much.

Please understand me when I say the vast majority of African United Methodists will never, ever trade Jesus and the truth of the Bible for money…We will persevere in the race before us. We will remain steadfast and faithful. And some day we will wear the victor’s crown of glory with our King Jesus! Come walk with us! In the name of the Father, the Son, and the Holy Spirit, Amen!

Dr. Jerry Kulah is another example of what Nigerian pro-life activist Obianuju Ekeocha has been writing about for some time, most recently in her seminal book Target Africa: Ideological Neo-Colonialism in the 21st Century. It is the West, she points out, that is attempting to consistently force new sexual ideologies and abortion into African nations, against the will of the African people who still largely reject these ideologies. The West is using foreign aid to force their new values on people who do not agree with them, and it is often African nations that end up voting against Western proposals on sexuality and abortion at the United Nations.

A century ago and beyond, the West was sending missionaries into the heart of Africa to bring the Word of God to those who lived there. In this century, the West may well need to be evangelized by the descendants of those who first heard the Gospel from those brave missionaries—but unlike the rising generation in the West, have actually remained faithful to it.

Jonathon’s new podcast, The Van Maren Show, is dedicated to telling the stories of the pro-life and pro-family movement. In his latest episode, he interviews Walt Heyer who once lived as a “woman” until he realized it was all a lie. You can subscribe here, and listen to the episode below: