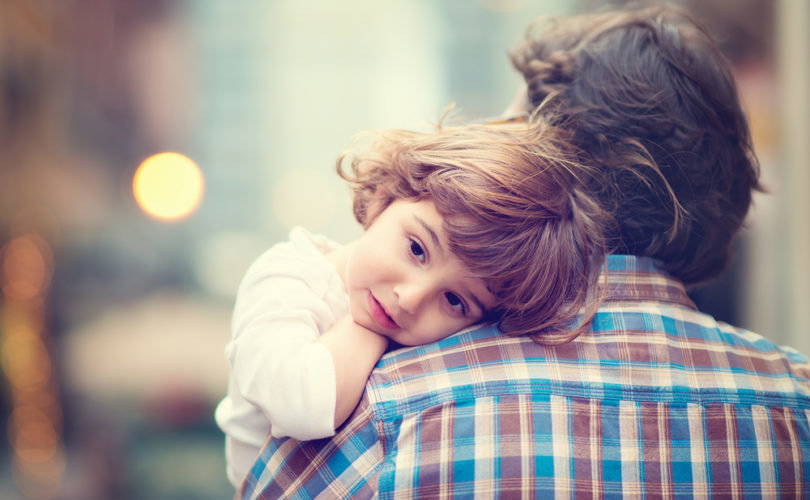 June 13, 2019 (LifeSiteNews) — Because he is not related to his children with emotional or physiological ties of the same intensity as a mother’s, the father of a family is in an extremely precarious position. Either he can run away from his responsibilities as ruler and teacher of his children or he can all the better fulfill them due to his inherent manly authority. His position is one of danger and promise. One might say the qualities that render a man fit to be a good ruler and teacher — his natural distance from much of what constitutes the bearing and rearing of children, his ability to look upon his own offspring as “other” than himself, present to him more through their mother — these and other aspects of male psychology open up the possibility of failure, even of treachery.

The French philosopher Gabriel Marcel (1889–1973), a perceptive writer on this subject, writes: “Fatherhood nearly always presents the character of a more or less hazardous conquest, which is achieved step by step over difficult country full of ambushes.”

The father has a pivotal, non-transferrable part to play in the founding and preserving of the home. Fatherhood rightly lived involves continuous presence to others, living for others, being “on call” 24hours a day. Because living out this commitment does not come as naturally to men as it does to women, it proves to be all the more crucial for the stability of the family as a community. If a man does not live up to his vocation to found a family, a permanent community of love, as the legendary Aeneas is said to have founded Rome by plunging his sword into the ground where the city would stand, then woman will have no one to turn to as pillar and foundation. In a world of broken or nonexistent homes, the lifeblood of love, promises kept, which should permeate the family like an unspoken shared secret, is replaced with a psychological promiscuity, a haphazard shifting of allegiance that manifest itself as fragmentation and dissipation. Child-bearing, child-rearing, and the countless cares that make the house a home will increasingly appear to the woman as intolerable burdens, affronts to her freedom, instead of expressions of loving commitment.

Fatherhood thus verifies, in a twofold way, the paradox spoken by Christ: “He who would gain his life must lose it for my sake.” To bring life, that is, purposefulness and inner joy, to his family, a man must learn to lose himself, against his fallen tendency to overrate his own achievements and advancement. This is another way of saying that responsibility and suffering are inseparable in the living out of any love worthy of the name. “It behooves the man to place himself at life’s disposal and not to dispose of life for his own purposes” (Marcel). In losing himself for the sake of his wife and children, he wins back, over time and not without steady struggle, a self purified of egotism and false liberty. In this way, the divine principle of creation — God’s love, guaranteed by His promise of love — is engrafted onto the family, or even better, becomes its lifeblood. Marcel again:

We can state without hesitation that the limitations and deformations to which the fatherly feeling is liable tend to disappear in large families, and one might say that this is like the reward, the immanent sanction, of the act of prodigality by which a man generously sows the seeds of life[.] … By the multiplicity, the unpredictable variety of the relationships which it embraces, the large family really presents the character of a creation; there is a direct relation between the persevering and often literally heroic effort by which it is built up, and the new wealth, the wealth of life, which it receives.

The connection between man’s identity as father to his children and God’s identity as Father to His people is not coincidental. From the beginning, the Creator revealed Himself under the image of the spousal covenant. The Almighty is both Bridegroom and Father. He chooses the Church as His bride; with her He begets spiritual children. The relation we call being a father is rooted in the deepest ground of who a man is and reaches out to embrace wife, children, and home. In this dynamic correlation between one’s own being and the outpouring of love to another, we catch a faint glimpse of the heavenly Father eternally giving rise to the Son, with the Holy Ghost proceeding from both like a breath or flame of love.

Every time man succeeds in “founding the church” within the bounds of his home, he has furthered in a definite way the continual establishment of the Church of Christ, oriented to the consummation of the Kingdom of God. Thus, it is of the essence of fatherhood to advance the work of God, the continual and arduous effort of “making all things new” (2 Cor. 5:17) in Jesus Christ, who declared: “And I, if I be lifted up from the earth, will draw all things to myself” (Jn. 12:32). The Incarnation of the Word reveals the final purpose of God’s intervention in human history: the reclaiming of the fallen universe, the re-creation of all in the Image of the Father.

These profound truths do not leave human fatherhood unaffected. The man who rules and serves the family should especially strive to imitate the providential, gratuitous love of the heavenly Father for His creation and for His espoused people. In so doing, the father secures himself from the danger of aloofness and tepidity, his wife from the loneliness and monotony of duty, his children from the temptation of revolt and ingratitude. Thanks to Our Lord’s teaching, example, and gifts of grace, a husband and father learns to perceive the distant but all-important end for the sake of which he supports new life in the bosom of his family: to make present anew the supreme mystery of Love, the Love that God is. The husband and father extends the dominion of God’s Fatherhood, the empire of Christ the King and Bridegroom.