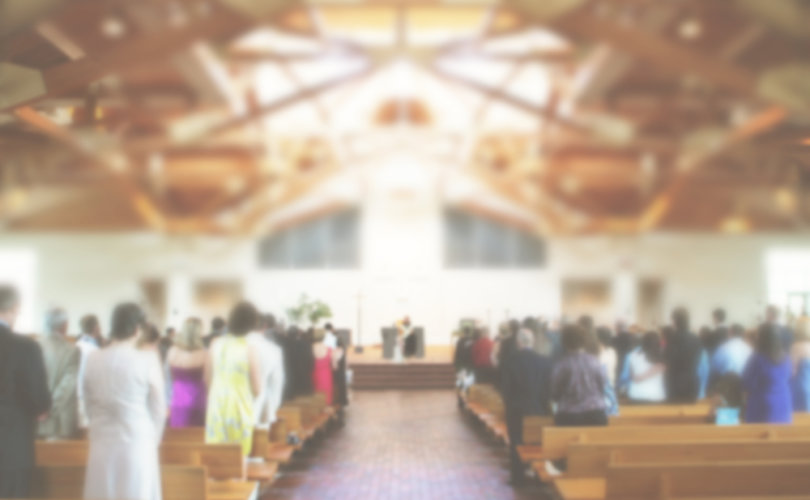 February 28, 2019 (LifeSiteNews) – An alien from outer space studying the Catholic Church of the last few decades might be puzzled at the frequency and apparent significance of the phrase ‘felt banners’ in Catholic discourse. It seems to sum up much of what is wrong with the Church, at least for many Catholics, but it is rarely explained. It doesn’t need to be, because we have all seen these objects, and we know the significance of the attitudes and processes which led to their production and display.

If I wanted to explain to Zog the Martian what is at issue when felt banners come up in conversations among Catholics, I might say that ugly and inappropriate items of church decoration exemplify and have come to symbolize an attitude of hostility towards objective standards of beauty, excellence, and truth. Zog, however, might find this explanation even more strange than the items themselves. How on earth did such an attitude come to be held by people in the Church, let alone by those with power over what gets hung on the walls of places of worship?

Familiar as the phenomenon is, it is useful to try to articulate what is at issue. The partisans of felt banners do not necessarily prefer ugliness over beauty. Their concern, rather, is to prioritize the contribution to church decoration of the artistically incompetent over that of the artistically competent. Because the latter might be paid, or might not be members of the parish, or might be long dead, their contribution has less value seen as a form of participation in community life. Indeed, the artists who beautified the Catholic churches of yesteryear, and the few who still place their expertise and judgment in the service of the Church, were and are not thinking of their work primarily in terms of community participation, but in terms of objective standards of devotional appropriateness and of artistic excellence.

The contribution of the artistically incompetent is valued because, for those people, their making of the felt banners represents a kind of participation. In exactly the same way, it is felt that incompetent singers should not be removed from a church choir, because the quality of their singing is secondary to the ‘participation’ which their singing represents. Again, on these principles, nothing should be sung in church which cannot be sung by the whole congregation, because it would be wrong to exclude any members of the congregation from this form of participation. As many people as possible should be recruited for ‘ministries’, such as distributing Holy Communion or bringing up the gifts, lest they not be able to ‘participate’. Equally, it would be wrong to exclude females from the serving team: whatever the theological arguments over that might be, the value of participation trumps them.

This understanding of ‘participation’ is a strange one. Does one not participate, or even ‘actively participate’, in Mass through attending as an ordinary member of the congregation, uniting oneself in prayer with the offering of the Mass? What does it add, to this, to have disfigured the church with felt banners, or have some, perhaps pointless, little job to do?

The novel conception of participation is so widespread, however, that it has even crept into official documents of the Church. An extreme example came from the Congregation for Divine Worship in 1987, which told us that “musical compositions which date from a period when the active participation of the faithful was not emphasized as the source of the authentic Christian spirit are no longer to be considered suitable for inclusion within liturgical celebrations.”

What period of music would that be? Was this period not included when the Second Vatican Council declared that “The musical tradition of the universal Church is a treasure of inestimable value”, or “The treasure of sacred music is to be preserved and fostered with great care.”?

[F]ull participation does not mean that everyone does everything, since this would lead to a clericalizing of the laity and a laicizing of the priesthood; and this was not what the Council had in mind. The liturgy, like the Church, is intended to be hierarchical and polyphonic, respecting the different roles assigned by Christ and allowing all the different voices to blend in one great hymn of praise.

Active participation certainly means that, in gesture, word, song and service, all the members of the community take part in an act of worship, which is anything but inert or passive. Yet active participation does not preclude the active passivity of silence, stillness and listening: indeed, it demands it. Worshippers are not passive, for instance, when listening to the readings or the homily, or following the prayers of the celebrant, and the chants and music of the liturgy. These are experiences of silence and stillness, but they are in their own way profoundly active. In a culture which neither favors nor fosters meditative quiet, the art of interior listening is learned only with difficulty. Here we see how the liturgy, though it must always be properly inculturated, must also be counter-cultural.