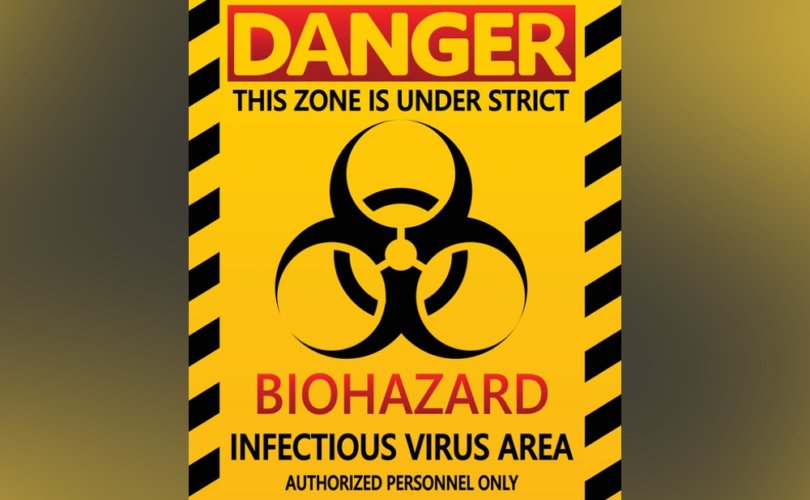 April 30, 2020 (LifeSiteNews) – The French government has been notably restrained in their criticism of the Chinese Communist Party (CCP) for unleashing a pandemic upon the world.  One possible reason for their reticence is a single, highly embarrassing fact: They essentially built the Wuhan Institute of Virology’s P4 lab in which the coronavirus now sweeping the world was being researched, and from which it escaped.

That the French delivered the turn-key, high-containment biolab to China has long been public knowledge, but now a German newspaper, the Frankfurter Allgemeine Zeitung, has added riveting details to the story.  The insider information comes from interviews with French scientists directly involved with the effort.

The picture they paint of the lab’s origins and operations is, to say the least, disturbing.  It tells us a lot about why we are currently in the midst of a pandemic.

The French government agreed to construct the state-of-the-art lab on condition that scientists from the two countries would collaborate on joint research projects there.  The French were to have a significant presence.  According to the terms of the agreement, no fewer than 50 French researchers were to have taken up residence in the apartment building attached to the lab, where they would work on a daily basis.

The construction of the Wuhan lab was completed by February 2017.  This was such an important moment in the history of Sino-French relations that the French premier, Bernard Cazeneuve, personally traveled to Wuhan for the ribbon-cutting ceremony.

To the surprise and consternation of the French, that ceremony marked the effective end of the “research partnership” that the opening of the lab was supposed to inaugurate.  Now that China had the P4 lab and technology it wanted, it promptly stiffed its foreign “partner” and tore up the agreement it had signed.

Not a single French researcher was allowed to take up residence in the compound and do research at the lab.

The Chinese betrayal went largely unremarked by the embarrassed French government.  When asked about it on French radio, the former French Health Minister, Marisol Touraine, said only, “This is really unfortunate, since we wanted to share our knowledge.”

To which one might respond: “You already have shared your knowledge, to the world’s great detriment.

Another notable who attended the ribbon-cutting ceremony was Dr. Shi Zhengli, who is known as China’s “batwoman” for her work with bat coronaviruses.  Dr. Shi has long had a French connection, having received her PhD at the University of Montpellier in France in 2000.  In the run up to the opening of the Wuhan P4 lab, she received many months of intensive training at France’s only P4-lab, the Jean-Mérieux-Lab located in Lyon.  She was the one who—after the French were sent packing–was supposed to ensure that the staff was properly trained in the strict safety protocols of P4 labs and see that these were always carefully followed.

Shi Zhengli admitted to Scientific American that she initially wondered whether the coronavirus could have come from her lab.  She was greatly relieved, she says, after a careful examination of her research records revealed that “none of the sequences [of the CCP Virus] matched those of the viruses her team had sampled from bat caves.”

Since no foreign researchers, French or otherwise, have been allowed to conduct research at Dr. Shi’s lab, or to independently examine her research records, we currently have no way to directly verify that this is so.  And with the Communist Party “disappearing” those who deviate from the Party line, no Chinese witnesses to this fact are likely to come forward.  It might well cost them their lives.  As for Dr. Shi herself, China’s batwoman probably does not want to become known as China’s plague-woman.

More details about the French lab fiasco come from a book called France – Chine: Les Liasons dangereuses by the French expert on China, Antoine Izambard.  He states that the Chinese systematically sidelined the French from the very beginning of the construction of the lab.  Once the French engineers had turned over the blueprints, Chinese equipment suppliers suddenly moved in, undercutting the prices offered by French suppliers by cutting corners and using materials of low quality.

Red flags immediately began to be raised.  The French company Technip, that was supposed to certify that the Wuhan lab was constructed according to the standards of the P4-lab of Lyon, refused to give approval.

Hervé Raoul, the director of the French P4-lab in Lyon that served as a model for the Wuhan lab, visited the facility many times when it was under construction, but professes ignorance about its current operations.  This in itself is extremely concerning, since Herve is listed on the Wuhan institute of Virology’s website as the “Deputy Director” of the “Scientific Advisory Committee of the Center for Emerging Infectious Disease.”  Yet he says now, simply: “There is no French researcher working in Wuhan, and I have no idea how the lab is functioning.”

The only Frenchman to have actually had access to the Wuhan lab since its opening is the microbiologist René Courcol of Lille´s University Hospital.  His job was to have overseen the proper implementation of safety standards in the lab and to certify that they complied with international guidelines.  The WIV’s website notes that Courcol visited the P4 lab in May, 2018, to “evaluate the progress of quality control construction work in Wuhan P4 Laboratory”. He was reported as saying that “He will try assisting WIV in creating a high-level national biosafety laboratory that combines biosafety management and quality control in the future.”

Since at that point the lab had already been researching dangerous coronaviruses for 15 months, this is hardly reassuring.  Even today, more than three years after its opening, the lab has still not been accredited by the WHO.  Dr. Courcol has offered no explanation why this might be so and, perhaps not surprisingly under the circumstances, is refusing requests for interviews.

In other words, from the beginning the Wuhan P4 lab failed to meet international standards.  What this means, according to Izambard, is that “the Wuhan lab’s handling of highly-contagious material was never adequately ensured.”

Given what a disaster for the French the P4 lab in Wuhan has become, it is worth asking why they embarked upon it in the first place.  Like so many other failed public and private ventures in China, it was an effort to increase trade with the Communist giant.  Add to this the fact that France already had close commercial ties with Wuhan, as more than 100 French companies were doing business there.

The stage was set for the P4 lab fiasco back in 2003 during the SARS-epidemic, when Chinese leader Jiang Zemin approached Jacque Chirac for help in building high-containment biolabs.  In response, the French president authorized the export of four medium-containment mobile biolabs, or P3-labs.  He did this against the advice of his own Defense Ministry, which argued that all existing P3-labs in China were under the direct command and control of the People’s Liberation Army and were being used for military purposes.

The French President’s authorization of the construction of a P4 biolab in Wuhan met even fiercer opposition, this time not only from his own Defense Ministry and the French intelligence service, the DGSE, but also from other member states of the European Union and from the United States.  The U.S. had consistently opposed helping China create a P4 lab, and transferring the sensitive technology required to operate it, because of the risk that the facility could be used for military purposes.

I will close with this.  Six months before the official opening of the P4 lab the French Ambassador to China visited the Wuhan Institute of Virology and bestowed a medal on Dr. Shi Zhengli.

Dr. Shi got a medal.  The rest of us got the CCP Virus.